The Australian, who moved from Renault at the end of last season, finished seventh at the Sakhir circuit after qualifying sixth.

• “Post-race we found damage to Daniel’s floor from the impact of Pierre (Gasly) running into the back of his car at the beginning of the race,” said team principal Andreas Seidl. 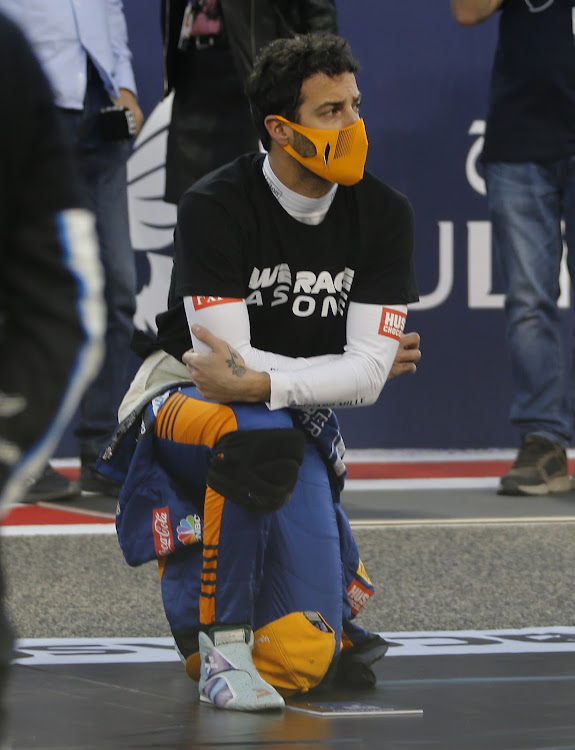 McLaren's Daniel Ricciardo kneels in support of the Black Lives Matter campaign on the grid before the Bahrain Grand Prix
Image: /REUTERS

Daniel Ricciardo raced with a significantly damaged car on his McLaren debut in Bahrain last weekend, the Formula One team said on Tuesday.

The Australian, who moved from Renault at the end of last season, finished seventh at the Sakhir circuit after qualifying sixth.

“Post-race we found damage to Daniel’s floor from the impact of Pierre (Gasly) running into the back of his car at the beginning of the race,” said team principal Andreas Seidl.

“The level of damage cost a considerable amount of downforce. Despite the performance loss Daniel used his experience to cope with the issues and score important points for the team.”

British teammate Lando Norris finished fourth in the race with McLaren third in the constructors’ standings.

Meanwhile, Formula One champions Mercedes say their car is not stronger than Red Bull in any one area despite Lewis Hamilton winning Sunday’s season-opening race in Bahrain.

Red Bull’s Max Verstappen was fastest in every practice session in Bahrain and took pole position before finishing second as Mercedes made the most of clever strategy and Hamilton’s skill. Mercedes trackside engineering head Andrew Shovlin said the team were already deep in discussion about what they needed to do better.

“We don’t really have any strengths relative to them, is what I would say,” he added when asked which areas the car needed to improve in. We’ve had a lot of years where we’ve been able to rely on straight-line speed or high-speed cornering or interconnected corners but you look at it here and we weren’t taking any time out of them anywhere.

“In qualifying we’re just bang on their pace in our best corners and they are quicker in the others. So we need a faster car, simple as that.”

Restrictions this year make it harder to add performance, with little time allowed in the wind tunnel and a ban on developing the engine. There are also major rule changes coming next year, with teams set to shift resources to their 2022 cars sooner rather than later.

“We’re having to look at more subtle areas to do with driveability characteristics,” said Shovlin. “This season is actually going to come down to the fine margins more than normal.

Aerodynamic tweaks have also affected those teams such as Mercedes with a low-rake car more than Red Bull’s high-rake philosophy. Shovlin said there was nothing to be done about that.

“What we certainly can’t do is suddenly say we’re going to lift the rear of our car 30mm and work with that because that would write off the season... we’d lose so much in doing that... it’s just not practical.”