Migne praises charges in build up matches ahead of AFCON

• Stars back in continental extravaganza after a 15-year wait 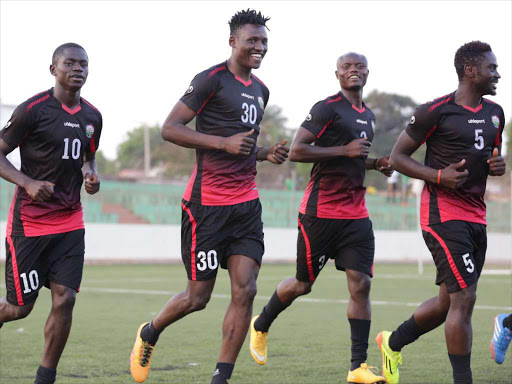 Harambee Stars coach Sebastian Migne has praised his charges for responding to instructions during their pre-Africa Cup of Nations training camp in Paris, France.

Migne observed that Stars players adhered to his tactics during their two international friendly matches against Madagascar and the DR DR Congo.

“These were good performances,” said Migne. “I am impressed by several players especially Ayub Timbe, who understands my philosophy and if this continues, he will be a great player.”

Timbe, who is expected to play a starring role for Stars in Egypt, remains confident that their time together in France did not only solidify their bond but has given them an opportunity to familiarise themselves with the tactics tutored by Migne and his coaching staff.

“We achieved our goal of having a camp in a relaxed and serene environment,” said Migne.

“This was necessary to help us fine-tune ourselves for the tournament. My plea to the Kenyan fans is to rally behind the team because I believe we have the potential to surprise.”

“They have always surprised me as their coach in each and every training and even the matches we’ve played.”

China-based Timbe is among Kenyan players expected to excel in the tournament and he believes that his dream as a young player at JMJ Academy has finally come true.

“It’s the dream of any young soccer player to represent his country at the highest stage of the game, I am not an exception. I can’t wait for the games to begin,” said Timbe.

Stars begin their campaign a clash against one of the tournament favourites, Algeria, who will have starman Riyad Mahrez in confident mood after winning his second English Premier League title with Manchester City, three years after clinching his first with Leicester City.

Three days before Harambee Stars return to continental football for the first time in 15 years, Kariobangi Sharks defender Geoffrey Shiveka has suggested that this could be Kenya’s time.

Shiveka, who was part of the provisional squad while Stars were still in Kenya prior to shifting their training base to France and playing two friendlies against Madagascar and DR Congo, said that the sturdy defence will lead Kenya to good stead in Egypt.

“I believe defence will serve the national team well. We rarely conceded in the qualifiers and given the kind of attackers we have in Micheal Olunga, Ayub Timbe and Eric Johanna, we have a good chance of getting superb results even against teams that are considered strong like Algeria and Senegal,” said the no-nonsense defender.

In the two friendlies, Sebastien Migne’s side scored two goals and conceded once.

“Don’t get me wrong, it’s important that the team keeps a good balance between attack and defence but in tournament situations, if you don’t concede you, don’t lose and that gives you a good platform to work on,” concluded the defender.

Stars touched base in Cairo, Egypt on Tuesday following a 19-day residential camp in France. Kenya played two friendly matches in Europe, winning 1-0 against Madagascar and sharing the spoils in a 1-1 draw with DR Congo.

The team held a light training session yesterday as the clock ticks towards the opening match against Algeria at 11 pm on Sunday.

Harambee Stars are in Group C alongside Algeria, Senegal and Tanzania. Kenya will then line up against Tanzania on June 27, before winding up her group stage matches against Senegal on July 1.