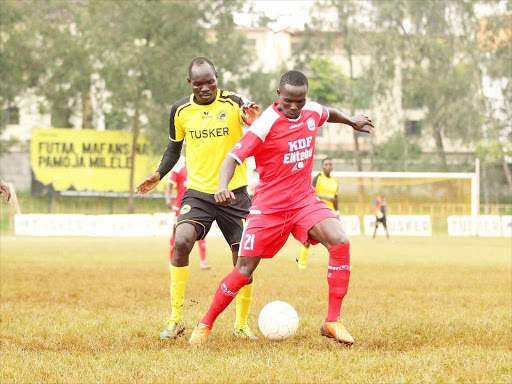 Despite enjoying a large percentage of ball possession and creating numerous scoring chances Ulinzi found themselves trailing five minutes in the 5th minute through Victor Odemba while Steve Wakhanya doubled the hosts’ lead at the stroke of half time.

New AFC Leopards coach Marko Vasiljevic began his tenure at the ‘Den’ with a one-all draw against ten-man Kariobangi Sharks at the Machakos Stadium. Sharks went ahead in the 16th minute through Michael Bodo before Leopards skipper Robinson Kamura restored parity from the spot seven minutes later. Vasiljevic, who arrived in the country over the weekend, was handpicked by his boss Nikola Kavazovic and the youthful coach guided Ingwe to a draw against the on-form Sharks who finished one-man down after the goal scorer was sent off in the dying minutes of the game for accosting Leopards’ Baker Lukooya in a off the ball incident.

The decision by Mt. Kenya United to part ways with coach Melis Medo proved costly as he returned to guide his new side Sofapaka to a 2-1win over his former employers at Machakos Stadium.

Medo clawed his way to Sofapaka with the trio of John Avire, Tom Adwar and Faina Jacobs and it was Avire who began the onslaught against his former employers breaking the deadlock in the 43rd minute with a diving header.

Sofapaka had survived a number of attempts by Mt Kenya but a ferocious run and a cross by overlapping left back Titus Achesa was superbly guided into the back of the net by the diving Avire to take a 1-0 lead into the break. Medo introduced seasoned striker Kepha Aswani for Rwandese Justin Mico after the break, a change which bore fruits in the 54th minute as he won a penalty after Frank Bala obstructed him in the box.

Former Muhoroni Youth defender Amani Kyata slotted the ball past Aimo to rekindle their hopes of scooping at least a point but Sofapaka held on until the end.

Sony Sugar had burly Enoch Agwanda to thank as his 75th minute penalty saw them hold Tusker to a one-all draw at Awendo Stadium. David Juma had given Tusker the lead in the first half. Zoo Kericho lost 1-0 at home to Nzoia Sugar.