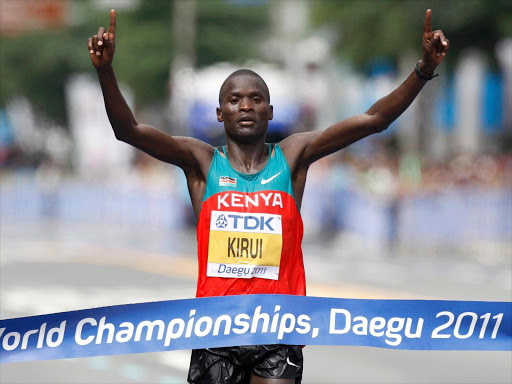 Two-time world marathon champion Abel Kirui is hoping to return to winning ways when he lines up for the Chicago Marathon next month.

The race, which is part of the World Marathon Major series will be staged on October 9. Kirui, who missed out on the just concluded Olympics Games, has already kick off his campaign for the London World Championships next year. “My intention is to represent Kenya in the next World Championships hence my early preparation in search of the best performance,” said Kirui who trains in Iten.

“I am thirsty for the third title at the World Championships,” he added. Kirui won the 2009 (Berlin) and 2011 (Daegu) marathon titles before settling for a silver at the 2012 London Marathon.

After being locked out of the season with an injury, he believes he still has what it takes to fly the country’s flag again. “With the injury, I couldn’t do much but I am now okay and ready for the road. I competed last weekend in Tilburg in Netherlands and placed fifth in the 28-miles. I think I am back on track and hope for good tidings going forward,” he explained.

“I ran about 2.57 minutes per kilometre and it was very impressive,” he added. His target is to run under 2:05 in Chicago in a bid to compete for slots in the Team Kenya to the World Championships in London. His 2:05.04 he clocked when he finished third at the 2009 Rotterdam Marathon ranked him as the sixth fastest marathoner ever.