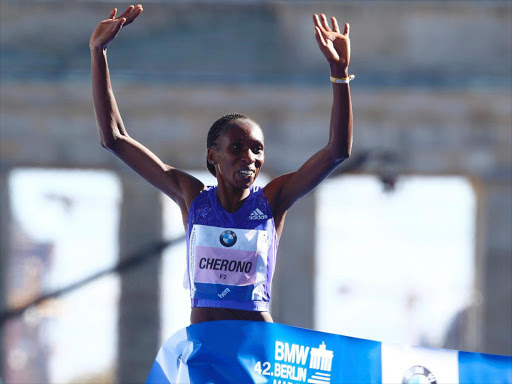 Berlin Marathon champion Gladys Cherono has expressed her disappointment after withdrawing from the 2016 London Marathon, where she was expected to make her debut, following a nagging injury.

Cherono, the quickest marathon in the world last year when she won in Berlin in 2:19:25, was one of the favourites for this year’s race on 24 April.

It is the second time Cherono is withdrawing from a major race after opting out of her World Half Marathon championships’ title defence last month.

“It is unfortunate that I will not be running in London, where I was set to make a debut,” said Cherono. “I have no words to describe how I feel. It’s terrible. I had prepared very well psychologically but I developed a hip injury that made me even discontinue my training.”

“It is too painful and I just want to concentrate on the healing process before making any other plans.”

However, Cherono remained optimistic of making a recovery in the quickest time possible.

Keitany, the second fastest woman of all time, is seeking a third London Marathon victory and revenge over Ethiopia’s Tigist Tufa, who beat her to the title 12 months ago.

Tufa will defend her crown alongside fellow Ethiopians Aselefech Mergia, the 2010 London champion, Mare Dibaba, who won the World Championship gold medal in Beijing last summer, and former Paris Marathon champion Feyse Tadese. It is double blow for Kenyans after the 2011 Boston Marathon champion Geoffrey Mutai withdrew from this year’s edition after failing to meet his training goals.

Mutai, 34, was slated to make his first return to the Boston Marathon since winning in a course record of 2:03:02. The time was the fastest marathon in history at the time. World records do not count on the Boston Marathon course due to its point-to-point setup with a net elevation loss that exceeds the IAAF’s limits for records.

The 2015 champion Eliud Kipchoge and 2014 winner Wilson Kipsang are still in the race for the men’s top honours in London.

Kipchoge beat two-time champion Kipsang by just five seconds in a thrilling sprint finish at the end of last year’s race, with world record holder Dennis Kimetto left to fight for third place. Kipchoge’s winning time of 2:04:42 was a fraction outside Kipsang’s course record, and the former world 5000m champion went on to win the BMW Berlin Marathon last September in a personal best of 2:04:00 and currently leads the World Marathon Majors rankings. He now sits sixth on the all-time list behind Kimetto’s historic best of 2:02:57 and Kipsang’s former world record of 2:03:23.

Kimetto returns to London in 2016 hoping to improve on his third place last year and Stanley Biwott is the fourth outstanding Kenyan in the field and will be running in London for the fourth time after finishing fourth last year. He was second in 2014 and eighth in 2013. Biwott should be full of confidence after an impressive victory at the 2015 TCS New York City Marathon.