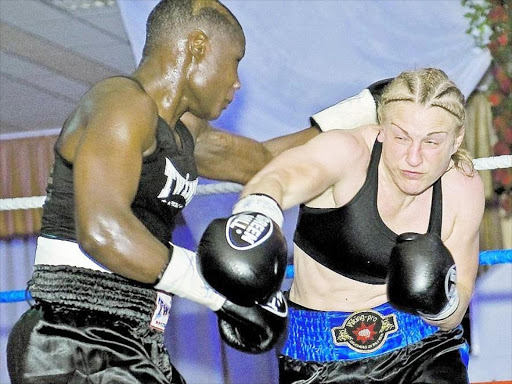 Conjestina Achieng fights with with Maria Lindberg of Malmo, Sweden to a 10-round draw for the vacant WIBF Middleweight title on May 8, 2009 at the Royal Event Center in Berlin, Germany.

Several boxers of yore including legendary Steve Muema and David ‘Harish’ Ouma just to name but a few have died in abject poverty after years of distinguished service to the nation.

Some who represented the country in the early years including Nakuru-based Philip Waruinge (1972 Munich Olympics silver medallist) and Steve Muchoki (former AIBA World Champion) continue to languish in misery despite dominating the sport at global level in the 1970s. Their sorry state of affairs, as boxing experts would put it, was attributed to lifestyle and lack of financial advice.

Former women’s world boxing champion Conjestina Achieng’ who was once a semi-god on the local sporting arena had her situation come from bad to worse this season much to the chagrin of boxing lovers. Her plight overshadowed what was truly a less colourful 2015 season, where Rio Olympic slots proved elusive.

Like his predecessors, ‘Conje’ or ‘Hands of Stone’ as she is fondly referred to in boxing circles, has continued to languish in poverty and obscurity for the past few years. She last fought in February, 2010 when she stretched her ring record to 17-6-4 upon handing Angel McKenzie a unanimous decision blow.

Her former Nairobi promoter, who spoke on condition of anonymity, talked of the huge perks she pocketed as fight purse at the peak of her career but regrets that lack of financial advise did her in. The Promoter goes on to explain that the Siaya boxing queen earned Sh1.7million in her two loses to the crack Russian Natasha Rogosina in Germany in 2008.

“She pocketed about Sh600,000 when she defeated Argentine Guilamina Fernanzez plus many other purses she got in international contests,” recalls the Promoter. According to some reports, the once ferocious and most feared African female boxer developed mental illness which has since distracted her boxing career hence her admission to Mathari Mental Hospital. Conje was later discharged prior to relocating to her village in Siaya. Sources close to the boxer reveal she has been reduced to a pauper who drinks cheap liquor all day to try and forget her glory days.

Conje was in town recently as a guest of Nairobi County Government and denied in a press conference that she was mentally sick. Conje staunchly admitted at City Hall in a function presided over by County Speaker Alex Ole Magelo that she is not mentally sick but just undergoing depression.

There was equally not much to celebrate on the local scene. At the All Africa Games in Congo, Brazzaville, Kenyan boxers could only manage two bronze medals—thanks to Nick Okoth of Kenya Defence Forces and his Police heavyweight counterpart Elly Ajowi for contributing to Kenya’s medal haul.

Okoth, who is a Beijing Olympian and Ajowi lost their semi-final bouts at the Talangai Hall in Brazaville to settle for bronze.

Okoth lost the lightweight semi on points to Algerian Reda Bendaziz while Ajowi, who is a national team mainstay, crashed to a third round technical knockout (TKO) at the hands of Efe Tobor Apochi of Nigeria.

Although much was expected from the Kenya trio (currently fighting in AIBA Pro Boxing ranks), only disappointments were harvested.

After failing to secure early slots for 2016 Rio Olympics, the Kenyan APB trio which comprises of Nickson Abaka, Benson Gicharu and Rayton Okwiri were cleared by AIBA to participate in the Brazaville Games which were non qualifiers for the Olympics. Usually, AIBA permits APB boxers to represent their respective country only in Olympic related events. Ajowi began his campaign by defeating Kevin Kilendo of Seychelles 3-0.

Ajowi went on to vanquish Arnold Akani Phuzi of South Africa 2-1 to book a semis ticket before suffering a third round technical knock out to Apochi and indeed collecting bronze from the games.

Gicharu sailed through to the quarter-finals on unanimous points decision against Gabon’s Mombey but was handed 3-0 blow by Algerian Khalil Litim. Welterweight Rayton Okwiri, a bronze medallist at the 2011 edition, kick started his campaign with a 3-0 victory over Mohamed Hikal II of Egypt but lost to 1-2 to Nigerian Oluwafemi Oyeleye.

In a bid to salvage Kenya’s early chances, AIBA handed Okwiri a wild card to Doha but the lengthy government procurement process meant he would not honour the invite.

Later, Boxing Association of Kenya (BAK) chairman John Kameta slammed the government for frustrating Okwiri’s travel. But in a quick rejoinder, Commissioner for Sports Gordon Oluoch blamed BAK for not being proactive.

On home competitions, Kenya Police “Chafua Chafua” recaptured the National League title from Kenya Defence Forces, who had won it in 2015.

Kenya’s APB star Okwiri was one of the most successful boxers competing in Brazzaville, and advanced to the Welterweight quarter-finals with an impressive victory over Egypt’s Mohamed Hamdi Abdelmawgoud Hikal.

The 29-year-old Kenyan used his strength and power to considerable acclaim, while the young Egyptian also found success with his tricky style.