The National Police Service Act 2011 sets out the rules and procedures on use of force and firearms by police officers.

• This week, the Independent Policing Oversight Authority announced it had concluded its investigations into a shooting that took place in March 2017.

• According to one of the people interviewed by the BBC, Rashid “kills criminals and he does not take bribes" 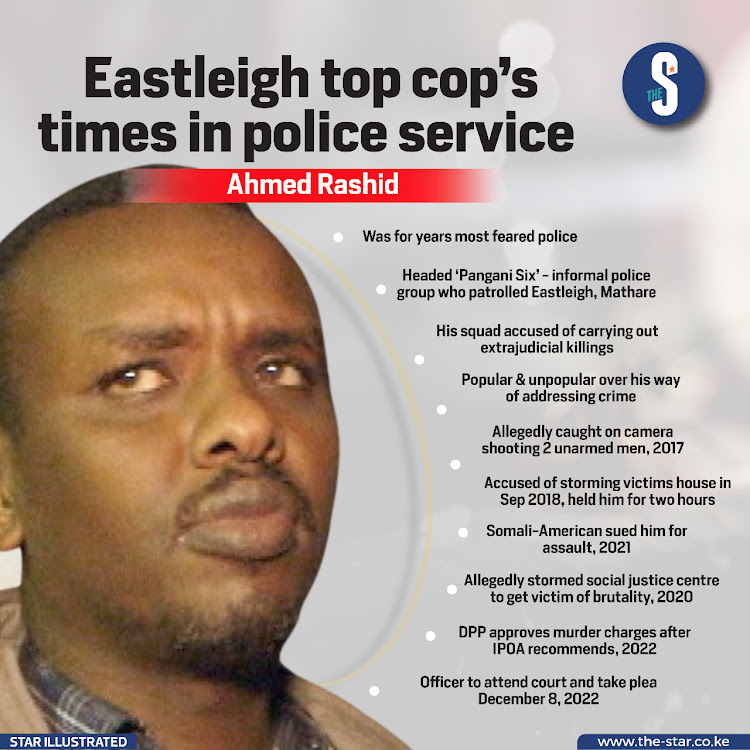 One of my favorite film dialogue scenes comes from A Few Good Men, starring Jack Nicholson as Colonel Jessup.

In the movie, he is accused of having issued a Code Red Order: A military euphemism for a violent extrajudicial punishment that results in the death of a soldier. Having admitted to issuing the order, he defends himself as follows:

“Son, we live in a world that has walls, and those walls have to be guarded by men with guns. Who's gonna do it? You? …….We use words like honor, code, loyalty. We use these words as the backbone of a life spent defending something. …. I have neither the time nor the inclination to explain myself to a man who rises and sleeps under the blanket of the very freedom that I provide, and then questions the manner in which I provide it!”

This week, the Independent Policing Oversight Authority announced it had concluded its investigations into a shooting that took place in March 2017. In a video that went viral, a man in a maroon t-shirt is seen tussling with a man whom he proceeds to shoot several times.

A large crowd has gathered and witnesses the entire incident. Photos taken at the scene showed there were two victims. According to IPOA, these were Jamal Mohamed and Mohamed Kheri and the shooter was police Corporal Ahmed Rashid, who will now be charged with the murder of the two.

A BBC Africa Eye documentary in 2018 followed Rashid as he carried out his job of “flushing out gangsters.” It is a telling documentary that exposes the rudimentary approach that our police have towards investigating crime. It shows a young man being arrested and apparently charged with possession of cannabis. How did the police reach that conclusion? By sniffing his fingers, which apparently had a smell of cannabis.

While they search him in the full glare of the cameras, no cannabis is found on him or at least we are shown none. Yet in that same documentary, residents of Eastleigh praise Rashid, whom they hail as a hero because he has not spared the criminals.

According to one of the people interviewed, Rashid “kills criminals and he does not take bribes.”

The news of his indictment came against the backdrop of at least perceptions of heightened criminal activity in Nairobi, especially. Kenyans took to social media, which has become the megaphone for the public to a government that does not always hear the cry of its people, to decry the state of affairs. In response, the National Police Service issued a statement identifying various crime hotspots in Nairobi and advised residents to be home before it got dark.

On social media, users of public transport have shared their stories of how gangsters have posed as fellow passengers to rob them of their valuables. In the Rift Valley and northern part of Kenya, banditry has led to the death of scores of Kenyans and the destruction of property. So brazen are the bandits that when Interior Cabinet Secretary Kindiki Kithure was conducting a meeting in Kitui county, it was interrupted by the sound of gunshots.

Huge disparities between the haves and have-nots, coupled with tough living conditions for a majority of the population, make crime an attractive venture for some.

This week, a law student at one of the local universities was stabbed to death by thugs who wanted her phone.

In Kiambu, 24-year-old Keagan Githua was stabbed to death by thugs on motorbikes while walking home from church on October 30.

On November 9, police arrested a 15-year-old boy who was armed with a knife and was accused of robbing pedestrians along the Southern bypass. On November 21, Kasarani police arrested a man who had 275 stolen phones, including 265 iPhones in his house. The perpetrators of these crimes use all sorts of weapons, including guns and those who resist are met with brute force sometimes ending up in death.

With such stories circulating, it is easy to see why many people tout someone such as Rashid as a hero, and there are calls for retribution. Rashid represents that retribution for many people who are unable to take the law into their hands.

But can we trust a system that puts the police as prosecutor, witnesses, judge, and executioner? Can we submit ourselves to the police and hope they will always act in our best interests?

Like Col. Jessup in the movie, those who use extra judicial means will always hold up the effectiveness of their methods as a shield against criticism. The argument is that the ends justify the means.

While some may sleep better at night believing the police are dealing with criminals, how do we find any sleep knowing that there is the possibility that an innocent person may have been killed? Are they just collateral damage in the pursuit of a good night's sleep for us? We can never truly be certain that the criminal is a criminal, absent due process.

The Constitution has a very different vision of the police and justice system from that held by the police themselves. Kenyan law does not place the determination of a person’s guilt within the National Police Service. Our democracy is built on the foundation of the rules of natural justice and the rule of law. Our Constitution insists that every person has the right to defend themselves when accused.

Prosecution is a preserve of the Director of Public Prosecutions under Article 157. Judicial authority can only be exercised by the Courts and Tribunals established under the Constitution. Article 238(2) states that national security must be promoted and guaranteed in accordance with the principle of compliance with the law and with the utmost respect for the rule of law, democracy, human rights and fundamental freedoms.

The police specifically must comply with constitutional standards of human rights (Article 244(c)) which include every person’s right to life, while Article 26 (3) provides that A person shall not be deprived of life intentionally, except to the extent authorised by this Constitution or other written law.

The Supreme Court has held that, even for murder, the death penalty is not automatic. And in reality no-one convicted of a crime has been executed since 1987 – except, ironically, by the police without any trial, still less conviction.

The National Police Service Act 2011 sets out the rules and procedures on use of force and firearms by police officers. Firearms may only be employed as a last resort and in limited circumstances – to prevent loss of life, or serious injury or to protect property (and many think this last goes too far). The Constitution does not clothe the police with any power of retaliation.

The court will have to decide the Rashid case on the basis of the evidence brought before it, and the Constitution and the law. What members of the public have seen from that video shows two alleged criminals handcuffed. One was shot over five times, while he lay there. He could not run and was not armed. The officer was under no imminent threat from the two alleged thugs. The father of the other victim admitted that his son was a petty criminal, but adds that he did not deserve to die as he did.

The wheels of justice may grind slowly but the solution is not to throw away the entire justice automobile in favour of quicker and instant justice by the police. Rather, we should work to perfect it by pursuing faster and more thorough investigations, faster resolution of cases in court, and promoting the independence of institutions in the criminal justice network.

Rashid is set to take plea to the charge of murder on December 8 (though he is trying to get the courts to stop the case).

James WaNjeri is an Advocate of the High Court. He can be reached on [email protected]

Lobbyists want Rashid to have his day in court

Irungu says Rashid should wait to appear in court on December 8 to defend himself.
News
2 months ago

IPOA obtained summons against Rashid to attend court on December 8.
News
2 months ago
Post a comment
WATCH: The latest videos from the Star
by JAMES WANJERI
Siasa
03 December 2022 - 04:56
Read The E-Paper