While Somalia has stabilized politically, it faces the terror threat from al Shabaab, while Tigray war is ongoing

• AU Commission deputy chairperson Amb Erustus Mwencha said without security, there is no peace and without peace there is no development. 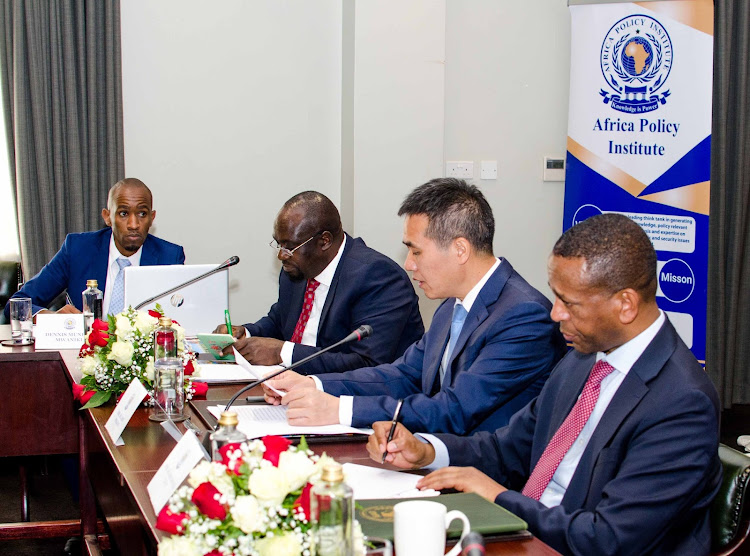 Executive director of China-Africa Center at Africa Policy Institute Munene Mwaniki, API chief executive Peter Kagwanja, China Ambassador to Kenya Zhou Pingijian and IGAD Special Envoy for the Red Sea, Gulf of Aden and Somalia Mohamed Ali Guyo during a seminar on the peace and stability of the Horn of Africa on ThursdayOctober 13, 2022
Image: ELIUD KIBII

Sustainable development will be impossible if there is no peace in the Horn of Africa, regional experts have warned.

Speaking during the Outlook on Peace and Development in the Horn of Africa seminar in Nairobi, the experts and analysts said development is pegged on the state of peace and stability in the region.

The seminar held on Thursday was organised by the Africa Policy Institute, a pan-African policy think-tankl, and the Embassy of China.

It sought to initiate in-depth discussion on China’s outlook on peace and development in the Horn of Africa.

The panelists and participants were drawn from the government, embassy of China, academia, think tanks, media and regional organisations.

In his address, former AU Commission deputy chairperson and African Capacity Building Foundation Executive Board chairman Ambassador Erastus Mwencha said without security, there can be no peace and without peace, there is no development.

“You cannot talk about development if you don't address the challenges of security and governance. China has been at the forefront in supporting African countries for development. This will only come if there is peace and cooperation,” Ambassador Mwencha said.

Mwencha said during the wake of Covid-19 pandemic, China moved the concept of peaceful development to a “whole new level”.

President Xi proposed the GDI at the UN General Assembly last year, seeking to build a global community of development.

According to China’s Foreign Affairs ministry, the GDI puts development first and the people at the centre, and seeks to expedite the implementation of the 2030 Agenda.

Mwencha, however, noted that interventions in the conflicts have fallen short of expectations.

While Somalia has stabilized politically, it still faces the terror threat from al Shabaab, while Ethiopia is suffering a war in Tigray and negotiations are yet to start, while the situation in South Sudan and the Sudan is still precarious.

"Development in the Horn of Africa has been held hostage by spiraling terrorism and conflict. And the definition of the region must be expanded to cover all areas sharing common challenges such as terrorism, insurgency and conflict," Kagwanja said. 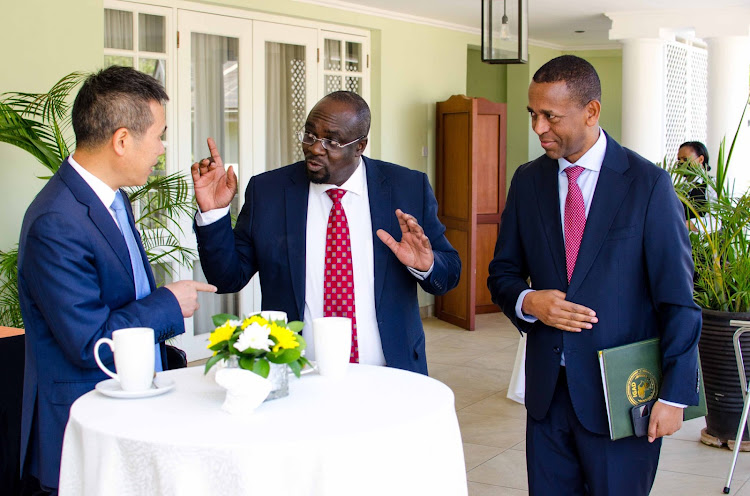 China Ambassador to Kenya Zhou Pingijian, API chief executive Peter Kagwanja, and IGAD Special Envoy for the Red Sea, Gulf of Aden and Somalia Mohamed Ali Guyo during a seminar on the peace and stability of the Horn of Africa on Thursday October 13, 2022
Image: ELIUD KIBII

On his part, Igad special envoy for the Red Sea. Gulf of Aden and Somalia Ambassador Mohamed Ali Guyo termed the Horn of Africa as a region that has seen revolutionary at every historical juncture.

Ambassador Guyo added that the only option available is to prioritise development rehabilitation in the region.

“Peace and investment is an important aspect that brings sustainable development through trade, economic development that will foster growth in the Horn of Africa,” Guyo said.

He, however, explained different approaches to security among Horn of Africa countries could be resulting in different results, especially in the war on terrorism.

However, Ambassador Zhou said, hotspot issues have intensified in recent years, sometimes erupting into conflicts and confrontations, “which are totally against the interests of the people of the countries in the Horn of Africa, and should not continue any longer”.

The envoy said China is committed to promoting peace, stability and development in the region.

He noted that 80 per cent of China’s military peacekeepers and 75 per cent of its contributions to peacekeeping assessment are deployed in Africa.

“China’s naval fleet has escorted nearly 7,000 Chinese and foreign vessels through the troubled waters off Somalia,” the Ambassador said.

China has in recent years increasingly demonstrated its interest in peace and stability in Africa, particularly the Horn of Africa.

During his visit to Kenya in January this year, China Foreign Affairs Minister Wang Yi proposed the Outlook of Peace and Development in the region, which is aimed at supporting regional countries in addressing security, development and governance.

This in an attempt to achieve lasting peace and security as well as development and prosperity.

Minister Wang’s regional visit was followed by that of Special Envoy for the Horn of Africa Xue Bing, who was appointed in February.

During the visit, Ambassador Xue said Horn of Africa countries are fed up with western countries' interference.

“Some countries in this area [the Horn of Africa] are fed up with the foreign intervention, the preaching from Western countries. They say China respects us, treats us as equals and so they want to see China playing more active and constructive role,” the envoy said.

He also announced that China would facilitate the first peace conference in the first half of the year.

In June, the first China-Horn of Africa Peace, Good Governance and Development conference was held in Addis Ababa.

More than 18 million people are food insecure due to drought, and more than seven million children face acute malnutrition
News
4 months ago

Xue Bing says the Horn of Africa has suffered from external interventions from western countries for long.
News
8 months ago

Sudan, South Sudan, Ethiopia and Somalia are having political and security problems, which have destabilised the Horn of Africa
Siasa
9 months ago

There is already military infighting in Ethiopia between the federal forces and TPLF, tension in South Sudan and Somalia
News
1 year ago
Post a comment
WATCH: The latest videos from the Star
by ELIUD KIBII Subeditor and writer
Siasa
20 October 2022 - 21:00
Read The E-Paper