The evidence of the drought impact is visible and audible

• Customary climate forecasting systems of communities themselves can be aligned to formal early warning systems.

•  We can build on the current drought bulletin compiled by the National Drought Management Authority that provides the status of climate and food security. 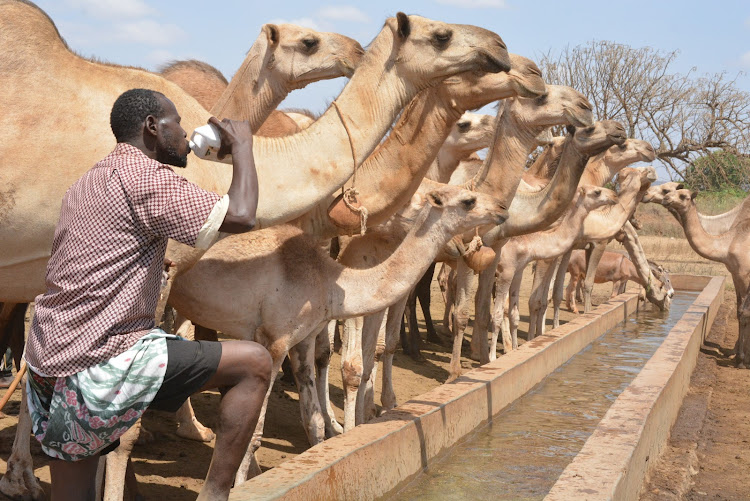 DROUGHT: A herder and his camels drink water in Moyale, Marsabit county, which has been stricken by drought
Image: GEORGE MURAGE

The regional spread of drought has lately dominated the news, with media images of skeletal figures in the drought stricken Northern Kenya.

In the recently released report by the UN, more than 15 million people are already facing high levels of acute food insecurity and severe water shortages across Ethiopia, Kenya and Somalia.

Drought dominates the global scene too, with heightened risks of human loss. According to the UN Convention to Combat Desertification, approximately 650,000 drought-related deaths occurred globally, between 1970-2019, with more than 90 percent of these deaths registered in developing countries. These stark realities have placed a section of pastoralist groups in a situation of compounding and cascading risks.

In Kenya, we are already facing the reality of the rains failing for a fourth consecutive season, thereby exposing us to protracted drought never experienced in the last four decades.

The evidence of the drought impact is visible and audible. Kenya is just behind Ethiopia and Somalia as third worst-affected country in the region, with about 3.5 million people already in dire need of immediate food assistance.

The familiar script of typical droughts of 1980s and 90s see drylands as a region where hunger and environmental devastation is commonplace, and this view largely shaped the outsider’s perspective of drought responses in Kenya.

The current drought is part of the larger climatically induced cyclical changes and has devastating consequences, especially on rebuilding of herds and flocks. Kenya recorded fifteen droughts between 1960 and 2016, with 40 per cent of the droughts occurring after 2000, an indication that droughts are considerably shifting in frequency and severity.

These sobering and tragic statistics of droughts and its impacts call for a serious commitment on the part of policymakers to take stock of the barriers to access food and other essentials that permeate all levels of our society.

No one really knows with certainty the pattern of next drought, but the frequency and severity of droughts has certainly added renewed urgency to the concerns about the cost of ex post crisis management.

According to recently released report “Dangerous Delay 2: The Cost of Inaction” by Save the Children, Oxfam and the Jameel Observatory, the warnings came early enough and the existing systems are considered to be capable of preventing crises. However,  they are not sufficiently resourced or adequately supported by decision makers to act on the early warnings. Even in the current drought, although there were clear indications and warnings, the response of governments has been disappointingly tepid, especially for a country like Kenya that is reeling from the onslaught of multiple droughts.

Taking the necessary pre-emptive actions would help government avoid costly lifesaving emergency interventions. Studies have proved the dividend of early action. The investments in preparedness save both cost and time, with numbers showing an average of over $2 saved in humanitarian cost for every $1 spent on early action.

To date, our existing government support and humanitarian aid is not fully designed and resourced to respond to cyclical and predictable shocks at such scale. So, if we fail to achieve consensus on early action, the next drought outbreak could see us repeat the same costly mistakes all over again.

The solutions are complex and sometimes contradictory. A key priority is to improve the diagnosis and prediction tools that help us visualize risks and act early.

However, for this to happen, we need to fix the disconnect between the local community decision making and the formal response to drought. This requires localized data to improve triggers and subsequent anticipatory actions.

Experience has shown customary climate forecasting systems of communities themselves can be aligned to formal early warning systems. We can build on the current drought bulletin compiled by the National Drought Management Authority which now only provides the status of climate and food security.

If we complement the bulletin with data on climate forecasts to trigger early action, we increase the chance that any negative changes are flagged early enough and timely response are taken.

The second area is to align funding for drought thresholds and the associated priorities. We need to resolve the current gaps between plans and funding.

One workable idea is fast-tracking delivery of pool funds that could disburse sufficient resources based on agreed thresholds. Such flexible funding will also help in execution of “shelf projects” that are currently not well matched with financial resources. Such funds should be simplified to allow for rapid dispersal.

Finally, we need to coordinate a diverse set of groups in the crowded drought response space by systematically linking climate, development, government, and conflict response activities through expansion of existing shock-responsive social protection systems such as cash transfers and other innovative risk finance.

This will prevent loss of livelihoods and welfare and help to take away forever the apocalyptic scenes of drought in northern Kenya.

Dr. Guyo Malicha is an expert on African pastoralism and head of the Jameel Observatory

Delayed rains across many parts of the country have led to crop failure, drought and widespread food shortage.
Opinion
1 month ago

Kobia urged others in the international community to join in and rapidly scale up assistance.
News
2 months ago

More than 18 million people are food insecure due to drought, and more than seven million children face acute malnutrition
News
2 months ago

Denmark Minister of Food and Agriculture speaks about bilateral collaboration in agriculture and food security
Siasa
6 months ago
Post a comment
WATCH: The latest videos from the Star
by GUYO MALICHA
Siasa
21 August 2022 - 16:31
Read The E-Paper