The Constitution, Schedule Four, lists the functions of counties

• The Supreme Court delivered its judgment in a case on the constitutionality of Constituency Development Funds. It focused on the CDF Act of 2013.

• In brief, the court held that the 2013 Act was unconstitutional. 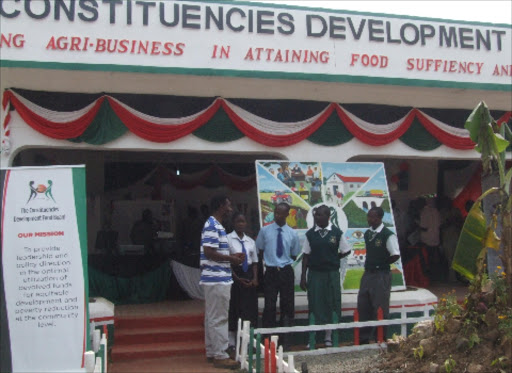 CDF CASE: First introduced in Parliament in 2003 by the then MP for Kinangop Karue Muriuki, the CDF was widely lauded as one of the most brilliant and noble concepts ever conceived in Kenya
Image: FILE

In these columns, one purpose is to help readers understand court decisions. This may help them understand the Constitution itself.

This week, the Supreme Court delivered its judgment in a case on the constitutionality of Constituency Development Funds. It focused on the CDF Act of 2013.

For most Kenyans, what other countries think of Kenyan court judgments is probably unimportant. But maybe there would be some pride in the fact that an Indian commentator described this judgment as “a landmark judicial contribution” to the “global conversation” about the principle of separation of powers.

In brief, the court held that the 2013 Act was unconstitutional. We cannot look at all its reasoning here.

One interesting aspect of the judgment is the court’s reliance on values in what they described as our “value-based Constitution”.

The other provisions in the Constitution are intended to fulfil those values. They stressed particularly good governance and accountability. This is an important point for readers of the Constitution – it is not divided into bits about values and bits about machinery of government. All aspects must be judged against the values (found particularly but not only in Article 10).

Many of the points on devolution have been made in other cases, even in the same court. But their repetition and specific application amount to a strong and valuable support for that important aspect of the Constitution.

The main constitutional role of the Senate is to protect the interests of the counties and their governments. There have been several cases on the Senate’s role in making law about counties. The Court stressed that the Constitution gives to the two Houses of Parliament and their speakers the duty and responsibility to decide whether a particular matter concerns counties. However, these bodies do not have the last word. So a court may decide that the Senate must be involved in making a particular law even if the Senate did not insist on it.

A very important part of the case was about whether the 2013 Act was trying to deal with matters that should be county responsibilities. The court held it did, and was thus unconstitutional.

The Constitution, Schedule Four, lists the functions of counties.

The court commented that county governments are allocated “most of the functions and powers that can be said to be ‘community’ or ‘local’ in orientation”. Interestingly, it spoke of the principle of “subsidiarity” - a word used in the Constitution.

This is that “the broad presumption that sub-national governments ought to be assigned those functions and powers which vitally affect the life of the inhabitants”. This of course cannot be applied if it conflicts with the Constitution- so primary schools are clearly a national matter however much you might think they ought to be local.

Distribution of national resources between national and local levels was a key issue. On this, the court brought out a rather neglected constitutional provision — “public money should be used in a prudent and responsible way”.

The court said this means that assignment of tasks between the levels of government must be very clear to avoid “duplication in the deployment of resources.” Yet the 2013 Act muddies this particular water.

Some will be disappointed that the court rejected the idea that the Constitution set up a “federal” system, preferring, as courts before it have done, to use the word “unitary”. My personal view is that it is unfortunate to put such stress on labels.

The task is to identify the vision of the Constitution and use that to interpret unclear provisions, not to move a step away from that sort of interpretation by using labels invented elsewhere. In fact several countries that are usually described as federal do not use that word in, for example, their constitutions. India is an example. Let academics argue about this, not courts.

ROLE OF MPS AND CONSTITUENCIES

This is another glaring issue about the whole idea of CDFs.

Some parties argued that the CDF was not really much to do with MPs so created no problem. But the court said when it examined the law, it was clear that the constituency MP really controlled the local CDF Committee, influenced the selection of projects, and monitored their implementation.

The success or failure of the Fund is linked in people’s minds to the MP. It will affect the MP’s chance of re-election. This creates a conflict of interest that risks leading MPs not to undertake “the robust oversight mandate- envisaged by the Constitution.”

MPs have three roles under the Constitution — representation, legislation, and oversight over the national government.

“There is no service delivery mandate envisaged in these roles”. That is the job of the national Executive. When the same person carries out a function and supervises a function and has a supervisory role over it, anyone would feel that the supervision might not being rigorous.

The court took a strong line. Giving legislators any role at all, “even a merely ceremonial role” in any responsibility of the national or country executive would “promote conflict of interest and compromise their oversight role.”

Another nail in the coffin of the whole CDF idea was the court’s observation that under the Constitution, the constituency was there for representation. Constituencies are about how voters are grouped to elect MPs, and are not designed as service delivery units.

In essence, the court is saying the role of MPs has been misconceived – at least by those MPs. Unfortunately the public also share this misconception. It is perhaps easier to understand the CDF than what the MP may or may not do in committee rooms in Parliament. How do we educate the public about MPs true role?

This question of what MPs can do is a separation of powers issue. The Constitution uses this expression only in connection with the system of county government. But like other courts, the Supreme Court held that this idea is built into the core of the Constitution particularly by Article 1(3) that says the people’s sovereign power is distributed between legislative bodies (Parliament and CAs), Executive agencies, and the Judiciary and independent institutions. It accepts that different countries have different degrees of separation of powers.

But it relates the importance of separation of powers here to Kenya’s history of “excesses of absolute power vested in the Executive branch which operated with abandon and riding roughshod over other state institutions”.

Whether this principle is violated depends on two questions.

First whether the mandate and powers of one state body unjustifiably strays into the core functions of another branch of government; and second, whether this threatens the realisation of the national values and principles.

For MPs to have the sort of function they have under the CDF Act did unjustifiably take them into the role of the executive, and did threaten the national values.

The judgment makes it very hard for any CDF scheme to be constitutional under the current Constitution. It must be a logical implication that the Ward Development Funds are also unconstitutional – because MCAs like MPs are to represent their electorate, make laws and supervise the county government not to carry out projects. Indeed the Constitution says that a county assembly may “receive and approve plans and policies for …the development and management of [the county’s] infrastructure and institutions.” Not carry out development.

I must end with an apology – to readers and the Judiciary – for an error in last week’s column. There is in fact a set of criteria for appointment of judges, in a schedule to the Judicial Service Act. It is rather good. It may have helped avoid some of the controversies about judicial interviews experienced elsewhere. It mentions fairness, including “open-mindedness and capacity to decide issues according to the law, even when the law conflicts with personal views”.

This remains very difficult to assess, and I remain doubtful about the appropriateness of asking candidates their personal view on matters such as abortion and gay people.

They say it offends constitutional principles on the division of revenue, public finance and separation of powers
News
1 month ago