LIFE AND TIMES OF KIBAKI

• Whilst it may be contestable whether Kenya is an island of peace anymore, it is not in doubt that Kibaki’s Kenya is reinforced our sovereign influence in the region

• The Kibaki government revived the Constitutional Review process that had been cancelled previously. 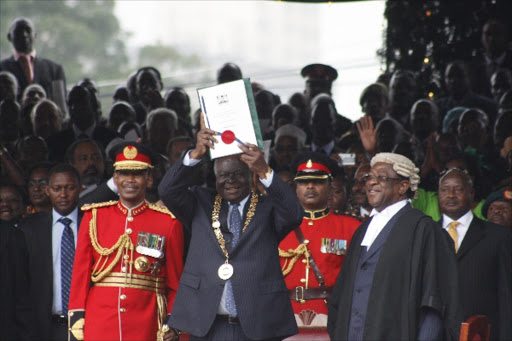 Then President Mwai Kibaki displays a copy of the Constitution during its promulgation at Uhuru Park on August 27, 2010.
Image: FILE

The commitment by the Kibaki government to provide free and compulsory primary education will forever remain the most precious gift to a generation that would otherwise have seen millions miss out on basic literacy.

The initiative expanded enrollment in 2003 to above the natural population growth.

In addition, this definite revolution was extended to tertiary education. Yes, lets argue about standards and all, but when all our kids are inside a classroom. Not some in, some out.

Add to this the disentangling of public universities from the omnipotence of state, thus installing autonomous that guaranteed academic freedoms. Students and academic staff unions no longer outlawed.

2. Liberated the private sector to compete on value.

The Kibaki government’s new economic system allowed all Kenyans to begin thinking for themselves, work and earn a living fair and square.

Kenya’s resurgent private sector, right from the commanding heights of the economy right across to community enterprises and co-operatives, were symptomatic of the change in government’s role from one of a predatory bureaucracy to that of an enabling catalyst.

Yes, corruption remains an unbeaten dragon but there’s no doubt in anybody’s mind that the ultimate success of an enterprise under Kibaki was determined not by proximity to State House but by proximity to a customer’s heart.

3. Pride and honour of indigenous Kenyans

For decades before Kibaki helm, Kenya was the poster-child of the global multilateral financial institutions and their affiliates.

We treated their agents with deference and supplication that they literally became local celebs, who occupied acres of media space as they cajoled, harangued, hollered, wheedled and coaxed Kenya to behave or else...

Part of it helped, as it piled pressure for reform that accelerated the drive for Kenya’s democratic reform. Enter the Kibaki administration and by simply providing reenergized civil service with the space to imagine solutions to our socio-economic needs, both planned and spontaneous initiatives sprouted all over. It obviated the need for the ‘poverty- reduction-strategy-paper’ models of Bretonwoods mandarins.

Yes, we can argue whether all programmes have worked and their levels of integrity, but majority of Kenyans, including some in government, no longer knew who the World Bank representative in Kenya were, neither do we suffer the debilitating low self-esteem of disowning our problems and imagining we needed a saviour outside ourselves to solve them.

The grand reconstruction of roads was a marvel celebrated. Airports had swanky new upgrades, while others were scheduled for modernization.

Liberalization of telecoms spawned a vibrant mobiletelecoms revolution that dazzled the world with breathtaking innovation. Water delivery systems were devolved to local accountabilities.

Younger Kenyans may not have heard of an animal we used to call a ‘cowboy contractor’, so-called because they must have been tarmacking roads using cowdung, judging by the speed with which the roads they built were washed away.

The only regret we may host is that corruption remains our curse. Once we trash graft, Kibaki legacy will reroute to resounding triumph.

5. Leadership with Restraint and Modesty

The leadership personality that President Kibaki brought to the position brought new standards and redefinition of leadership character.

His gentlemanly mien and modesty, commonly interpreted as ‘hands-off’ leadership re-humanized leadership, that the presidency can as well be a normal human job.

The president does have to be an all-knowing, ever-wise, mysterious, shrewd, irritable and volatile genius who has the uncanny ability of giving ‘fatherly advice’ and blood-cuddling threats all in the same sentence. After all, we had tasted it in the past, and we did not like it.

6. Fostered a new value system in the public service

The introduction of performance contracting coupled with the revitalisation of boards of public sector enterprises slowly but surely tilted career mobility in public service towards a trajectory of meritocracy.

Yes, we can argue about the reliability of the performance rating instrument or even the remedial measures we undertake for performance lapses. But one thing is not in doubt: No permanent secretary or parastatal chief imagined they could retain their job under Kibaki by cobbling a choir to sing for the President, or keep gallivanting across the country as ‘presidential entourage’.

Whilst it may be contestable whether Kenya is an island of peace anymore, it is not in doubt that Kibaki’s Kenya  reinforced our sovereign influence in the region, and our neighbors became better for it.

Besides being a model centre of excellence in specialist fields, including private education, healthcare, aviation, medical and agricultural research, telecoms, legal and financial services, Kenya also remains the most hospitable destination for those looking for shoulder to cry on, and those seeking solutions to intractable conflicts.

We had the choice to follow the route taken by ‘advanced democracies’ by setting up detention centers for illegal immigrants. Kibaki refreshed Kenya’s diplomatic means to resolving all governmental conflicts. Despite his eternal resistance to have his name decorated nationally, he submitted to Tanzania’s urge.

A Kibaki road was unveiled, rekindling the brotherhood of founding fathers of pan Africanist spirit .

8. Promulgation and implementation of a progressive new Constitution

The Kibaki government revived the Constitutional Review process that had been cancelled previously.

In addition, the government provided facilitation by way of money and representation all the way up- to promulgation and implementation.

Kenya had a long history of constitutional amendments. The difference this time round is that CoK2010 is pro-people as opposed to the 38 odd amends done by previous regimes that were largely anti-people.

For the reason that we would have placed the blame squarely on the President had the new law not been implemented, we cannot deny him full credit now that it has been done. Let’s merit Kibaki’s settlement by restraining any potential authoritarian gluttony.

9. Thinking of the next generation

The deliberate effort by the Kibaki government to plan for the future as represented by Vision 2030, whose fruition was hedged for way long after his regime lapsed, was a demonstration of selfless and remarkable foresight.

That the government already hit the ground running on the plan’s flagship projects including the Lamu Port Corridor, inter-county highways, railway and airport expansions gave confidence that the vision was no hollow promise.

We may recall that when the Emir of Dubai began transforming the emirate from a sleepy fishing village to a global metropolis in 1962, critics dismissed him as just another profligate prince. Also, when Mahathir Mohammed began the transformation of Malaysia, it was a distant dream to many.

More than at any other time in Kenya’s history, the Kibaki administration shows rare eagerness to deliver on this promise that may deliver, finally, socio-economic and political transformation for Kenya.

I effortlessly liken Kibaki to my all-time genius – Singapore’s Lee Kuan Yew. Many always wonder what Kenya we be today if young Kibaki too reigns of power 1978. Just imagine.

Perhaps the most remarkable asset that the Kibaki administration bequeathed Kenya is the bountiful and flourishing freedom of thought, and general respect for human rights well ahead of the enactment of the new constitution.

Denial of basic freedoms and blatant abuse of human rights had been the one ‘service’ that successive regimes since independence delivered with brutal consistency.

Whilst it is easy to argue that Kenyans fought for every freedom they have, it is also true that good leaders nurture that spirit, while bad ones will always seek to take it away.

We no longer look over our shoulders when we speak, and the decades-long fight to free political prisoners, press freedom, open elections, and other basic freedoms moved on to the fight higher freedoms including access to basic needs as basic human needs.

Enter Kibaki nobody ever again knocked at our doors at night to ask you why we had insulted serikali ya mzee. I served in Kibaki’s Cabinet 2008-13, and not a single day did I fear speaking out my mind on myriad issues, including challenging colleagues in Cabinet particularly over graft or abuse of office. In fact, I believed President Kibaki discreetly encouraged it by “indifference” for he neither reprimanded nor punished one for be honestly robust for public good.

11. This last point could as well be the first!

As the world – from Caribbeans to Pacifica – hailed Mau Mau’s heroic struggle against colonialism, our previous regimes outlawed the dignity of freedom frights.

President Kibaki not only lifted the ban on Mau Mau but also decorated and facilitated recognition and compensation of our veterans. When we see Dedan Kimathi and Tom Mboya’s monuments in the capital city, we see Kibaki’s reincarnation of our beloved heroism. This speaks volumes and his value for virtuous sacrifices for Kenya’s sovereign pride.

For your modesty, tolerance, restraint, brilliance and focus for our beloved motherland Kenya, fare thee well scion of Gallant county of Nyeri.

For being replete with gentlemanly mien and indefatigable vision, Rest In Peace  the best Kenya's President ever.

The writer is former Mukurweini MP and candidate for Nyeri senator

Will you miss Mwai Kibaki?

Will you miss Mwai Kibaki?
Poll of the day
3 weeks ago

Kibaki promised to support me as his successor, says Kalonzo