It goes against campaign to eradicate illegal weapons on the continent.

• AU's Faki warned against incitement to violence in the Horn of Africa country.

•  US Secretary of State asks the government of Ethiopia to halt mobilisation of ethnic militias. 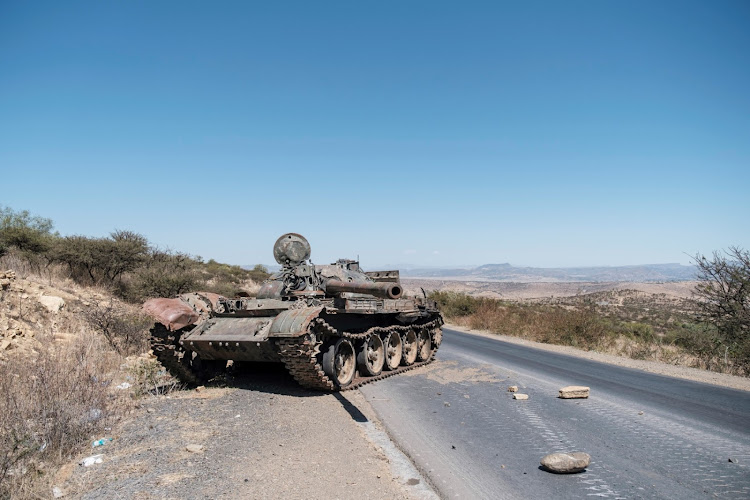 (FILES) In this file photo taken on February 26, 2021 A damaged tank stands on a road north of Mekele, the capital of Tigray.
Image: EDUARDO SOTERAS/AFP

The Department of Political Affairs, Peace and Security of the African Union this week hosted the 12th Annual High-Level Retreat of High Representatives, Special Envoys, and Special Representatives of the chairperson of the commission in Nairobi.

The agenda of the retreat was, among others, promotion of peace, security and stability in Africa under the theme, “Improved Coordination and Harmonization for Impactful Mediation”.

The retreat held between November 1-3 in Hotel Kempinski was structured into six thematic panels, where the panelists shared their perspectives and theme-specific recommendations for promoting impactful AU mediation.

Participants also discussed the monitoring and evaluation mechanism of the AU Master Roadmap of Practical Steps to Silence the Guns in Africa by 2030 and how to curb the illicit inflow and proliferation of arms in Africa as key to silencing the guns.

As this was happening, the conflict in Ethiopia was escalating, with TPLF fighters reportedly advancing towards the capital, Addis Ababa.

Reacting to this, Prime Minister Abiy Ahmed ordered a six-month state of emergency and urged civilians to arm themselves and fight the TPLF.

Abiy said the rebels’ advance was “pushing the country to its demise”. He urged citizens to “organise and march through [any] legal manner with every weapon and power… to prevent, reverse and bury the terrorist TPLF”.

This order has been criticised by, among others, the AU Commissioner Moussa Faki and Kenya’s Foreign Affairs ministry.

Faki warned against incitement to violence in the Horn of Africa country, cautioning parties to the conflict — the federal government of Ethiopia and Tigray People’s Liberation Front — against triggering their supporters  towards acts of reprisal against any community.

The chairperson called on them to refrain from hate speech and incitement to violence and divisiveness.

Kenya’s Foreign Affairs ministry said the fighting must cease and desist immediately, maintaining that a political solution to the conflict must be found.

“Inciting ordinary civilians into the conflict must be shunned to avoid escalation of hostilities and the danger of fragmentation of the country,” the ministry said in a statement.

Kenya National Police Service Spokesman Bruno Shioso said on Wednesday that recent events in Ethiopia “disturb the peace and stability in the neighbouring countries and the Eastern Africa region”.

“The National Police Service has heightened security and vigilance along the Kenyan borders and in other critical areas. Citizens are urged to exercise vigilance  and practice caution around their surroundings,” the statement said.

The call to take arms also triggered the US to respond, with Secretary of State Antony Blinken on Thursday asking the government of Ethiopia to halt its military campaign, including air strikes in population centers in Tigray and mobilisation of ethnic militias.

Abiy’s call for civilians to arm themselves comes at a time the AU is struggling with conflicts, most of them armed. It goes against the AU’s 'Silencing the Guns in Africa' push, which seeks to eradicate illegal weapons on the continent.

With the armed conflict in Tigray and the involvement of Eritrea troops, there is risk of guns crossing borders and ending up in the wrong hands. The Sudan and South Sudan instability offers breeding grounds for proliferation of arms. What happens to the arms after the war?

Citizens of Africa lobby in a letter on the Ethiopian conflict said the war detracts from the AU vision and progress made towards Silencing the Guns in Africa.

“It has the potential of derailing progress on several other socioeconomic and political fronts in Africa. Ethiopia is the seat of the AU and war in Ethiopia affects much more than the host country. We wish to reiterate that no one in Ethiopia stands to benefit from the war,” the letter published by the Mail and Guardian said.

They further said there are many stark lessons from previous wars in Ethiopia and other neighbouring countries about the devastating consequences of armed conflict, not least the physical and psychological wounds on civilians who bear the brunt of war.

South Sudan, for instance, is still struggling with the disarmament and demobilization of civilians and militia 10 years after gaining independence.

Amira Ali, an Ethiopian activist living in the US, on Wednesday raised concern about Abiy’s call for civilians to arm themselves.

“The danger is when leadership does not contemplate the consequence of radical propaganda and arming civilians (young men), and the future post-war with indoctrinated men returning from war,” Ali posted on Facebook.

Edwin Wanyonyi, a war studies researcher, said  Abiy's call is likely to exacerbate the conflict and cause "a lot fragility" in the region.

"We are looking  Central Africa that is in conflict, the Sahel region and now the Horn of Africa spreading all the way to Somalia. So there is going to be a lot of fragility  due to what will become unaccounted arms," he told the Star on the phone on Friday.

Wanyonyi added that in the event of a transitional government, it will be difficult for the DDR [Disarmament, Demobilization and Reintegration ] and integration of militia as is happening in South Sudan, where the war lords end up starting extortion rings.

The researcher further pointed that there is also the risk of localization of conflicts — due to militias and warlords —  as is happening in South Sudan and Libya.

Even with post-conflict reconstruction, evidence shows that over the last eight decades, countries having once suffered from conflict have a tendency to relapse with the “peacetime” becoming gradually smaller between conflicts.

“In post-conflict situations more than in any other, non-state actors such as militias and armed opposition groups with an overabundance of arms and ammunition, pose great risk to internal stability,” a report by the AfDB notes.

The Role of Disarmament, Demobilization and Reintegration Programs in Post-Conflict Reconstruction: Some Lessons Learnt report further says in that post-conflict periods, it is inevitable to call for disarmament, demobilization and reintegration of former combatants, an important component of peace-building that helps prevent the reoccurrence of conflict.

How Iran is using toons to silence guns in Africa

The resolution to silence the guns was made in 2013 by African member states in Addis Ababa, Ethiopia
News
3 months ago
by ELIUD KIBII Subeditor and writer
Siasa
05 November 2021 - 22:00