Kihara is not new to controversy, particularly in relation to the violence of 2007-08

• In a video that has since gone viral, Kihara accuses members of a certain community of not paying rent in Kibera and Mathare since 2007.

• She claims that some members of the community had allocated themselves businesses they would grab in Naivasha, had ODM leader Raila Odinga won in 2007. 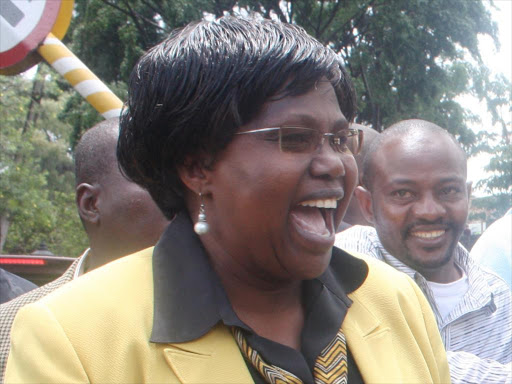 It is said a woman's greatest power is in her words.

Naivasha MP Jayne Njeri Wanjiru Kihara is in trouble over remarks she made last weekend, reawakening the 2007-08 post-election demons.

In a video that has since gone viral, Kihara accuses members of a certain community of not paying rent in Kibera and Mathare since 2007.

The legislator further claims that some members of the community had allocated themselves businesses they would grab in Naivasha, had ODM leader Raila Odinga won the 2007 presidential election.

So that it is understood in context, Kihara was referring to comments by Suna East MP Junet Mohamed, insinuating that if Raila becomes President in 2022, the government will belong to Nyanza region.

Junet has since clarified his remarks in various media outlets.

Regardless, Kihara’s remarks were heavy because Kiambaa itself shares the pain of 2007-08 violence as some of their people who had relocated in Kiambaa in the Rift Valley perished in the clashes

The reaction was fast and furious through social and mainstream media.

Martin Wachira, the managing editor Nairobi Leo, tweeted, “That video by Jane (sic) Kihara is just SAD! We should never PROFILE a community for any reason. Luos are Kenyans and that route she is taking is calamitous. We should never allow politicians who are propagandists in their quest to attain power, turn us against each other”.

Borabu MP Ben Momanyi said he was extremely disappointed with remarks made by Kihara.

“She not only depicts members of a certain community as goons, but also triggers tribal animosity which could plunge Kenya into chaos. I urge DP William Ruto to talk to his troops, ask them to tone down,” Momanyi said.

Dikembe Disembe [Seth Odong] said, “Jayne Kihara should be told the Kikuyu IDPs of Luo Nyanza returned by March 2008. Did Kikuyu IDPs of Kalenjin Rift Valley ever return? No, they stayed in IDP camps for years. Why, because their homes had been taken. And Not by Luos. Also, we pay rent, stop the silliness”.

Victims of the post-election violence in Naivasha on Monday accused Kihara of hate speech and warned that the legislator’s remarks would lead to chaos, noting the violence that rocked the lakeside city in 2007 started through such reckless sentiments.

They asked the National Integration and Cohesion Commission to move with haste and investigate the alleged incitement and hate speech.

ODM coordinator in the area David Kilo said the allegations were in bad faith, as there were no reported cases of any community refusing to pay rent in Naivasha.

But Kihara is not new to controversy, particularly in relation to the violence of 2007-08.

In July 2011, a man who lost his family of nine during the post-election violence in Naivasha accused Kihara of playing a role in the chaos.

Testifying before the Truth, Justice and Reconciliation Commission in Kisumu Bernard Orinda Ndege, 54, said Kihara told a rally near the Naivasha District Hospital that some communities had to leave the area for supporting her rival, John Mututho.

“She called a gathering near the hospital and said that since people from the Luo and Luhya communities had combined forces to vote for Mr Mututho, they must leave this place,” Ndege was quoted in a Daily Nation report of July 3, 2011.

“Before the violence erupted, he added, all machetes in a local supermarket were bought. He is convinced that these weapons were used in the attacks on Ms Kihara’s perceived enemies,” the report added.

The MP, who joined active politics in 2003 succeeding her late husband Paul Kihara as the Naivasha MP, lost to Mututho of Kanu in that election.

Kihara vehemently denied any role in the post-poll chaos and celebrated when the Ocampo list of suspected perpetrators was released in December 2010. She was not on it.

"This is a big relief for me and my family. Our lives have been in a mess since people started linking me with the violence," Kihara said then.

She was a person of interest in the probe and was interviewed by ICC investigators in Arusha, Tanzania, in 2011 after she refused to travel to The Hague, Netherlands. She was questioned for two days.

She was accused of fanning violence from the PNU side in Naivasha, which was a hotspot.

The ICC interrogators sought to find out whether she organised and funded the violence in Naivasha and her link to Uhuru Kenyatta, who stood accused of bearing the highest responsibility.

She would in April 2016 say she rejected an ICC request to testify against President Uhuru Kenyatta.

"I refused to be lured by those lucrative deals they were giving me and I ended up becoming a key defence witness and that is how the case against the President collapsed," she said at a meeting in her home in Maraigushu where she declared her bid to recapture Naivasha parliamentary seat.