• Wanjigi appears to be in good touch with what it would take to win over the majority of youth, at least in Nairobi.

• Heading towards 60 years of age, he is still young and ready for the murky waters that is Kenyan politics where he is not a newbie but a veteran. 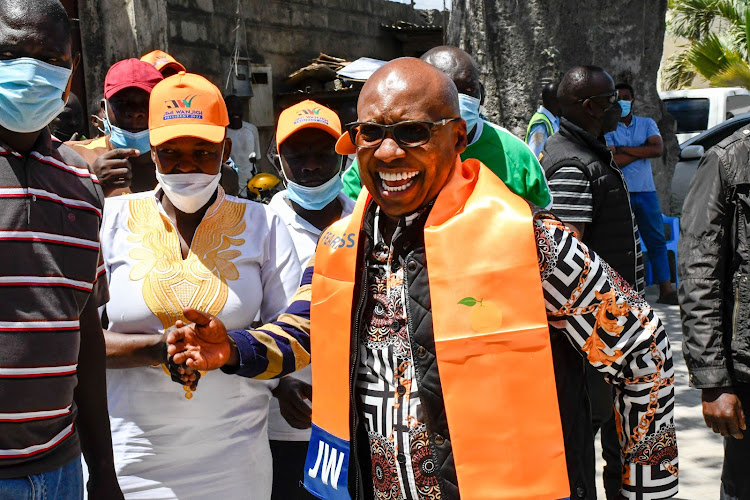 A few months ago, businessman Jimi Wanjigi announced his desire to be Kenya’s next President on the ODM ticket.

It was an audacious move that Kenyan youth seemed to quickly embrace. Youth opinion-shapers, among them artists Eric Omondi and Ezra of FBI, quickly welcomed his entry into the ring and started to champion his bid.

Wanjigi appears to be in good touch with what it would take to win over the majority of youth, at least in Nairobi. Heading towards 60 years of age, Wanjigi is still young and ready for the murky waters that is Kenyan politics where he is not a newbie but a veteran.

Many might remember when ODM leader Raila Odinga camped at Wanjigi’s home along old Muthaiga Road as the authorities were said to be baying for the latter’s blood. And who knows? Maybe Raila - and by extension his father former Cabinet minister Maina Wanjigi - may have saved him.

It appeared there were irreconcilable differences between him and President Uhuru Kenyatta particularly because of Wanjigi’s support for Raila, having been an insider of government operations and a friend of the head of state.

Wanjigi had developed some concrete plans for Raila, including the Nasa tallying centres, which were to harness technology to give the opposition leader a fallback plan, if he won elections and Jubilee rigged, or to put up a strong defence for a repeat or coalition government if he lost. He bankrolled part of the campaigns and gave guidance being in Raila’s very classified planning team.

As Kenya ushered in 2013, it is believed Wanjigi had secured some serious contracts from the time of the Kibaki government, where he had been a serious wheeler-dealer.

One of those was the construction of the SGR, where he is said to have been elbowed out when the Jubilee government took over. He was livid that he had been disenfranchised. His subsequent disappointment or bitterness drove him to rally his intellect and resources to support Raila.

Married from Ukambani, Wanjigi cuts the image of a futuristic Kenyan leader who is unbounded by the tribal strings that most politicians thrive on. He exudes absolute poise and firmness, and Kenyans love strong leaders -politics is not for the faint-hearted.

When Wanjigi speaks to Kenyans and with his infectious laughter, he earns the support of many a youth, especially the Twitter and Instagram generation. A man with the gift of the gab, Wanjigi uses communication effectively, a brilliant example being in 2018 when as the authorities sought to arrest him and as he evaded their efforts, kept the public fully updated on the goings-on. He knew very well it would take a gullible government to do something silly as Kenyans and international community watched.

Compared to overran former Nairobi Governor Mike Sonko, Wanjigi is the real don. He has not been accused of corruption. He has worked hard and used his ties in government effectively to build an empire. The man is self-made, give it to him. He does not show off and lives discreetly, despite the massive wealth.

Often there will be talk about his palatial homes or bullet-proof vehicles, but Wanjigi is unlike the camera-happy and loose-talking Sonko, as he is not ostentatious.

Sonko’s hitherto promising political career ended in a whimper after years of being a swanker and making a series of political blunders, the main one being signing off his people-given mandate of Nairobi to the national government at State House.

Wanjigi rewards his supporters, as he did with Eric Omondi recently unlike other politicians who are eccentric and users of youths who toil and moil for them.

Omondi has employed video and music to create content for Wanjigi that has gone viral. Short videos are the most effective means of communication, especially if one is to impress and earn the support of the youth of today who comprise over 65 per cent of the population.

But Wanjigi, if he enters the fray of Nairobi politics, might stand a better chance of winning than running for president.  Nairobi needs new and grand ideas, but the bearer of them will be important at a time when scrutiny of candidates by the electorate has become paramount and hence one’s believability is key.

Among Wanjigi’s supporters is former Starehe MP candidate Steve Mbogo. With the endorsement of Raila and others, Wanjigi would be the man to beat in Nairobi.

Of course, a great campaign organisation is indispensable with apt branding and media presence for effective political communication. As governor, Wanjigi would be an upgrade from recent shenanigans.

Critically, many have argued Nairobi requires a chief executive-like governor, who would thoughtfully address the dire challenges the city faces. The long-standing transport sector mess, lack of important services such as water, garbage management, poor drainage network, and many others require a hands-on person to address decisively.

Although those who fronted Polycarp Igathe to deputise Sonko may not have had the needs of the people at heart, the deputy could have done well if granted the opportunity. But then, Sonko would have been like a ceremonial governor, something which he resisted successfully.

Wanjigi will not face the same conundrum as Sonko because he embodies the two dimensions as he can be both politically popular and be a successful businessman thus a good CEO.