Like the ICJ, the campaign against ICC was peppered with half-truths about the nature of prosecutions undertaken by the court

• Uhuru seems to be dusting off his playbook from his battle at the ICC where he made history as the first sitting head of state in the dock.

•  He plans to end his tenure the same way he started it: With the country throwing another tantrum on the international arena and trying to bully another international court. 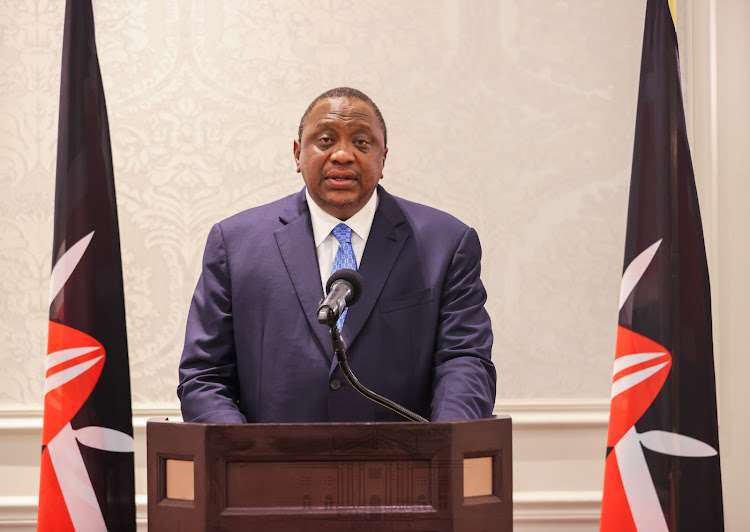 When he was elected in 2013, President Uhuru Kenyatta, along with his running mate, William Ruto, had just been indicted by the International Criminal Court for crimes against humanity in relation to the 2007-08 post-election violence.

Once in power, the duo set about an ultimately successful campaign using the resources of the state to intimidate witnesses and frustrate the court into dropping the charges against them.

Now in the final year of his final term, it appears Uhuru plans to end his tenure the same way he started it: With the country throwing another tantrum on the international arena and trying to bully another international court.

Just days before the International Court of Justice delivered its judgment in the Kenya-Somalia maritime border dispute filed by the latter, the Foreign Ministry last Friday announced the country was “withdrawing its recognition of the Court’s compulsory jurisdiction”.

It declared it would “no longer be subjected to an international court or tribunal without its express consent”. In doing so, Kenya becomes one of a number of UN member states, including the US, that have withdrawn from the ICJ.

The withdrawal is the latest step in Kenya’s attempts to impose its will on Somalia and to prevent international adjudication of the dispute over a narrow 100,000-sq km triangle of sea shelf thought to contain significant deposits of oil and gas.

After five years of attempts to negotiate a compromise, Somalia eventually filed the case in 2014, occasioning a hissy fit from the Kenyatta administration. In 2019 Kenya recalled its ambassador after taking exception to a map that had apparently been displayed at a conference in London, showing the disputed territory as part of Somalia, despite the fact that Kenya had continued to sell mining licences to international companies in the triangle.

The country also threatened to close camps housing hundreds of thousands of Somali refugees and to force them back over the border and hinted it could withdraw its 3,500 troops serving in Amisom, insisting that a normalisation of relations would be contingent on Somalia withdrawing case.

Meanwhile, at the court itself, things have not been going much better for Kenya, which in 2017 lost its challenge to the ICJ’s authority to rule in the case on the basis that the two countries had previously agreed to settle the matter out of court.

Earlier this year, Kenya refused to participate in the oral proceedings after the court rejected its application to delay the proceedings due to the Covid pandemic (while paradoxically arguing against virtual hearings). This was after the ICJ granted three previous requests for delays that held up the case by 18 months.

The desperate moves to stop the case going forward have been perhaps an indicator of the weakness of Kenya’s case. Clearly, Somalia was the more confident of the two about its prospects at the court, which ruled largely in its favour on Tuesday.

Uhuru seems to be dusting off his playbook from his battle at the ICC where he made history as the first sitting head of state in the dock. At the time, Kenya was engaged in a cynical effort to get the UN Security council to defer the prosecutions, threatening to withdraw from the Rome Treaty that set up the court and trying to engineer a mass walkout by African countries, accusing the court of race-hunting. This was coupled with a campaign at home to find and silence prosecution witnesses and withhold cooperation with the court which led to the collapse of the cases.

The campaign against the ICC was peppered with half-truths about the nature of the prosecutions undertaken by the court, lies that Kenyan authorities were conducting investigations into the President and his deputy, and falsehoods about the Constitution not allowing the prosecution of the president, which it most clearly does.

Similarly, there have been claims by Kenya that the presence one of the ICJ’s 11 justices, Abdulqawi Yusuf, a former president of the court and a Somali citizen, on the bench would necessarily bias the case. Further an alarmist and patently false narrative has been propagated in the Kenyan press and on social media that a Somalia win would effectively render Kenya a landlocked country.

But perhaps most pernicious is the amoral, cynical and transactional direction in which Kenyatta has driven Kenya’s relationship with international institutions. When facing opposition at home from organised civil society to his ICC machinations, his administration took to the UN to try to shoot down a resolution recognising and protecting the role of human rights defenders.

At the AU, not only has he undermined the consensus against impunity for public officials, he has also cynically been pushing the case for Israel to be accorded observer status despite its oppression of the Palestinians. And with the ICC and ICJ, he is exporting his contempt for domestic courts when they don’t give him what he wants.

In the end, undermining international institutions comes at a price. The obstreperous performances at the AU, UN and The Hague fractured many relationships that have taken (and will take) years to mend.

Further, flawed and limited as the international order may be, it does provide an important framework for holding states (and the elites who run them) to account and for resolving disputes between them without resort to a dictatorship of the strongest. By limiting state action, international institutions help to entrench international law and norms that can protect not just states, but, more importantly, vulnerable human beings within them.