Protections in the Constitution exist, not just for the accused, but for all of us

• Some 10 NGOs and the KNCHR sought to be enjoined in the case all claiming to defend the rights of the victims’ family. That is all proper.

• However, it struck me that there did not seem to be any standing up for the rights of the accused, even though they are, by law, considered innocent. 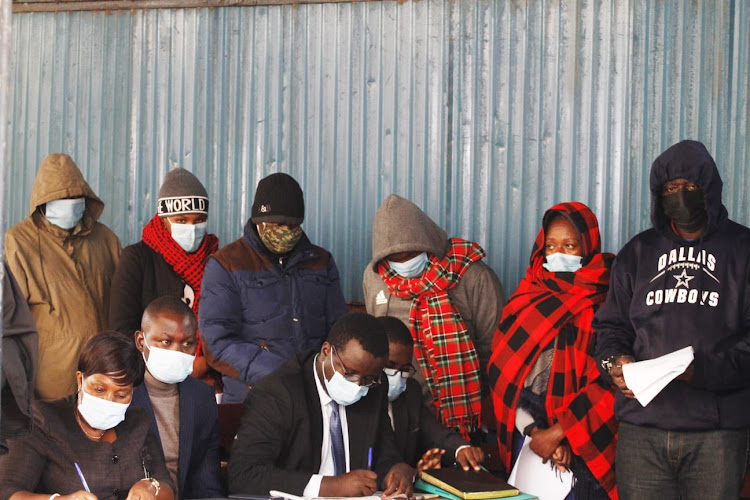 Six cops linked to the death of the Embu brothers at the Millimani law court on August 17, 2021
Image: FILE

At the beginning of August, the country was enraged by the deaths of two brothers, Benson Njiru  and Emmanuel Matura, while in police custody in Kianjakoma, Embu county.

The two young university students had apparently been arrested along with others for violating the Covid curfew. After a public outcry, six policemen were eventually arrested and charged with the murders.

Now, undeniable that the Kenya police force is a brutal and rapacious colonial outfit. The Ransley report described it as “a punitive citizen containment squad” which was created to keep colonial settlers safe from “the potential crime and disorder perceived to emanate from the Africans … in the slum”. Today that ethos continues to be at the heart of policing.

Poverty and youth are still conflated with danger and criminality and the police, as they did in colonial times, still enjoy a high degree of impunity when they abuse, murder or disappear them.

In fact, but for the public outrage, it is unlikely the Kianjakoma issue would have gotten as far as it has: Only a fraction of complaints to the Independent Policing Oversight Authority are ever investigated and an even tinier number actually make it to court.

Despite receiving thousands of complaints in the last eight years of its existence, including more than 2,000 cases of police killings, IPOA’s website only lists a woeful 13 convictions.

It is thus understandable when Kenyans will back any effort to bring police culprits to book, even when the methods employed are dubious. However, this may be the equivalent of jumping from the frying pan into the fire.

Take for example the purported directive from President Uhuru Kenyatta ordering security officials to establish how the two died.

The Constitution under Article 245 specifically forbids any directions to the police on “the investigation of any particular offence or offences”. The police are meant to be operationally independent of the Executive, and, given the history of abuses at the behest especially of the Presidency, that independence should be jealously guarded.

The President and his Cabinet Secretary, however, do have responsibilities for policy and this is where they have failed. Rather than focus on specific cases, which IPOA and the police’s own Internal Affairs department should deal with, the two should be outlining policy proposals to change the culture of policing itself.

When the six officers were arraigned in court, 10 non-governmental organisations and the Kenya National Human Rights Commissions sought to be enjoined in the case all claiming to defend the rights of the victims’ family. That is all proper.

However, it struck me that there did not seem to be any standing up for the rights of the accused, even though they are, by law, considered innocent.

There was a clamour to deny them bail, with the court acquiescing reportedly reasoning that it was for their own safety as “members of the public who know them as police officers may hurt them, if released now”.

But locking up people for their own good when they have not requested it, especially when it is police officers who have, according to LSK president Nelson Havi, “been transferred to safer areas”, is most problematic.

As English philosopher John Stuart Mill pointed out in his essay, On Liberty, “the only purpose for which power can be rightfully exercised over any member of a civilised community, against his will, is to prevent harm to others. His own good, either physical or moral, is not a sufficient warrant.”

Even more egregious is the idea that they are jailed to give time for investigations to be completed, a practice the High Court has already ruled to be unconstitutional.

There is, of course, the argument that the six may intimidate witnesses if set free, which is a valid concern given that the police vehicle in which the deceased were being ferried has been torched in what may be an attempt to destroy the evidence.

However, no one alleges that it is these six who did it and there are conditions the court could attach to bail to discourage contact with witnesses. The point is pre-trial detention should always be a final resort.

It is important to remember that the protections in the Constitution exist, not just for the accused, but for all of us, should we ever find ourselves the subject of the state’s attention.

Already, nearly 30,000 Kenyans are locked up in jail for lengthy periods in atrocious conditions despite not being convicted of any crime. This absurdity of the situation is highlighted by the fact that four of the six cops we have locked up “for their own safety” have contracted Covid-19 while in jail. That alone should make us pause.

"He who comes into equity must come with clean hands," goes the maxim.

Even as we demand justice for the two young men, we should be careful to keep our hands clean. For everyone’s sake.