Their hardline positions, insisting on running for president, complicates matters in Oka 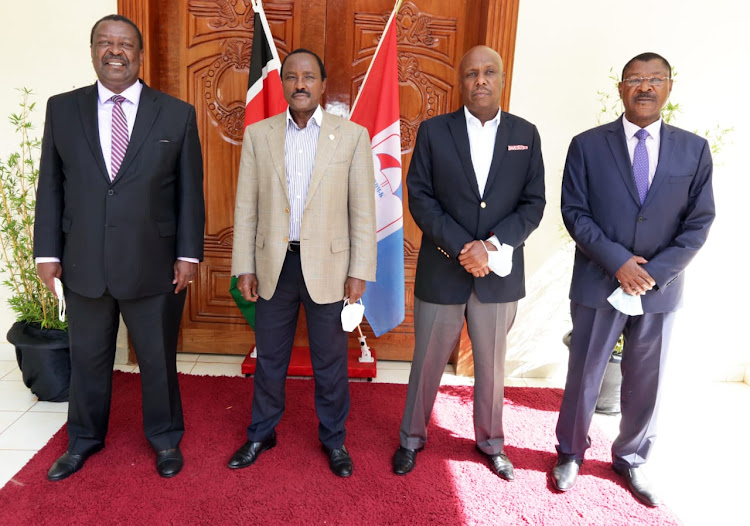 ANC leader Musalia Mudavadi and his Wiper counterpart Kalonzo Musyoka are determined to go for the presidency next year, though both are in OKA.

Mudavadi insists his 2022 presidential ambition is unwavering and now more than ever, he is committed to ascending to power to resuscitate the faltering economy.

Kalonzo also maintains his name will be on the ballot for President and the only people he will compromise with are his three colleagues in the One Kenya Alliance.

He told the Star on Monday that the only conversation he can have with Raila Odinga is that of the ex-PM backing his bid.

Allies of the Mudavadi, a former Finance minister, have also ruled out his playing second fiddle to anyone.

OKA is yet to announce its 2022 lineup and Mudavadi has hinted that he could pick a running mate from the Mt Kenya region. Kirinyaga Governor Anne Waiguru has been mentioned; she says she is open to another party but is noncommittal. 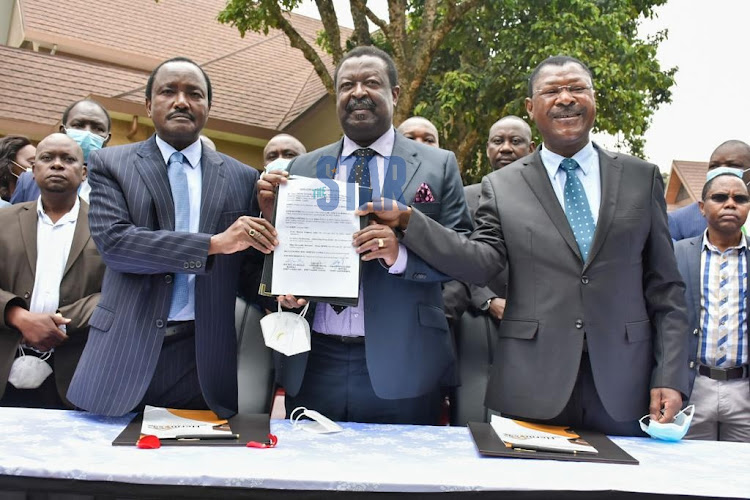 FAREWELL, NASA: Wiper leader Kalonzo Musyoka, ANC leader Musalia Mudavadi and Ford Kenya leader Moses Wetang'ula after they signing an agreement to officially leave Nasa and to officially be part of the One Kenya Alliance on August 3.
Image: MERCY MUMO

Kalonzo is also courting the vote-rich region, saying he is best suited to succeed the President.

If either of the two picks a running mate from Mt Kenya, it will mean the other OKA principals will have to shelve their presidential ambitions, not even settling for the number two position.

Therefore, questions arise on whether OKA will remain intact when picking a lineup.

Uhuru has made it clear he is keen to have the OKA leaders’ team up with former Prime Minister Raila Odinga for a joint candidate.

The head of state's attempts to push unity among former members of the defunct National Super Alliance has faced barriers, especially from Mudavadi and Kalonzo.

Analyst Daniel Orogo said the political life line of OKA seems to have been pegged on the Building Bridges Initiative.

“As BBI is marred by both political and legal landmines so the fate of OKA seems [sealed],” he said.

Orogo pointed out both Mudavadi and Kalonzo have not only launched their presidential campaign secretariats but also have gone further to declare they will be on the ballot for president.

“Both [once] supported Raila Odinga in his presidential bid. In one accord, they declared they would not play second fiddle to anyone.

"On one hand, this might be marking the beginning of the end of Oka. On the other, the turn of events is proving an opportunity for both Mudavadi and Kalonzo to test their political weight individually," Orogo said.

ANC deputy party leader Ayub Savula said OKA is not yet a coalition but an alliance.

He said OKA is not in a hurry to name its candidate because of risk factors, such as blackmail.

“For now, we have decided that each party should go out there and seek support. We will settle on consensus at the tail end,” Savula said.

The Lugari MP said the ANC constitution says the party leader automatically is the presidential candidate.

“We will invoke this fact when we will be settling on OKA's flag-bearer,” he explained.

Ford Kenya national organising secretary Chris Mandu Mandu said OKA is intact and that in the end, the formation will have a candidate.

He said OKA principals are still united, even as they go in different ways asking Kenyans to support their parties.

“The candidate will be Moi, Kalonzo, Wetang'ula or Mudavadi, or any other person who has joined the formation. They will have a consensus and agree who becomes the candidate," Mandu said.

Analyst Joseph Mutua, however, said OKA will be playing the role of a spoiler or trying to force a run-off.

“They know they cannot win the presidency on their own without either Raila or Deputy President William Ruto. Since I do not see them working with Ruto, they could be ruining Raila's chances,” he explained.

Kalonzo has made it clear that he would rather retire from politics than support Raila.

He said it would be unthinkable to support Raila for a third time and urged the former Prime Minister to instead support him.

"I don't see any person convincing me to support him,” Kalonzo said.

Mudavadi said talk about his joining any coalition is premature,  insisting such a move can only be made by his party's top decision-making organ.

Having been mandated by his party to seek the presidency, Mudavadi dismissed claims he could consider backing another candidate.

“These narratives being peddled that some of us have been boxed into a corner to support a certain candidate are far-fetched,” he said.

ANC leader tight-lipped on working with Raila, says in 2022 Western will support their own
News
2 months ago

The ODM party is pushing Raila to name running mate from the region.
News
1 month ago
by ALLAN KISIA Political Writer
Siasa
17 September 2021 - 06:40