So when he said he will not allow himself to be intimidated, he probably meant it.

• His activism vibrance was at its peak during the Second Liberation period. 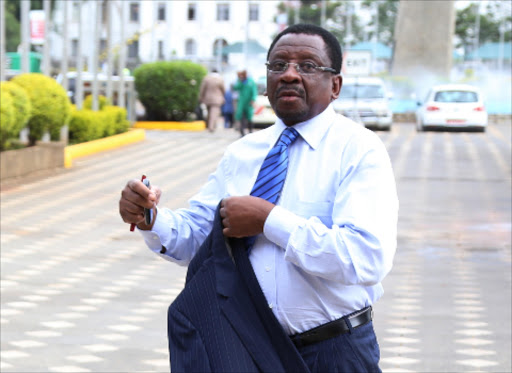 He has been locked up more times than he cares to remember, once in solitary confinement for two months.

So when James Aggrey Bob Orengo, 70, said he will not allow himself to be intimidated, he probably meant it.

The Siaya senator on May 6 said he will not allow himself to be intimidated or directed on how to execute his roles. He was discussing the Constitutional (Amendment) Bill, 2020 in the Senate.

In what was seen as a salvo to rivals in ODM, Orengo said he can never be intimidated in political life, given his many years in Parliament.

"I have seen presidents come here and go. I have seen people who on their words you would leave this House and be locked in the same day. They have come and gone," Orengo said.

"If my day comes, I will accept it. But my conscience, the way I was brought up, I can never sell it, I would never.”

Orengo told KTN in a past interview that he is probably among those with the highest number of prosecutions in Kenya.

“I have spent a day or two in a cell in almost every part of this country — in Nyeri, Mombasa, Kisii and Vihiga. All over,” Orengo said in the Person of Interest interview.

By the time Kanu was toppled from power and President Mwai Kibaki took over, Orengo said, he had 15 pending criminal cases.

Almost two decades later, after President Daniel Moi – who detained him in Kamiti and Naivasha prisons for six months in each, and Kodiaga Prison in solitary confinement for two months – left power, Orengo remains as vibrant.

Orengo was born in Kisumu in 1951, brought up in his early life in Kiganjo, Nyeri, where his father worked as a police trainer, moved to Nairobi before relocating to Ugenya for his education and to learn Dholuo.

The young Orengo was enrolled at Ambira Primary School in 1958, where he studied until 1964.

He was admitted to Alliance High School the following year for his O and A-levels until 1970.

At Alliance, he met the likes of Mzee Jomo Kenyatta, Tom Mboya, Jaramogi Oginga Odinga, Ronald Ngala, who had a son there, and Jeremiah Nyagah during their visits.

The speeches of Mboya and Jaramogi on “the language of transforming society” inspired him to join politics. Mboya once invited him to his library in Lavington, which shaped his reading behaviours to date.

His political journey would, however, start when he joined the University of Nairobi to study law in 1971.

At the time, he said, there were many debates at the university and the top one then, like today, was the Middle East crisis. An Israeli envoy and an Arab League leader came to the institution to talk about the problem.

In his first year, he developed an interest in student politics, winning the seat in his second year against Wamwangi Kinuthia, former Transitional Authority chairman.

It was at this point that he caught the national politics bug and got involved at the constituency level.

When a by-election arose from an election petition in 1980, Orengo threw his hat in the ring and succeeded Mathews Ogutu on the Kanu ticket at the age of 29, making him the youngest MP. He says he had nothing, not land or a house. Not even a wife. He lost the seat in the 1983 snap elections.

He remained in the cold until 1992, when he returned to Parliament on the Ford Kenya ticket after defeating his brother-in-law, Stephen Ondiek, of Kanu.

He lost the seat again in 2002, when he ran for president on the Social Democratic Party ticket. He garnered a paltry 24,524 votes, 0.42 per cent of the count.

In 2007, he was elected Ugenya MP on the ODM ticket and consequently appointed Lands minister.

In 2013, he was elected Siaya senator, a position he successfully defended in 2017.

He says only Kisumu Governor Anyang’ Nyong’o and Orengo, of all elected leaders in that land, who do not carry the 'Made by Raila' tag.

Orengo was forced into exile in Tanzania alongside former Eldoret North MP Chelagat Mutai in 1981. He was, however, repatriated alongside Kenya Air Force soldiers who were accused of the 1982 failed coup in a swap with Tanzanian soldiers who had escaped to Kenya.

At some point, he says, he shared a cell with coup leader Hezekiah Ochuka.

Orengo is among the politicians in the iconic photo in the back of a pick-up truck during the Saba Saba rally flashing a Ford Kenya party salute.

In the civil society world, Orengo was also a founding member of the Muungano wa Mageuzi (Movement for Change), a cross-party lobby group.

Orengo’s ties with the Odinga family are old.

Orengo’s father and Jaramogi Odinga went to the same school, Maseno. He was also a friend of Raila’s brother Agola Odinga at their early age.

‘Orengo was Oginga’s favourite. He liked him very much,” a political reporter said.

So even when Raila and Orengo fought over Ford Kenya following the death of Jaramogi in 1994, it was sibling rivalry.

With Kijana Wamalwa, Orengo ran away with Ford-K, abandoning Raila and forcing him to form the National Development Party.

As a lawyer, Orengo was among the few advocates on whom Kibaki conferred Senior Counsel status.

He says he has represented Kibaki, Jaramogi, Raila, handled the Ouko and Julie Ward murder cases as well as recently leading the team that won the 2017 presidential election petition.

He is married to lawyer Betty Murungi, sister of Meru Governor Kiraitu Murungi.

Their children are Bob, Micheal, Zeni, Steven, Josephine and Lynette.

Orengo: I cannot be intimidated, directed on my work

Orengo said he will continue to perform his duties and speaking his mind.
News
1 month ago

ODM cracks the whip to punish leaders defying Raila and perceived to be out to scuttle the BBI Bill and referendum.
News
1 month ago
by ELIUD KIBII Subeditor and writer
Siasa
16 May 2021 - 18:45