The Fourth Estate is in trouble. From many quarters, people are taking aim instead of supporting free expression

• Public figures must show a higher degree of tolerance to public criticism than ordinary citizens and damage awards should not be so high. Apologies and corrections are important and appropriate. 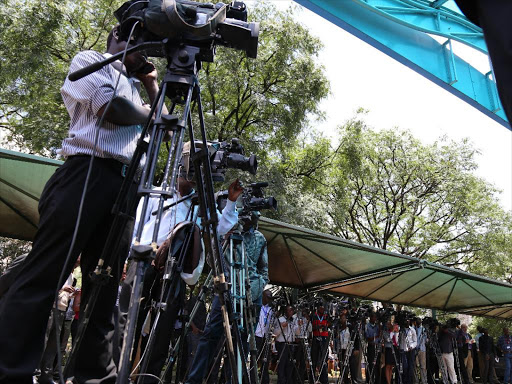 Journalists at Harambee House during a past media briefing.
Image: FILE

The role of the media in our democracy cannot be underrated, given its linkage between citizens and elected officials. However, a quick search on the Kenya Law Reports website shows that the media is being silenced by defamation suits.

At the outset, defamation is a restriction on the right to freedom of speech, given its prioritisation of the protection of reputations.

The model applied to enforce it, whether civil or criminal, speaks to the legitimacy of the restriction.

n 2017, the High Court of Kenya, like all other progressive judiciaries that appreciate the institution of democracy, declared criminal defamation under our Penal Code unconstitutional.

A few other African countries have done the same, including Ghana, Zimbabwe and Lesotho.

Criminal defamation is not a justifiable restriction on freedom of expression.

Calls for the abolition of these laws are due to the propensity of those in power to use it as a tool to silence investigative journalism and criticism.

Instead, necessary and appropriate civil action is encouraged. In Kenya, civil actions for defamation are canvassed under the Defamation Act.

Freedom of expression, and specifically media freedom, is a protected right in any democracy. This is because it allows arguments and dissent to occupy a place in the public discourse. [

Under the Defamation Act, a successful civil claim of defamation between two private persons or organisations usually results in monetary damages.

However, a law that should be used to enforce the balance between the right to freedom of expression and media freedom with the protection of reputations has been turned into a tool for the targeted stifling of media organisations and journalists.

Media organisations are facing inordinate judgment debts that continue piling up with increasing cases coupled with the cost of litigation, thereby threatening their very existence.

Interestingly, the weight of the damages is mostly felt in successful suits by public figures for reasons we will explore later.

On April 27, 2016, the Court of Appeal in Nakuru in the case of Nation Newspapers Limited v Peter Baraza Rabando [2016] eKLR revised an award of Sh2 million made by the High Court in Nakuru in November 2006 down to Sh1.2 million.

One of the key considerations in the case was the relatively lower status of the victim of defamation.

The first case involved a not-so-well-known man, Peter Baraza, while the two other cases related to fairly well-known public figures at the time of the publication of the alleged defamatory statements.

In other words, Peter could not be said to have the same place in terms of status, fame, recognition and reputation as the two public figures.

In fact, as the courts have observed, if the complainant of defamation is not known beyond the local limits of his family, residential and work environment, then they would suffer a lesser degree of injury.

The status of the individual alleging defamation is therefore a key consideration in practice when the courts are making an assessment for the damages; the basic argument being that you cannot invoke defamation as a tort if you do not have a reputation, to begin with.

The effect of these inordinately high assessed damages has been to threaten media freedom. The immediate reaction, especially for those media organisations and journalists without the financial muscle to honour some of these debts, is to self-censor.

Some may opt to change their editorial practices to publish only the seemingly ‘neutral content’ lest they offend someone. It would not be an overstatement to go as far as to suggest that some would, in fact, close shop.

In the context of protection of public interest, pecuniary damages should be awarded only where non-pecuniary compensation does not suffice.

The determination for the pecuniary damages should be hinged on the harm suffered by the individual.

It should not be enough evidence that statements were published in a ‘newspaper of nationwide circulation. One of the factors rarely looked at by the courts is the capacity of the defendant to pay. Courts should adopt this as a factor as well.

As earlier discussed, defamation suits against the media by public figures have resulted in disproportionately high damages.

The level of pecuniary damages awarded must not act as a potential deterrent to legitimate expression, but some of these awards have the ability to bring media organisations to their knees.

The purpose of free speech and media freedom is that rigorous public debate is encouraged without intimidation for liability of unintended errors.

More so, public figures have to tolerate a higher degree of criticism than ordinary citizens by the media to encourage debate in a democratic society.

By taking public or state office, they assume the risk of their public and private behaviour being discussed by virtue of their being in the limelight.

The defence of ‘without malice’ in the Defamation Act needs to be nuanced.

For the defence to fail, the public figure should prove with a precision that the publication was not only reckless and acted without due care, but also that it was made with full knowledge that it was false; made consciously and calculated to bring the complainant into disrepute.

Therefore, the standard for defamation suits for public officials should be stricter than that of private individuals.

The responsibility of media organisations and journalists to mitigate against the risk of defamation suits or the success of the suits as the case may be lies within the defences of defamation.

In order to satisfactorily prove the truthfulness of ordinary factual reporting, a journalist is faced with the risk of revealing their sources or unveiling whistleblowers.

The Defamation Act also provides for the right of reply — an opportunity for individuals to correct errors on record.

Courts should prioritise the use of available non-pecuniary remedies to redress any harm to reputation caused by defamatory statements, such as this right of correction or right of reply.

Second, media organisations have a duty not to publish defamatory information maliciously.

Therefore, they should exercise due diligence so they are not found culpable of gross negligence. This is in compliance with media ethics.

The upshot? Public figures must show a higher degree of tolerance to public criticism than ordinary citizens.

Being the ones with the relatively higher status of recognition, fame and reputation, any successful suit in defamation is likely to burden media organisations.

Worse, if it is a case of an individual journalist. The burden being imposed by inordinately high pecuniary damages against media organisations threaten media freedom.

Our Defamation Act needs to be reviewed in order to favour public interest in the context of media freedom. In addition, the assessment of damages in the Act in relation to sentences of similar criminal offences should be repealed.