Prof Olive Mugenda: A woman of many hats

• Mugenda, an alumnus of Alliance Girls High School, earned her PhD at 33 in 1988 from Iowa State University

• She became the first woman to head a public university in Kenya and the Great Lakes region. 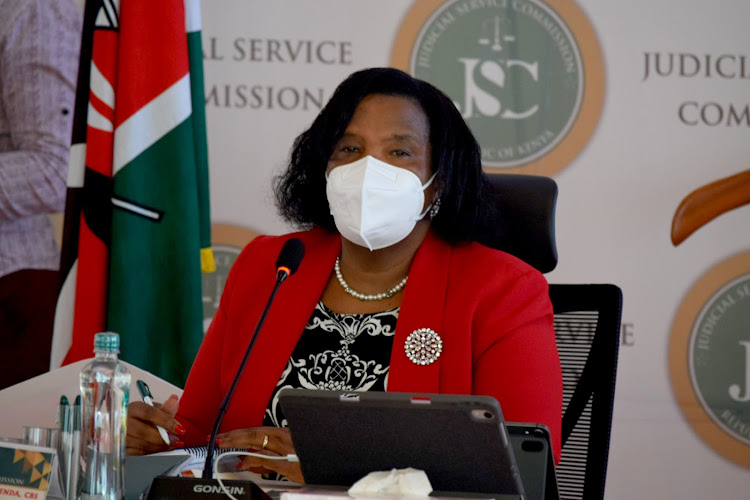 Judicial Service Commission interviewing panel chairperson Olive Mugenda during an interview session with one of the candidates at the CJ'S garden, Supreme Court, on April 13, 2021
Image: CHARLENE MALWA

Prof Olive Mwihaki Mugenda, currently chairing the panel for the Chief Justice recruitment, is a woman of many hats.

Mugenda, who is listed as Judicial Service Commission vice chairperson, took up the role of chairing pannelist following a petition to the commission by Senior Counsel Philip Murgor, who is also one of the CJ candidates. Mugenda is in the JSC as a public representative.

Murgor sought to have acting Chief Justice Philomena Mwilu stopped from chairing and sitting on the interview panel. As the acting CJ, she would have been the one chairing the panel.

There was also a petition by Philip Muchiri, Damaris Ndirangu and Samuel Wanjiru who wanted Mugenda stopped from sitting in the JSC for serving in two distinct state offices.

While circumstances might have led to the professor of family studies and consumer economics heading this process, it cannot be said of her other accolades.

Mugenda, an alumnus of Alliance Girls High School, earned her PhD at 33 in 1988 from Iowa State University where she also attained her masters. She went on to become the first woman to head a public university in Kenya and the Great Lakes region.

Prior to that, she attended the University of Nairobi, where she graduated with a Bachelor of Education degree.

She became Kenyatta University vice chancellor in 2006 and is credited with increasing its budget from a low of Sh1.5 billion to a high of Sh9 billion by the time she left in 2016.

Some of her legacy projects include a Sh1 billion library, lecture halls and buildings for schools of engineering, tourism and economics. A funeral home was also built during his tenure.

The most notable development during his tensure was the Kenyatta University Teaching, Teaching and Referral Hospital with 500-bed capacity. She has been chairing its board since 2019.

Her profile at Daystar University, where she is also serves as a board member says: “She ably turned [Kenyatta] University into an entrepreneurial and research institution, and championed innovation in academics, administration and research.”

Among other boards she serves in or has served in include UBA Kenya Bank Limited, a multinational financial institution where she is a non-executive director; African Centre for Transformative and Inclusive Leadership Initiative; the Steering Committee for the Young African Leadership Initiative; and Global Training and Research Programme, an NGO owned by the University of California.

When she retired as vice chancellor in March 2016, the university council proposed a Sh100 million send-off package, which she turned down.

She was installed as the second KCA University chancellor on February 21, 2020, replacing Prof Arthur Eshiwani.

She was married to fellow professor, Abel Mugenda, for 36 years. They met as teenagers in Thogoto, Kiambu county. They were blessed with four children. He died on January 5, 2019.

Mugenda mourned her husband as supportive, saying, “I am what I am today because of you.”

President Uhuru Kenyatta said he died after a short illness but media reports indicated he might have committed suicide.

However, the Saturday Standard, citing a police report, said the university don leapt to his death from his hotel room in Nyeri town.

“Documents at Nyeri police station indicate that the officers had received a report that a man who had booked into the hotel as Abel Mugenda had fallen from a ledge on the sixth floor and died on the spot,” the Standard reported.

The statistician and academician had stayed at the hotel for four days—from January 2. Prior, Abel had filed for divorce over domestic issues.

This is ahead of the JSC interview exercise for the Chief Justice position.
News
2 months ago
by ELIUD KIBII Subeditor and writer
Siasa
18 April 2021 - 05:00