Machakos senator says she will always respects and protects her husband Muthama.

• She had an evangelism programme at Bibilia Husema Broadcasting Radio.

• She recently said after winning the Machakos senatorial by-election that she will continue with the programme. 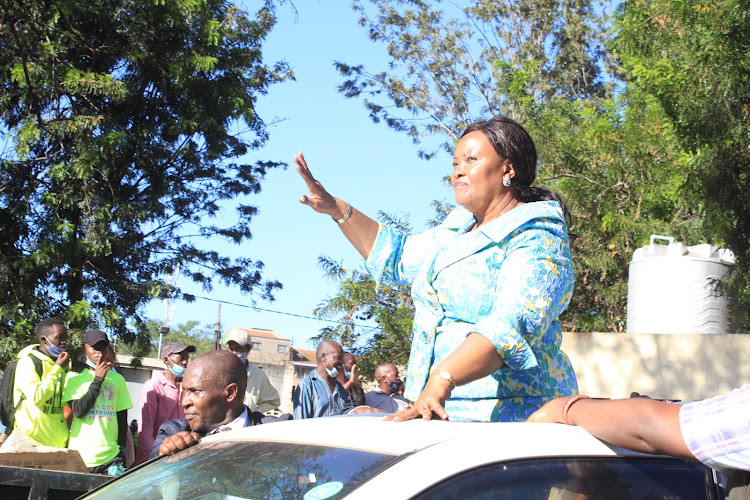 Wiper candidate for the Machakos senatorial by-election Agnes Kavindu greets supporters in Machakos town on her way to Mulu Mutisya Gardens for a rally on Tuesday, January 26, 2021
Image: LINAH MUSANGI

New Machakos Senator Agnes Kavindu says her passion to support the less-privileged in society pushed her to politics.

She says she has had more than a fair share of suffering and understands what it entails. Kavindu, however, notes that despite facing formidable hurdles, she never gave up.

Born in Ngonda village, Matungulu, Machakos county, Kavindu went to Ngonda Primary School before getting married to former Machakos Senator Johnson Muthama in 1978 with whom she has four children. They separated in 1983 before reuniting. She is now a grandmother.

She said she had been supporting the destitute put food on their table and have roofs over their heads. She said she also supports needy children’s education and believes that being in leadership will enable her to mobilise more resources to the cause.

Kavindu has been a pastor, ministering in various forums, including churches and crusades. She had an evangelism programme at Bibilia Husema Broadcasting Radio. She recently said she will continue with the show.

In a past interview, she said she is a farmer. Her political journey, however, started in 2017 when she ran for the Machakos woman representative seat on a Jubilee Party ticket and lost to Wiper’s Joyce Kamene. She emerged second despite campaigning for only two months.

She was later appointed by President Uhuru Kenyatta to Tana Athi Board as a member in 2018. Kavindu also got another appointment from the head of state in the 14-member Building Bridges Initiative the same year.

She won the Machakos senatorial by-election on a Wiper ticket, flooring 10 competitors. Kavindu said she joined Wiper after Uhuru, who is the Jubilee Party leader, permitted her and gave her his blessings.

Her marriage has been faced with court battles. “We had divorced but reunited,” Kavindu said during a TV interview in 2017.

The senator had sued Muthama for claiming she wasn’t his wife.

“I have been in court with the senator concerning the claims he isn’t my husband. I am his wife. We are still living together under one roof in his house,” Kavindu said in 2017.

Kavindu says she has been all along protected Muthama whenever he is insulted or politically attacked by his critics.

She maintains that United Democratic Alliance, a party chaired by Muthama, shouldn’t be insulted because “he is my husband and the father of my children.”