• Only Mwangi and Munyiri, both newcomers in politics, have publicly declared their interest and started campaigning.

• The winner will be determined by alliances, the outcome of the BBI, the shaping of succession politics, financial muscle, track records and agenda. 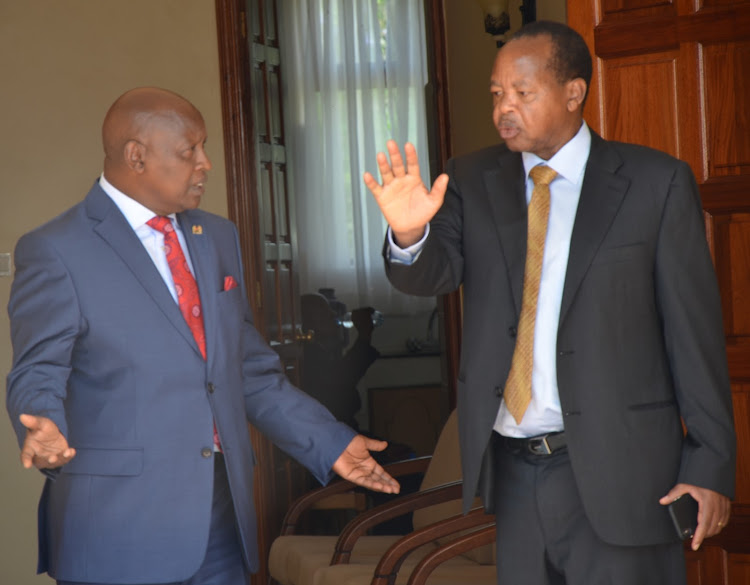 Political heavy weights eyeing the Nyeri governor seat are still holding their horses 16 months to the 2022 elections, even as newcomers hit the ground running.

Only Mathira NG-CDF chairman Wahome Mwangi and former Family Bank CEO Peter Munyiri, both newcomers to politics, have publicly declared their interest and started their campaigns.  Munyiri is an economist.

This is unlike in 2013 and 2017 general elections, when many aspirants declared their interest early in the top seat.

Despite the unusual calm, those who have previously sought the seat are expected to vie again. They include industrialist Thuo Mathenge, businessman Githinji Kinyanjui (Cocorico), Health CS Mutahi Kagwe and hotelier Munene Kairu.

Mater Hospital deputy CEO Steve Gachie is said to be interested but is yet to declare. He is an economist and was in former Governor Wahome Gakuru’s think tank.

Wamahiu unsuccessfully vied for senator in 2017.

While Wamahiu has been relatively quiet, Senator Maina has been meeting elders, opinion leaders, youth and women.

“They are shying away from publicly declaring but their activities clearly show they will vie in 2022,” Nyeri political analyst and 2017 senatorial aspirant Steve Nderi said.

“For instance, they show up once in a while, spend some resources, then disappear.”

He attributes this to the Kenyan culture where money is the major factor in campaigns and having vied in the past, the politicians know how voters behave. They have thus decided to keep their money and wait for the right time.

But newcomers are not taking chances and have hit the ground running to let the people get to know them, and vice versa.

He will count on his performance record, which has changed the opinion people had about the former primary school teacher - that he was not capable of delivering like Gakuru.

However, Nderi said he has to popularise himself as a gubernatorial candidate, having been a running mate in 2017.

"Naturally, running mates are not popular among the people,” Nderi said.

He observes that Kahiga has relied so much on infrastructure development, which people believe does not put money in their pockets.

“So if people are offered money during campaign time, they are likely to forget his development record,” he said.

“He will have an uphill task selling his agenda in constituencies where people feel they have been left out of development projects,” Gatama adds.

“That may be his greatest disadvantage because these constituencies can team up and vote him out,” he said.

Senator Maina, a fierce critic of Kahiga’s administration, has on several occasions accused the governor of having the county’s priorities upside down.

For instance, Maina accuses Kahiga of prioritising the dead more than the living.

The senator has criticised Kahiga for improving the Nyeri County Referral Hospital mortuary road and the morgue itself instead of first refurbishing and equipping the hospital.

Kahiga saidthe dead also deserve to be handled with dignity.

Other key determinants of the governor race are county alliances, the outcome of the Building Bridges Initiative, the shaping of succession politics, financial muscle and individual track records.

Nderi said the electorate will vote for a candidate who will assure them of economic empowerment and this is what Munyiri has been capitalising on.

Munyiri, a technocrat, has realised people may be looking for another Gakuru, who will assure them of a better economy and money in their pockets, Nderi said.

Munyiri said his agenda is to transform the county and drive it towards value addition so it can generate wealth for the people and create jobs for the youth.

“The next thing is to look at is the social security side of our people and drive the county policies towards the pro-poor,” Munyiri said.

Hospitals, he added, should be functional right from consultation to drugs and lab services.

Constituency dynamics will be another factor. Kahiga, who comes from Kieni, will have his chances complicated by Kairu, also from the area.

Munyiri also claims he is a resident of Kieni though he was born and brought up in Mathira. This is also replicated among the constituents, most of whom migrated from other neighbouring constituencies.

Mathira will have the most aspirants. If Maina and Cocorico join the race, it will have at least four candidates, including Wahome and Munyiri.

“So any Mathira candidate will have to look for a running mate from a different constituency that will have no gubernatorial candidate,” Nderi said.

Though Wamahiu may be the only governor candidate from Othaya, others vying for county seats will complicate his efforts of forming alliances with contenders from other constituencies.

King’ara is said to be eyeing the Senate seat, while Nyokabi may be going for either the senatorial or woman representative seat.

Politicians vying for county seats form alliances when elections are near, with the alliance members drawn from each constituency.

The alliances involve the governor, deputy governor, senator and woman representative, while those without county level candidates are promised the speaker’s and majority leader’s seats.

It may also depend on how they align themselves at the national level if the region’s kingpinship will be obscure.

Currently, President Uhuru Kenyatta is the kingpin and there are competing interests in the wider Mt Kenya to succeed him.  None from Nyeri is a frontrunner other than Mutahi Kagwe.

Still, there are candidates who are waiting for the outcome of the BBI, which is expected to shape 2022 politics. This will guide many on how to align themselves with those vying for national seats.

3 groups emerge in battle to succeed Uhuru as Mt Kenya kingpin, with a shot at higher office.
News
9 months ago