How BBI massacre brought Tangatanga back to reality

• The way the Yes side swept the board presents a difficult proposition for DP William Ruto.

• With just 16 months to an election, that is a matter of life and death for him, It already portrays his real sphere of influence as starting and ending within his ethnic group 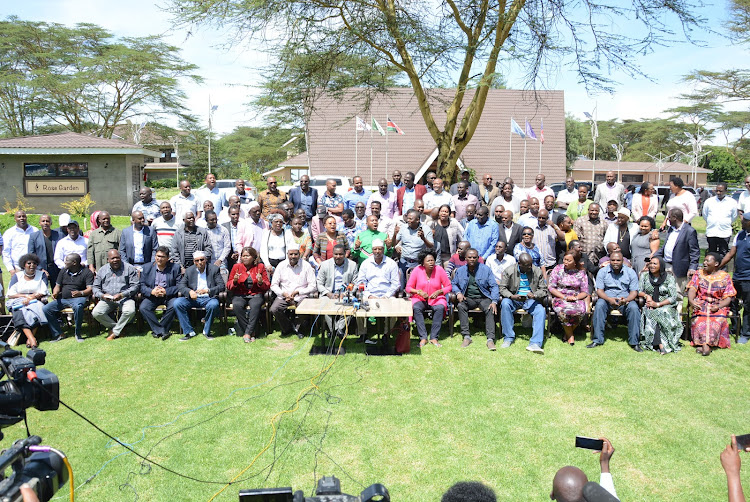 TANGATANGA STAND: Jubilee MPs and senators allied to Deputy President William Ruto during a press conference at the end of a two-day retreat at Lake Naivasha Resort.
Image: GEORGE MURAGE

At the time of writing this piece, the 24 county assemblies' approval required to pass the BBI Bill to place it on the road to the referendum had long been achieved, and it was heading to what looked like an embarrassing whitewash for its Tangatanga opponents.

I am sure meetings this week at Karen Residence of the Deputy President have been heated affairs, with the agenda ranging from the strategic, lik, “how didn’t we see it coming,” to the more mundane, like, “who really is with us in this?”

The way the Yes side swept the board presents a difficult proposition for DP William Ruto. With just 16 months to an election that is a matter of life and death for him, it already portrays his real sphere of influence as starting and ending within his ethnic community. This image that is at variance with the one he has sought to create as the Hustler Clerk! But how did Ruto miscalculate so massively?

There are times I have felt like throwing three books at the Tangatanga strategists and elected leaders.

Barack Obama’s The Promised Land, his former Deputy National Security Adviser Ben Rhodes’ The World As It Is and his former Senior Adviser David Axelrod’s memoirs, Believer. These three books should be  compulsory reading for campaign strategists and candidates.

The three gentlemen delve into the legendary campaign messaging blitz and discipline that transformed a rank outsider African-American into a rock star presidential candidate.

There was no room for error, or for people involved in the campaigns slipping, because they were running a candidate whose prospects were so delicate that a slight moment of eyes-off-the ball would blow up the campaign.

Sometimes one gets the impression that DP Ruto runs a really chaotic operation. One of the underlying issues with nascent populist movements is their desire to embrace anyone and everyone. The DP’s hustler movement has especially been adept at this, bringing on board anyone with problems in their mother parties, meaning that political deadwood easily finds a place of pride on the microphone next to him.

The net effect is that while the DP thinks he is welcoming people from across the width and breadth of the country, he acts as an asylum for bitter, angry politicians and people going through legal problems and dealing with ghosts.

In the process, Ruto’s supposed core message, if it exists, is lost in all this cacophony of noises. Before you finish listening to Aisha Jumwa and Mohamed Ali’s rants at the Coast over Governor Hassan Joho and their problems with him, they have moved Western to Didmus Barasa and Oscar Sudi’s own threats to someone or the other.

Scroll to the next channel and there is Alice Wahome and Ndindi Nyoro antagonising the President in Central. It is all uncoordinated, chaotic and too disjointed for a movement. Everyone appears to speak, everyone has their own agenda and there is no central theme and certainly no message discipline.

Indeed, it is difficult to tell today what happened to Ruto’s initial message immediately after the Bomas launch of the BBI —that “some of our issues have been addressed and we have no intention of opposing it."Was it lost in the chaos created by the Tower of Babel where everyone speaks?

Surprisingly, the one place closer home where Tangatanga can look to for some lessons, is towards their nemesis ODM. Raila Odinga has kept his handshake with the President alive only by keeping a tight leash on any contradiction and antagonistic statements from his side.

It is obvious that there are people in the Orange party who haven’t been comfortable with the Raila-Uhuru arrangement, but it would have been politically suicidal for them to try and second guess the boss.

In fact, as far as BBI is concerned, there were times only Raila was pushing the agenda, while Uhuru remained largely aloof, leading to loud whispers within ODM that Raila was investing too much in a process that would bear no fruits. But you wouldn’t find anyone saying this publicly.

Political messaging goes with discipline, which Tangatanga badly lacks. Perhaps the biggest blunder Ruto and his supporters committed was to underestimate the power of the state and its instruments. Most governments in the world will usually hit the opposition with a smaller rungu than they will do rebels and saboteurs from within.

The rebellion by the Tangatanga faction became less about political issues, and more a direct challenge on the character and competence of the President. As of this week, Tangatanga had even crossed the red line and started questioning the President’s appetite for foreign debt.

Unfortunately for them, the President may be a lame duck with fading influence on the political front, but he remains the Commander-in-Chief until the day he passes on the ceremonial sword to his successor.

As with this county assemblies blitz, he  will still deploy state power to defeat them at the referendum, and woe unto them, if they head into the 2022 elections still antagonising him.

If Ruto is looking for signs of how things will be from this point on, he can start by keenly keeping an eye on Tangatanga legislators from the Mt Kenya region. These people will take a glance at the calendar and remember that their own re-elections are now  on the cards, while Uhuru holds all the aces.

The mighty speed at which Senator Irungu Kan'ata moved from being Uhuru’s eyes in the Senate as Majority Whip, to Ruto’s golden boy of Tangatanga poetry and catchy rhymes in Murang’a, will pale in comparison to that at which pro-Ruto MPs legislators from Kikuyuland are about to do the prodigal son and daughter routine. The Road to Damascus has never been shorter!

Ultimately, the shock for Tangatanga, and their biggest reality moment, is the realisation that this is not the Uhuru they thought they signed with. The unspoken word early in the life of this regime was that Uhuru would remain a mere figurehead, sipping certain  beverages within the comfort of State House, while Ruto would be the real power man running the show and the government.

They never factored in the shrewd and calculating Uhuru, who, with this BBI move, has completed the isolation of his deputy and painted him as one with support only in his ethnic community.

If there is one thing Ruto wouldn’t want now, it is to approach 2022 as only a Kalenjin kingpin and not much more. Like Icarus, son of Daedalus in Greek mythology, he probably flew too close to the sun, believing in his own illusion of invincibility as the wings of wax are giving way. The fall is nigh.