Where was Uhuru looking when Ruto chased him out of his kraal?

Ruto remains stuck in office, uses the trappings of the same office to convene meetings that berate his boss

• Ruto, emboldened and haunted than ever, thumps the nose at the President by showcasing his new United Democratic Party outfit to MPs

• And then, the presumptuous UDA legislators scornfully reduce their monthly contributions to Jubilee Party from Sh10,000 to Sh50. 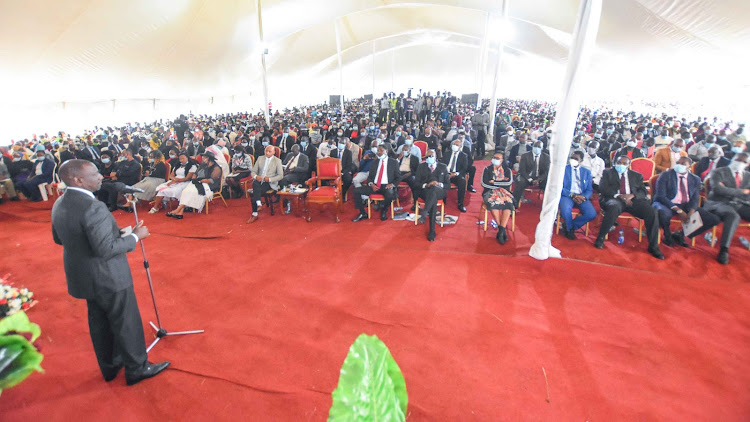 It’s odd that a sitting President has to rush to his base to defend himself not against his kindred from Central Kenya, but his deputy.

Even the tiniest of minion pretenders to be kingpins of particular regions don’t face such odious humiliation of defending oneself against an individual who isn’t native to his region.

It’s even funnier that on the eve of Parliament reopening, Deputy President William Ruto scornfully gathered 139 MPs with 10 others sending apologies to read President Uhuru Kenyatta the riot act in a show of might.

Ruto, emboldened and more haunted than ever, thumps his nose at the President by showcasing his new United Democratic Alliance outfit to MPs on the day six of them were expelled from Jubilee.

And then in a backhanded compliment when borrowing the democratic adage of no taxation without representation, the presumptuous UDA legislators scornfully reduced their monthly contributions to Jubilee Party from Sh10,000 to as little as Sh50.

If one needed an insult that was it. And it didn’t stop there because rebel MPs are going to fund the new UDA outfit. And they didn’t play shy with it. They loudly announced to the world they’ve a new suitor.

The icing on the cake was the backpeddling of Jubilee and ODM on a possible impeachment motion against the Deputy President, a measure meant to save the Uhuru from further goading and humiliation.

The palaver and torment for the President is marked by the unbridled arrogance of a deputy. Ruto remains stuck in office, uses the trappings of the same office to convene meetings that berate his boss. He sits in them, a broad smile of satisfaction across his face.

When he rises to the applause of his ecstatic audience, he doesn’t disappoint. He goes for the jugular. “Referendum”, he confirms “is not a priority."

Yet he’s not about to loosen the strangulation hold on the President. He’s more emboldened in telling the President off over his bromance with ODM leader Raila Odinga. He likens Uhuru to a blind mouse waffling in an alley. When Ruto says BBI isn’t a government priority, he directly rebuffs the President’s often relayed “constitutional moment” parley.

When Ruto attacks the ODM leader for dismantling Jubilee and derailing its agenda, he’s telling the President, “You’ve been played the fool” by Raila. So, in essence, Ruto isn’t scolding Raila but attacking his own boss for being easy naïve prey. When Ruto mounts a show of power at the Ikulu ya Pili ya Kenya, he’s announcing his parallel government.

To demonstrate that, Ruto barges into the President’s Sagana parley with kinsmen as a tribal grouping. He dismisses Uhuru’s pitch on the benefits of BBI to his base as a waste of time away from the Jubilee government agenda.

Indeed, he debunks BBI vaunted benefits as goodies meant to benefit the dynasties’ continued exploitation of hustlers. For every move the President makes, Ruto boxes him in, leaving him no room to manoeuvre.

But why? Why would a president put up with such insulting insubordination and dares? Why would he coddle and seemingly cringe all at the same time, as the Ruto Armada gathers steam? Since when did Ruto become competition for Uhuru in Mt Kenya? How did he do it and where was Uhuru looking? Does the President have no options?

Is 'the system' so infiltrated by Ruto that the President is hanging by a shoestring? Emboldened, could Ruto now swing the surprise of all ambushes, and impeach the President?

There is everything wrong with the President and his deputy going at each other hammer and tongs as the country watches and cheers them on. Soon, one will make the ultimate move to enrage the other and then Kenya will begin to unravel. What will two angry men not do to each other, and to the country?

When ruffled, we’ve seen what one could do when pushed to the wall. On occasions, the President has reminded the insurgents that he is in control, knows what he is doing and where he's going with the country. No one asked him that but it’s the kind of a shot across the bow that panic produces. It says, “I’m not out of options,” including drastic ones should you continue pricking me.

But what options does the President really have and why is he shy of deploying them? Or has he been forced into early lame-duck stages? Stripping insurgents of their Parliamentary jobs, sifting through their financial records for possible secret infringements and even expelling some hasn’t slowed down the Ruto brigade.

But hand it to the President that even under intense pressure and in desperation, he’s able to capture the public imagination. In Mululu village, home of ANC leader Musalia Mudavadi, he ignited debate on the possibility of a rotational presidency.

He argued that if the issue is that a few families have monopolised government in Kenya since Independence, then there is the alternative truth, too: That only two communities have dominated national leadership since Independence and it's time they ceded space for others.

So that then affects leaders from the communities that have produced presidents and excites the rest. He effectively dealt Ruto a low blow that his agitation could cost him, should other communities other than the Kikuyu and the Kalenjin coalesce.

The President didn’t actually propose a rotational presidency. He simply demonstrated how illogical the hustler narrative is when stretched to its logical limits. In which case, Uhuru was debunking the hustler vs dynasty myth.

The idea was a deduction by others from his statement. But it’s an idea that has been simmering below the surface of Kenyans politics and the President’s sentiment merely helped it gain open political traction and debate.

Kabatesi is a communications consultant and comments on politics