JOLTED BY THE HUSTLER 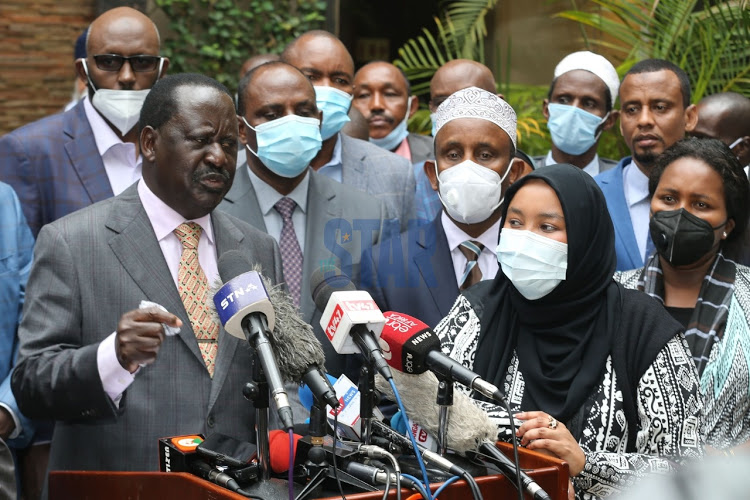 ODM leader Raila Odinga when he addressed the media flanked with leaders from the Pastoralist communities at a Nairobi Hotel on November 9, 2020.
Image: FREDRICK OMONDI

ODM leader Raila Odinga is walking a tightrope between tough political options ahead of next year's presidential duel.

President Uhuru Kenyatta's reluctance to declare his game plan and empower the ODM leader through the complicated succession battle has further boxed Raila into a corner.

An aggressive resurgence by Deputy President William Ruto and lack of a solid strategy by Uhuru's camp to counter his wave countrywide has left Raila pondering his next moves.

Uhuru has maintained a studious silence even as Ruto appears to be taking over Mt Kenya, a crucial vote bloc that Raila would have relied on.

Raila's former loyal strongholds in Coast and Western Kenya are slipping away as Ruto mounts a ruthless assault to position himself as the man to beat in 2022.

He's putting together a coalition of lesser parties that will pack a big punch.

There are jitters within Raila's camp that the Building Bridges Initiative process to amend the Constitution could prove a poisoned chalice following tremours in the President's  Mt Kenya turf. BBI support is less than solid, to put it mildly.

The litany of problems has sent Raila back into the drawing board to craft an plan to buttress his grip on his backyards and penetrate new frontiers.

With the President's Mt Kenya vote bloc already split down the middle, Raila faces a massive headache to counter the hustler nation wave and turn the tables in his favour.

Political analysts say Raila's think tank must come out forcefully to push Uhuru to boldly throw a spanner in the works and redeem  ODM's fortunes in Mt Kenya.

The former chairman of the National Assembly's Constitution Implementation Oversight Committee said the President's backers must quickly devise a strategy to bolster the handshake.

“It is urgent handshake proponents from the larger Mt Kenya region craft a wall-to-wall strategy to enhance the BBI prospects and strengthen the handshake partnership,” Baiya said.

There are concerns vicious infighting among key BBI forces in the President's backyard and sustained forays by Ruto's Tangatanga brigade could have damaged the Uhuru-Raila game plan.

But Kakamega Governor and ODM deputy party leader Wycliffe Oparanya maintained the ODM boss remains the country's most trusted choice if he seeks the presidency.

“Leave those who are making a lot of noise, go to the grassroots and see the kind of support Raila enjoys, it is overwhelming, he is not walking any tightrope,” Oparanya told the Star.

The Raila' ally in Western dismissed the Tangatanga wave, insisting the handshake will produce the country's next president.

“BBI guarantees the country a better future, Uhuru and Raila are working together on this and be sure no one will beat that combination,” he said.

Raila's strategists have been banking  on support from the President's Mt Kenya turf to build a strong machine to vanquish Ruto's presidential prospects.

There is an unspoken feeling among Ruto's supporters the BBI process had been crafted as the Special Purpose Vehicle to market Raila in Mt Kenya and deliver him to State House.

Kimilili MP Didmus Barasa declared the Uhuru- Raila unity pact dead, saying it was built on quicksand with the aim of undermining Ruto and boxing him out of the succession.

“The hustler nation holds the flame of the country's  future and no doubt those who thought they had cornered us are afraid because soon they will be vanquished with their BBI,” the Ruto ally said.

Barasa, a vigorous Raila critic, said the Tangatanga movement has managed to turn the tables on their rivals faster than ever could have been imagined.

“We have nearly 18 months to the 2022 General Election, we have our candidate and are doing everything possible to market him and prepare for the polls,” he said.

Although Raila is yet to publicly declare his presidential ambitions, insisting his partnership with Uhuru is devoid of succession politics, he has warned he should not be ruled out.

Having smelt the rat of suspicions and mischief regarding Mt Kenya support, Raila's party is aggressively campaigning to position itself ahead of 2022.

In late January, Raila will lead all elected members of his party in a critical retreat to review the party's recent performance and develop its 2022 roadmap.

The former Prime Minister must carefully inspire his traditional strongholds in Coast, Western and penetrate regions like Northeastern

Some of the ODM boss's close allies have declared the former Prime Minister will be in the ballot in 2022, opening a ferocious battlefront with the DP.

However, political analysts say the former PM faces faces limited options as he seeks to manoeuvre the terrain and ward off Ruto's offensive.

Mutua said Raila must leave his comfort zone and systematically develop a watertight plan to both enhance his 2022 presidential chances and redeem the party's image.

“The ODM party has been battling image issues for many years, it is only 17 months to the general election yet we see no  aggressive campaign to restore confidence in its structures,” the diplomacy lecturer said.

ODM's Coast popularity faces a formidable challenge from Ruto's Tangatanga movement and threats by some leaders to form a regional party.

Two weeks ago, Ruto stormed Kwale county in victory lap and pledged his hustler movement will take over the Coast.

Formation a Coast regional party is part of Ruto's scheme to reverse Raila's fortunes as he penetrates the ODM leader's traditional bastions.

The spirited efforts to craft a strong Coastal party will jolt the ODM family and disorder Raila's hopes of maintaining a strong grip on the crucial region.

“Formation of a new party will only divide  people further and undermine the unity the region has enjoyed in ODM. This has enabled us to push our agenda as a united region on the national stage,” Joho said, telling off Ruto.

The ODM deputy party leader warned  Ruto's allies elected on the ODM ticket to be ready to resign and seek fresh mandates if they are strong enough.

“Kenya and the Coast will not progress through fraud and lies. We need honest and principled leadership," Joho said.

Ruto's Coast allies maintain they have vanquished Raila from the region.

Malindi MP Aisha Jumwa, who is Ruto's key Coast ally, told the Star the hustler nation has devised a strategy they will soon use to "annihilate" ODM.

“The hustler nation is unstoppable. In coming months Kenyans are going to get a glimpse of the DP's plan to completely vanquish Raila from the Coast," she said without elaborating.

Tangatanga's decisive win in the Msambweni by-election through the DP- backed independent candidate Faisal Bader appears to have given the hustler nation fresh mojo to take on Raila.

The win has been interpreted by Tangatanga as a major blow to the handshake train as well as a warning shot to Uhuru and Raila that the DP remains a formidable force.

In Western Kenya, Raila faces a litmus test in the Matungu by-election as Ruto seeks to assert his authority and win support following his massive incursions in recent months.

The Matungu by-election in March, just like the Msambweni poll, is tipped to be a major battle pitting Raila against Ruto in the battle for the Western vote bloc intensifies.

“Raila is just a paper tiger in Western, we are going to mobilise the hustler nation as never before to completely annihilate Raila's hopes to win our Luhya nation," former Kakamega Senator Boni Khalwale said.

The Tangatanga brigade is said to be sponsoring an opinion poll in Matungu constituency to pick the most popular candidate.

Why 2021 will shape Raila’s political future

ODM leader's handlers are adamant his name will be the first on the presidential ballot.
News
3 months ago

Raila would be provided with a fertile ground for his political reincarnation.
News
4 months ago
by JAMES MBAKA Senior Political Writer
Siasa
08 January 2021 - 06:18