Is the 'Hustler's' march to State House unstoppable?

Ruto has fired up his 2022 campaign on the popular hustler narrative. 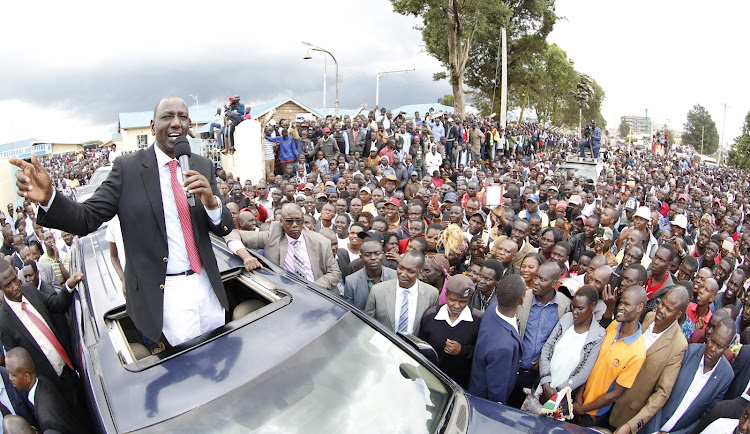 The DP - known for his indefatigable energy, eloquence and uncanny memory for names -has been crisscrossing the country to popularise his bid for nothing less than State House.

Ruto has been ruthlessly sidelined and insulted, his allies have been purged, he's now on the periphery of government and Jubilee - and yet he persists and many observers sayRuto will prevail.

They did everything they could to ruin him, but the Hustler bounced back, reinvigorated.

The second in command — who teamed up with Uhuru Kenyatta to take over the country’s leadership in 2013 — has even dared the so-called "system" and the "deep state" to block his presidential bid, stating his God and "millions of Kenyans" will propel him to the top.

In the last three years, Ruto has fired up his 2022 presidential campaigns, mounting his grand march to State House on the popular hustler-go-getter narrative.

That hustlers vs dynasties slogan continues to resonate and appeal to many hardworking Kenyans, including many in informal settlements.

Ruto's approach is making his rivals nervous, they say he stands for temporary quick fixes, not state-created jobs and solid savings schemes.

Ruto's bag of tactics incLudes strategic raids on what have been President Kenyatta and ODM leader Raila Odinga’s traditional bases of Central, Coast and Western.

Last year, the DP scored a first spectacular win against Uhuru and Raila combined when he backed independent candidate Feisal Bader who went on to win Msambweni, Kwale, in a landslide.

Raila had billed it as a test run for the BBI process. Now he's sorry he used those words.

The Deputy President is also surrounded by a clique of up-and-coming lethal politicians with a grassroots touch and wide appeal. They are deft at impressing the hustler message of deprivation, sympathy and hope deep into the hearts of the masses.

On Ruto’s slum-penetrating tactics, it was none other than Senate Majority Chief Whip and Uhuru ally Senator Irungu Kang'ata who attested to Ruto's skill in his controversial open letter to President Kenyatta.

Kang'ata said BBI would fail "spectacularly" in Uhuru's backyard because it's seen as a tool to benefit the elite, not the masses, no matter how politicians tell them to vote.

He said the Tangatanga camp is more appealing to most of the low-income ad poor residents than the handshake team of Uhuru and Raila from families of wealth and influence .

The Murang’a senator told Uhuru in no uncertain terms the handshake team should prepare to lose Mt Kenya and the Nairobi by-election to Tangatanga, given its common touch, especially among those who are hard-pressed.

“Whereas I cannot dismiss the candidates who have offered themselves to stand with our party, my hunch feeling (and I could be wrong) tells me competitors on offer have a better trajectory going into the race,” Kang'ata said in the explosive letter to major media houses.

He added, “There are many reasons for this but they include some competitors have a better gift of the gab and slum-penetrating tactics.”

Political risk analyst Dismas Mokua said it's premature to declare Ruto's march to State House unstoppable, especially as the general election is ore than one year away.

Mokua told the Star a lot will happen before 2022 and those events may permanently change the matrix of the next elections.

“If anybody tells you that Ruto’s march is unstoppable, then that is a naïve man who is looking at the politics from an irrational and emotional space. One day in politics is too long, 18 months is a nightmare, "Mokua told the Star.

Constitutional lawyer and analyst Bobby Mkangi said Ruto has made a mark in the race to succeed President Uhuru, which is working to the DP's advantage.