Through her legal and political life, Karua has arguably cut her niche as an advocate of social justice.

• Alongside other other leaders and activists, Karua has formed the Linda Katiba Movement.

• Interestingly, however, Karua in 2014 pushed for a referendum under the Okoa Kenya Movement led by Cord. 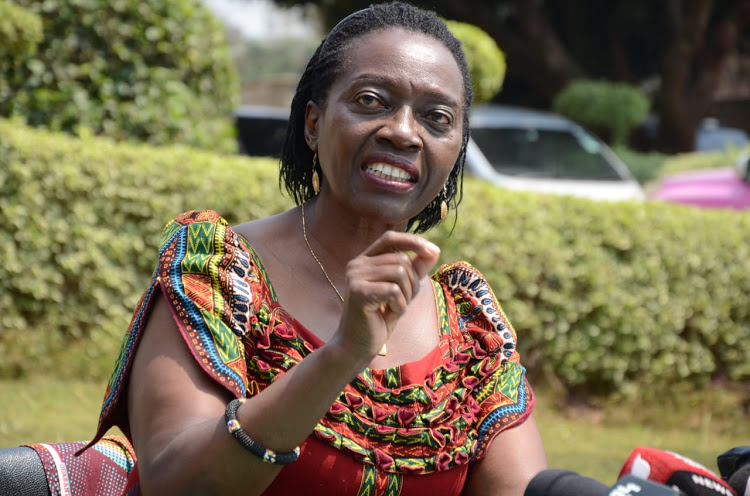 Martha Wangari Karua is emerging as the de facto No campaign leader to the BBI referendum.

Interestingly, Karua in 2014 pushed for a referendum under the Okoa Kenya Movement led by Cord.

So who is Martha Karua?

Karua describes herself as a “mother of two and granny, 2013 presidential candidate, consummate politician and advocate for social justice” on her Twitter bio.

She was born in September 1957 in Kimunye, Gichugu, in Kirinyaga as the second-born in a family of eight—four girls and four boys.

She studied law at the University of Nairobi from 1977-80, and proceeded to the Kenya School of Law for her post-graduate diploma. Between 1981 and 1987, she worked as a magistrate.

She resigned in 1987 to start Martha Karua & Co Advocates, which she ran until 2002. Some of the prominent cases she handled included the treason trial of Koigi Wamwere and MP Mirugi Kariuki.

Through her legal and political life, Karua has arguably cut her niche as an advocate of social justice. She participated in the struggle for multiparty politics in the early 1990s.

In 1992, she won the Gichugu parliamentary seat on the DP ticket.

On June 16, 2001, Karua famously walked out on President Daniel Moi – quite a rare and audacious move then – when Kanu supporters attacked the opposition at a harambee in Kerugoya.

Karua would later be among the architects of Narc, which won the 2002 general election.

In the Kibaki government, she served as the Water, and Justice and Constitutional Affairs minister.

She later became a key figure in defending President Kibaki’s controversial re-election at the KICC in 2008. This role has recently come to haunt her as critics accuse her of defending ”a rigged election”.

She became Narc Kenya leader on November 15, 2008, on whose ticket she unsuccessfully ran for president in 2013.

On April 6, 2009, Karua resigned as Justice and Constitutional Affairs minister citing frustrations in government. A few days before the announcement, Kibaki had appointed judges without her knowledge.

Vying for president under the 2010 Constitution meant she was barred from standing for MP. She remained in the cold and later joined Raila Odinga and other opposition parties and civil society organisations under the Okoa Kenya Movement in August 2014. The movement sought to review the Constitution. Others in the bandwagon were Peter Kenneth, Cord principals Kalonzo Musyoka and Moses Wetang'ula

Civil society activists in the multiparty clamour, among them Richard Leakey, Davinder Lamba, Atsango Chesoni, Ndung'u Wainaina, George Kegoro, Okiya Omtatah, Harun Ndubi and John Githongo, were also in the movement to fix “glaring flaws in the Constitution”. Most of them, like Karua, are now opposed to the proposed law change.

In 2017, Karua vied for Kirinyaga governor and lost to Anne Waiguru. She petitioned the election all the way to the Supreme Court

The East African Court of Justice recently awarded her $25,000 over the petition, with the Arusha-based court saying Kenya denied her justice.

Despite being in the political cold since 2013, Karua has remained evergreen — like her party’s colours — in Kenyan politics.

The plan involves mounting legal battles in court and calling for street protests.
News
1 year ago

BBI dismissed as an illegality 'because it is not people-driven as its proponents claim'
News
1 year ago
by ELIUD KIBII Subeditor and writer
Siasa
06 December 2020 - 05:00