BBI project is a rare opportunity to be seized

• It is unusual, particularly in Africa, to find an incumbent leader talking or accepting to talk about reforms as President Kenyatta is doing. 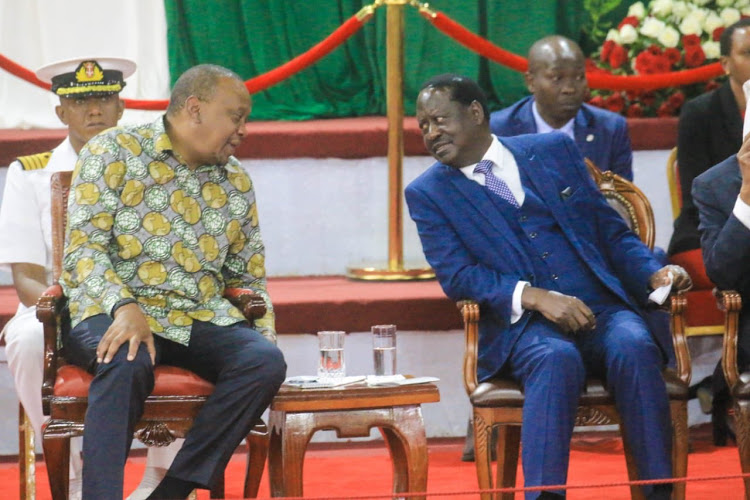 A lot has been said, spoken and written about the Building Bridges Initiative since its inception over two years now.

The initiative that seeks to amend the Constitution to suit our socioeconomic and political circumstances has received widespread support from Kenyans just as it has drawn opposition from other Kenyans.

It is spearheaded by President Uhuru Kenyatta and former Prime Minister Raila Odinga.

However, as a country that has fought so hard to institute reforms in its governance system, we cannot wait to seize an opportunity that seeks to help us realise some of the reforms Kenyans have desired to initiate.

This is especially in the areas that were not adequately addressed by the 2010 Constitution.

In the past, it has never been easy to persuade the previous regimes to accept to engage in any reform agenda. Most governments the world over are not keen to spearhead political reforms when in office.

Such reforms (if not economic or social) are largely viewed to be anti-status-quo and may have the potential to fundamentally undermine or work against the incumbent's administration.

Honestly, it is unusual, particularly in Africa, to find an incumbent leader talking or accepting to talk about reforms as President Kenyatta is doing.

Essentially, what we are seeing are leaders who are much more concerned with tomorrow and about what should be done to make the country better for all Kenyans. They are using their past experiences as a basis for action to bequeath a better Kenya for posterity.

Even the usual political rhetoric hasn't found much room in the current debate as the BBI offers a rare opportunity to transform the way we govern ourselves.

Clearly, whatever level of political developments that we may claim to have achieved in Kenya today is the result of several reform initiatives undertaken right from the time of the Lancaster House conference of 1962 in London.

These are the talks that negotiated Kenya’s independence constitution and paved the way for our self-rule. Since then, Kenyans have participated in many subsequent reform processes aimed at making the country come to terms with the realities of its nationhood.

These include among others, the challenges posed by the multi-ethnic composition of our country, the need for equitable distribution of resources and the necessity for an inclusive system of governance.

While we should not expect the BBI project to be the panacea for all our current and future problems, we must sincerely appreciate the fact that whatever efforts being made to reform our Constitution are positive and strategic.

They are expected to place Kenya on a better political pedestal than the case has been before. Similarly, the leaders behind the reform agenda deserve unequivocal support for their relentless endeavour to make Kenya a country where all people may live together, share prosperity in diversity and co-exist in dignity.

The reforms are expected to bring about a new constitutional order in which Kenyans will cultivate the tenets of nationhood and embrace a culture of democracy and good governance.

It is precisely on these premises that I urge fellow Kenyans to see the BBI agenda as an effort that has presented a unique opportunity for all of us to participate in the reformation of our governance system.

There is no better consensus to be reached than having the President and the opposition leader rally the country around the issues contained in the BBI report.

Ultimately, it will be the responsibility of Kenyans to reject or approve the reform proposals at the referendum. But, when all is said and done, it is Kenya and her people that will truly emerge as the winners.

Therefore, we should seize the BBI as an opportunity for action. For eventually, we may want to talk of having achieved a significant milestone in the history of our country but only if we all exercised responsibility at the opportune time. For such an opportunity doesn’t knock quite often.

It should be noted, however, that the BBI reforms would not constitute the last of such initiatives to be undertaken concerning the 2010 Constitution.

Similar reforms will continue to be undertaken in other attempts to align the Constitution to the prevailing circumstances of the future, and in so doing, the processes will accommodate or make provisions for the desired changes.

In retrospect, we can recall how, some decades ago, the Independence party, Kanu, introduced a constitutional ‘reform’ that made Kenya a de jure one-party state.

The amendment was done through Parliament ostensibly to protect the political interests of the ruling party and its leadership.

It was not a popular reform, though, since Kenyans did not directly participate in the process that effectively plunged the country into decades of ‘single-party democracy’.

As Kenya gradually sank deep into dictatorship and totalitarianism, it took the country about 28 years (from 1969 when KPU was banned, to 1992 when multiparty democracy was restored) to put up a spirited struggle to get the government into undoing the single party clause.

For Kenyans, the available options then were to mount rigorous non-violent resistance.

The efforts included establishing and operating underground political movements such as the Mwakenya and, later, the formation of the Forum for the Restoration of Democracy (Ford).

Kenyans who were opposed to the one-party rule, including religious leaders, paid dearly, some with their lives, through illegal and torturous detentions or confinements and fleeing into exile. The media suffered a lot of intimidation.

This was a result of sustained pressure on the Kanu government from the international community, which helped to push for change in Kenya.

Incidentally, the current plurality of political parties did not come on a silver platter but through a constitutional reform initiative such as the reform agenda that the BBI is working on.

Owing to such historical experiences, we cannot afford, at this moment in time, to squander an opportunity such as the BBI that is offering us a window to review the Constitution to realise the much-needed reforms in our country.

Let us note that human beings reform. Institutions also reform. Even the old Kanu later reformed and became more acceptable. Reforms of any kind are healthy for the survival of any dynamic society.

It is arguably against this background that I urge fellow Kenyans to face the BBI-backed reforms with a positive attitude, while aware that time and tide wait for no man or woman.