Kenyans demand to know how Covid funds spent and stolen

Vast sums budgeted and donated for Covid-19 yet cases increasing, hospitals and health workers ill-prepared. Why?

• Sh500 billion Covid funds represent about one-sixth of Kenya's annual budget and should have made a dent in the pandemic by now. Yet we're still unprepared and health workers ill-equipped.

• The trail of the Covid billions has gone cold. Government gives us the runaround. While Kenyans die, governments speaks in double Dutch despite reports of massive misappropriation. 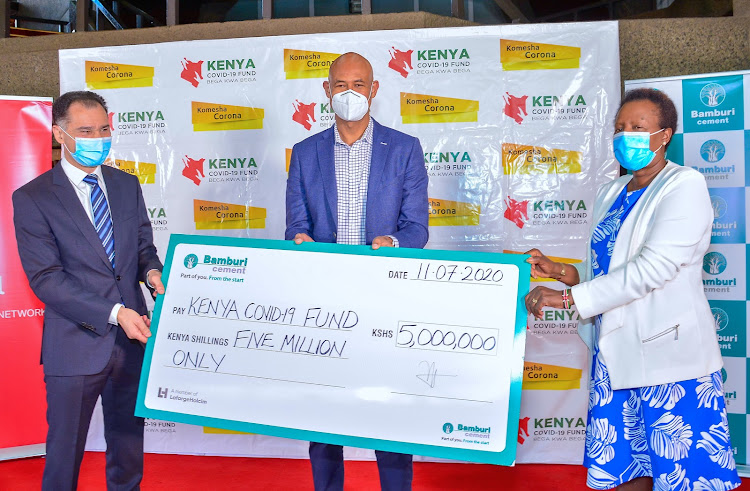 Never since Independence has our national well-being been confronted with a threat of such enormous proportions as that of the novel coronavirus pandemic striking in already very challenging economic times.

Every sector of the Kenyan economy and every stratum of society has endured the worst of Covid-19 with devastating effects on lives and livelihoods. Victims, direct and indirect, include health workers to university dons, pilots, police officers, men and women of the cloth, politicians, rich, poor, black or white - nobody has been spared. There is no order or pattern to its cruelty, no telling where it will strike next.

We have recorded more than 22,000 Covid-19 cases, more than 350 deaths and  as many as 13,400 active cases. Of all infections, 634 were healthcare workers representing three per cent. According to the National Nurses Association of Kenya, eight healthcare workers countrywide have died.

On the economic front, the pandemic and preventive measures have had debilitating effects, with unprecedented business closures and job losses. Tourism, agricultural exports and most productive sectors have been stricken.

The World Bank projects Kenya's economic growth will drop to 1.5 per cent this year against a pre-Covid projection of six per cent - and contract one per cent in the worst-case scenario.

Apart from the containment measures, the GoK has responded by reducing budgets for most other MDAs and increased the Health ministry budget by 10.3 per cent to Sh114 billion for the Covid-19 response.

This is despite a significant drop in revenue collection resulting from the economic meltdown and the economic stimulus programmes announced by the government. Funding for county governments in the front line of managing Covid-19 have also taken a hit, aggravated by the revenue funding impasse in the Senate.

The situation has been worsened by claims of revenue leakages through corruption from the Sh5.5 billion Covid-19 Emergency Response Fund disbursed to counties. It is clear both national and county governments are struggling to cope.

Based on an appeal by GoK for emergency support, international development partners and friends have helped with donations and various forms of assistance.

Conservative estimates put the amount of funding received from various international sources at Sh220 billion  to Sh300 billion since the first Covid case was detected in March. Another Sh2.8 billion has been donated to the Covid-19 Emergency Fund.

Given the annual national budget of about Sh3.08 trillion, this funding is about one sixth of our budget and a significant amount of money. By logic, if Sh3 trillion can sustain the entire economy for a year surely Sh500 billion (one sixth) should have made a noticeable and significant dent in the pandemic by now. This is considering that the allocation to the entire Health Ministry in 2019-20 was slightly more than Sh114 billion.

But unfortunately, despite the magnanimity and generosity of our international friends and partners, reciprocal and parallel action is at the very least absent and at the most, invisible.

With such funds and proper spending, some of our Key Performance Indicators (KPIs) should have been evident in reduced morbidity and mortality rates, better equipped health facilities, better equipment for testing and management and for our health workers. It would also have boosted safety nets for vulnerable members of society affected by Covid-19.

On the contrary, the trail of the Covid-19 billions has gone cold and silent. The morbidity and mortality rates among the general populace and health workers are on an upsurge and the health sector is struggling to cope with the pandemic. Our health facilities have reached a breaking point and the health workers do not have adequate equipment and requisite resources to respond effectively.

Making of a scandal: Covid-19 cash already being stolen?

It is worrying that the government has already spent Sh2.3 billion on Covid-19 response
Siasa
1 year ago

In May for example, a survey by the Kenya Ethical and Legal Issues Network suggested 93 per cent of healthcare workers did not have enough Personal Protection Equipment and 82 per cent of those surveyed were forced to re-use PPEs due to lack of supplies, exposing them to risk of infection and even death. The survey further indicated 90 per cent cited lack of goggles, isolation gowns, gloves and protective suits.

Some 82 per cent lacked N95 masks, 18 per cent lacked gloves while 30 per cent lacked surgical masks. Apart from this lack of equipment, Kenya only had 518 critical care beds by April, of which 439 beds are on average, occupied. We also lack requisite ventilators.

This grave situation is of great concern to Kenyans because, according to official estimates, Kenya has a country infection rate of 4.7 per 100,000 population. Worse still, according to the Kenya Medical Research Institute, the situation could be even more dire. There are suggestions about 2.6 million Kenyans already have Covid-19 and at least 6,000 people could have died based on the current crude death rate.

According to the WHO's guidance on clinical management of Covid-19, 14 per cent of victims will require hospitalisation and oxygen while a further five per cent will require admission to an ICU.

My reading of all this is that on a balance of probability the virus could soon be knocking on any of our doors individually and we may end up needing either hospitalisation or some degree of medicare and attention by health workers who as currently retained and equipped will be unable to cope.

Despite this existential threat to all of us, the National Treasury and the Ministry of Health are treating us to a game of musical chairs. They are giving us the run-around instead of either explaining how much money has actually been received and how it has been spent or why it doesn’t seem to be achieving the intended results.

While Kenyans die, the government is speaking to us in double Dutch amid emerging reports of allegations of massive misappropriation of Covid-19 funds intended to mitigate the spread and effects of the virus.

What intelligible explanation does the MoH have of spending Sh9, 000 to procure PPEs with a market price of Sh4, 500. And what is the explanation for supply contracts being opaquely awarded to companies without capacity?

How is it that MoH is reportedly spending as much as Sh4 million on tea and snacks and Sh70 million on communication during an emergency when health workers are dying due to insufficient PPEs and hospitals lack ICU beds and ventilators?

The Sh70 million was allegedly allocated for communication while media houses had already contributed to airtime for coronavirus-related news updates and telcos had offered officials involved in the fight against the virus a free telephone communication package?

At the county level, the extent of misappropriation of Covid-19 funds is equally disturbing. There are reports of briefcase companies without capacity being awarded tenders to supply sub-standard equipment or in other instances nothing at all.

It is becoming crystal clear that Covid-19 funds intended to stem the spread of the disease, purchase medical equipment, save lives of both patients and healthcare workers and cushion vulnerable Kenyans against the effects of the virus are ending up in people’s pockets, while Kenyans die, our economy crumbles and we lose lives and livelihoods.

I rest my case by urging President Uhuru Kenyatta to take personal charge to protect the lives of Kenyans as his oath of office stipulates, ensure those found culpable of looting Covid-19 funds are brought to book and the misappropriated funds recovered.

Eliud Owalo is a Management Consultant specialising in strategy’ formulation, implementation and control

Senate demands monthly reports on use of Covid-19 billions

We must demand for regular financial expenditure reports from the ministry.
Siasa
1 year ago
by ELIUD OWALO
Siasa
21 August 2020 - 05:00