When he challenged what is obviously Uhuru’s sanctioned leadership changes in Jubilee, he hammered down yet another nail on his political coffin.

• An examination of Ruto's conduct and that of his minions since 2013 provides ample evidence to conclude that he has committed political sins against his boss.

• These acts are not different from engaging in an activity intended to cause political harm to the king, in this case, President Kenyatta. 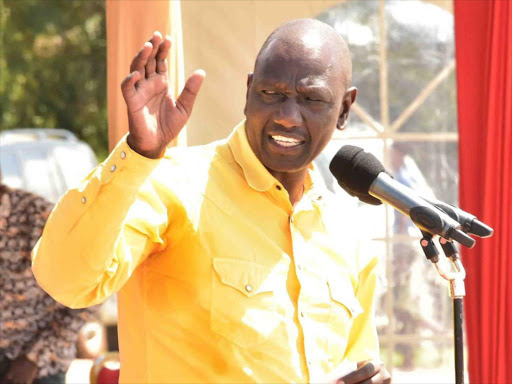 American essayist, poet and philosopher Ralph Waldo Emerson famously said, “When you strike at the king, you must kill him.”

Emerson was describing a metaphorical, not physical attack—but the implication renders the distinction one without a difference.

In other words, taking a physical swing at the king with the aim to injure him and missing is no different from engaging in any activity that’s intended to cause harm to the king, be it physical or otherwise.

While Deputy President William Ruto has not taken a physical swing at President Uhuru Kenyatta, an examination of his conduct and that of his minions since 2013 clearly provides ample evidence to conclude he has committed political sins against his boss.

They are not different from engaging in an activity intended to cause political harm to the king, in this case, President Kenyatta.

While the list of political sins Ruto has committed is long, I can raise several here without any fear of contradiction. They make a compelling case of why the challenges Ruto faces as he seeks the presidency are insurmountable.

First, while the President was indisputably asleep on the wheel following the 2013 elections — or oblivious to Ruto’s machinations —the DP immediately started to plan his succession gameplan.

Ruto, for example, maximised on the opportunity to rig in as many MPs as he could in 2017 to have enough numbers in Parliament to do anything he wanted or thwart anything they disagreed on with the President.

Ruto also made sure he had his major political opponents either rigged out or otherwise rendered politically impotent. If in doubt, ask one Martha Karua or Peter Kenneth.

This was a brilliant strategy, except it has backfired once the sleeping lion woke and is now making his presence felt.

Second, as part of his strategy to stuff Parliament and key government offices with his loyalists, Ruto cleverly used and continues to use the same politicians and foot soldiers to badmouth Uhuru, especially in the Mt Kenya region.

The instigation of badmouthing of Uhuru or keeping quiet as his allies do the dirty work is the very definition of taking a swing at the king.

Third, Ruto’s ramping up and now openly challenging or disagreeing with Uhuru on some of the issues the President is espousing such as the fight against corruption is nothing but insubordination. That can only compound his already impossible path to the presidency.

When Ruto challenged what is obviously Uhuru’s sanctioned leadership changes in the ruling Jubilee Party, he hammered down yet another nail on this quickly tightly shutting political coffin.

Fourth, the audacity with which he is publicly displaying insubordination is unmatched, and he is determined to beat the system that’s so clearly dead-set against him succeeding Uhuru.

Fifth is Ruto’s failure to recognise something Uhuru and many in the so-called system finally have come to admit:  That is we cannot continue like a ticking time-bomb set to rip the country apart into pieces every five years because of election woes.

That it is time power is wielded or at least meaningfully shared across the country, rather than having the presidency rotating between only two tribes when we have more than 40.

Any of these examples is a fatal political sin Ruto has committed but taken together, one can clearly see he has taken many swings at the king and missed with the only outcome being that he has nailed shut his political coffin.

Editors note: There is no evidence Deputy President William Ruto rigged in or out candidates in the 2017 elections