• Galmudug state has been engulfed in political bickering since president Haf termed a botched impeachment by lawmakers in September 2017 as “illegal”. 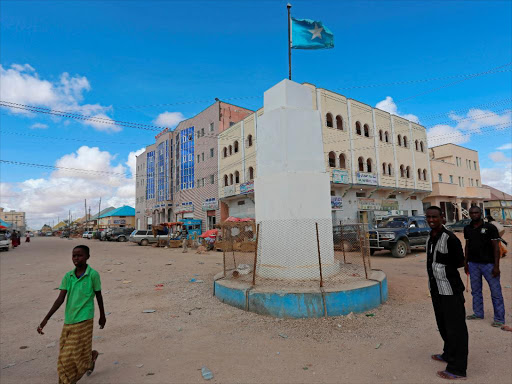 Residents stand near the Somalian national flag at a round about in Galkayo, a city divided between the semi-autonomous regions of Puntland and Galmudug, in central Somalia April 21, 2015.
Image: REUTERS

A bitter rivalry is simmering between the Somalia government and the opposition after several parties on Tuesday accused the national government of advancing its personal interests by usurping the powers and role of Galmudug State ahead of upcoming presidential elections.

The latest accusations by the five political parties came moments after President Mohamed Abdullahi Farmaajo officially accompanied by the outgoing Galmudug president Ahmed Duale Geele Haf, closed a two-week reconciliation conference in Dhusamareeb, Galmudug’s embattled government seat. It was attended mainly by elders and professionals to discuss the election and how to go about it.

Speaking during the closing ceremony of the first phase of the conference, President Farmaajo urged the people of Galmudug to unite and work together for the sake of peace and development.

He said the second phase will be electing new officials.

“Tonight we are all witnessing the fruits of our efforts with this reconciliation drive. The peace talks have now enabled us to move to the second phase, which is to select and build a strong administration for Galmudug," President Farmaajo said before dishing out certificates of appreciation to outgoing Galmudug President Haf, head of Galmudug administration Sheikh Mohamed Shakir Ali and Dr. Abdirahman Abdullahi Baadiyow, chairman of the Galmudud reconciliation conference for their roles in advancing reconciliation in Galmudug.

Galmudug State has been engulfed in political bickering since president Haf termed a botched impeachment by lawmakers in September 2017 as “illegal”. Since then, Galmudug has been in a state of political limbo largely blamed on the central government, which of late, has been busy replacing Federal States leaders seen as a threat to its plan to retain power in next year's polls.

Responding to an earlier communiqué after the end of the Galmudug reconciliation conference, which allegedly gave the Somalia Ministry of Interior powers to basically manage and oversee Galmudug elections, the opposition parties immediately cried foul.

"These issues and others highlighted in the communiqué clearly contravenes Somalia's Federal system, the constitution as well as that of the Galmudug state. They clearly stipulate that the Galmudug election is under the responsibility of the Federal State of Galmudug.'' the political parties said in their statement.

They argued that Galmudug is not a new Federal State. It has as constitution and a government in place whose time has only elapsed and hence the onus is on the people and government of Galmudug to manage their election.

Somalia is made up of five federal states names — Galmudud, Jubaland, SouthWest, HirShabele and Puntland State.

The government is yet to officially respond to the accusations.

Speaking to the BBC after the conference in Dhusamareeb, Dr Baadiyow, who chaired the government-led Galmudug reconciliation conference, said a lot had been agreed in the meeting, including how the next Galmudug administration would be formed.

“It was agreed that Galmudug should be reconstituted and that this conference would give recommendation and decisions reached. Those decisions have been taken, whatever else that needed to be agreed upon was placed into two pots. The first one is the upcoming meeting to elect members of parliament — questions have arisen about who is the genuine traditional elder and who is not? The second is the rift between various clans and we left that for the government that will be elected,” Baadiyow added.

The latest political rift comes barely a month following a much-disputed election in Jubaland state, where Ahmed Mohamed Islam aka Ahmed Madoobe defended his seat even though other parallel elections backed by Somalia government unilaterally elected other presidents in a bid to discredit Madoobe, whom the government accused of electing himself.

It seems this is exactly what opposition parties now fear in Galmudug. They fear if the Ministry of Interior takes charge of the election, then the government will likely determine who wins in Galmudug because they are likely to have their cronies elected parliament.

Presidents are elected by MPs and no wonder ordinary Galmudug residents have similar fears.

“If the Ministry of Interior manages our election, there is no question the committee elected to choose MPs will be pro-government and definitely they will also elect the pro-government candidate. What is the point of going into an election? The government should simply install their man and swear him in and spare us the bother and hopes of getting a president we deserve,” Abdi Hussein said on the phone from Dhusamareeb.

The Galmudug State presidential election is shaping up to be a two horse race pitting the ruling “Nabad iyo Nolol” – Peace and Development Party (PDP) of President Farmaajo said to be in favour of candidate Ahmed Abdi Kaariye “Qoor-qoor, and the Union for Peace and Development (UPD) party of immediate former President Hassan Sheikh Mohamud.  Their candidate is former Minister and now MP, Abdirahman Mohamed Hussein “Odoowa”.

The Somalia government has been very keen in ending the Galmudug political stalemate. Prime Minister Hassan Ali Kheyre literally camped there for over a month in August meeting various sides and clan chiefs in a bid to fast track the election process.

His opponents say he was simply there to campaign for the government candidate, Qoor-qoor.

The outcome is a huge blow to President Mohamed Farmaajo's re-election in 2020.
Siasa
2 years ago

All eyes on Jubaland State elections in Somalia

Battle lines have been drawn and daggers drawn as Ethiopia openly sides with the Somalia government.
Siasa
2 years ago

SOOMAL: Dispatches from a nomad: Bruising battle for South West State of Somalia