TO GIVE OR NOT TO GIVE?

Fears of church divisions over harambees

• DP Ruto has emerged as the face of harambees, donating huge cash in churches and public fundraisers in what has attracted sharp criticism 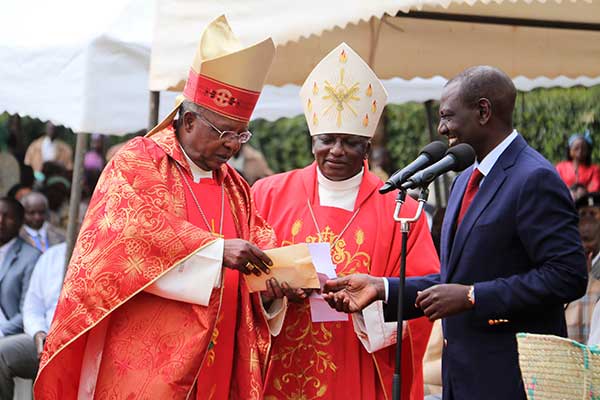 Sharp cracks have emerged among clerics over church harambees, exposing the soft-underbelly of dependence and patronage between politicians and the faith community.

The raging storm could as well reveal the faultlines between mainstream, evangelical and Pentecostal churches in the country.

The debate about whether or not churches should continue with "political"  harambees — which are now an established practice — threatens to put on trial long-held Christian beliefs and raises questions about the role of the church in public life.

The political undertones that have punctuated the discourse over harambees in sacred spaces pose a big headache for churches, with clerics finding themselves rocked by the conundrum.

The concern is not about harambees per se. Rather it is the suspicion that politicians are making donations from proceeds of corruption. The contention is that for the church to play a role in the fight against graft, it should reject money from dubious sources.

There are allegations that some of the clerics are bought by rich politicians through huge monetary enticements to sway their faithful in a certain political direction.

The forays made in different churches by politicians have sent worrying signals to the clerics of mainstream churches, who argue that harambees are being abused by politicians to seek votes.

The mainstream churches are grappling with how to kick out politicians from the pulpit with the Catholic Church, Anglican Church of Kenya and the National Council of Churches in Kenya stating that politicians and their money should be kept out of the pulpit.

However, it was the ACK’s move to slam brakes on harambees inside places of worship that has triggered a storm from both the men of God and politicians.

But in what has exposed the church’s dilemma, the ACK- the country’s second largest church by faithful- opened the window for fundraisers outside the sanctuaries.

"The bishops and Christians should hold fundraisers outside church buildings,"  ACK archbishop Jackson ole Sapit said on Tuesday at a press conference in Nairobi.

The remarks have sparked fierce reactions from clerics across the board in what has raised fears that the church could be headed for a major split over the fundraisers.

A section of the clergymen has vowed to continue receiving donations and gifts from the faithful as they have no capacity to determine the real source of money and other forms of gifts brought to the church.

Some of the churchmen have maintained that they will continue to host politicians in their churches without any reservations as much as they come to worship God.

Catholic Archbishop Philip Anyolo of Kisumu, whose inauguration a while ago generated some controversy after he was gifted a vehicle by Deputy President William Ruto, has defended the church.

He said the Catholic Church does not allow politicians or any suspected individual to give their ill-gotten money to the church.

“The Catholic Church does not condone corruption. We condemn any acts of corruption because it’s against God’s will,” Anyolo said.

“If you steal money or anything and bring it to the church you are already condemned and you have lost touch with God.” 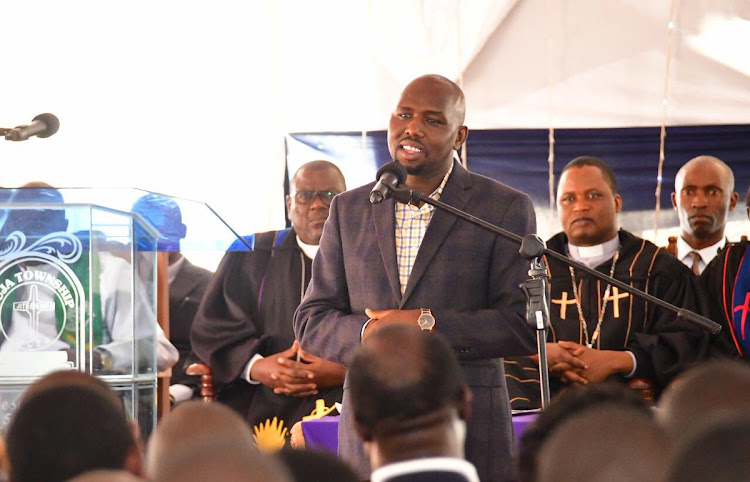 Auxiliary Catholic bishop of Nairobi David Kamau said, "I think we should go back to our senses and leave the church to the word of God. Recently, we had  the meeting of bishops and we passed a resolution that we don't allow politicians to interfere with our congregations and to bring politics in our churches."

"This is something we are working on, and I'd like our politicians to understand that we don't want to mix up the issues. Let's leave politics where it belongs, and the church where it belongs".

While the Anglican Church banned donations in the church — but allowed the same outside the sanctuaries — the National Council of Churches of Kenya waded into the thorny issue of harambees, saying they are integral in the church’s growth.

The umbrella organisation of Protestants said the church lacks the capacity to determine the proceeds of corruption so that they can ask the beneficiaries not to donate.

NCCK deputy general secretary Nelson Makanda said harambees have existed since the history of the church, though in various forms and continue to support church activities.

He says unless someone comes back to church and confesses having donated proceeds of corruption, it would be impossible for them to tell the source of such offerings.

"The concern should not be about the guests the churches are hosting but where they have got the money. That is the responsibility of the institutions dealing with graft," Makandia said.

He said the church encourages the faithful and guests to donate freely out of their will, quoting the Bible that "the left hand should not know what the right hand gives."

Makandia, however, cautioned churches against putting more emphasis on those faithful who walk to church with huge cash at the expense of the lowly in society.

“I wish to ask churches to allow people to give without declaring publicly. Because this has led to a concentration on those who give millions in one day and go at the expense of honest church members who give all the time," he said.

Bishop Mark Kariuki, the Overseer of the Deliverance Church, also said it is difficult to determine clean or dirty money.

"Media and politicians should stop politicising the offering. We like politicising everything in this country and that's the problem.  A pastor does not know where you got your money. If you came and told me you are giving this money as an offering and you stole it from Barclays Bank, I will tell you to go back with it," Bishop Kariuki told the Star on the phone.

"But if a thief stole and brought the money as an offering, that cash has no mark. I can't tell you to go back with it because you are a suspect," Kariuki added.

Equally, he said, were a prostitute to come and tell him the money she is offering is from the previous night's business, he would decline it. But if she gave an offering without saying the source, the cash doesn't scream it's from prostitution.

On the other hand, however, Fr Gabriel Dolan, who is also a Mombasa-based human rights defender and columnist, said the clergy has a duty to be suspicious.

Speaking to the Star on the phone, Dolan said where there are doubts about the source of the money, preachers should reject it, and "that's a judgment they should make".

"We have enough money in circulation for church development. We don't need politicians. Politicians want to be seen in churches and when you receive their money, they buy your silence, and can thus not hold them to account or question them. You are compromised," Dolan said.

He added that according to biblical teachings when you give, you ought to tive in silence. "There is no need for funfair".

The bishop warned that the ban was aimed at penalising Deputy President William Ruto, whom he said is a “generous giver to the church.”

“We know very well that Ruto has been targeted on the war on corruption with his generous contributions in church, and [Raila] Odinga is trying to coin the issue for his political gain,” Maina said.

“The church is not a house of saints. Demanding to know the source of money from any leader before contributing to church on claims of corruption is uncouth, foolish, unbiblical.”

And in what could further deepen the rift in the church, a section of bishops from  Murang’a have planned a mega rally for Ruto today (Saturday).

It is not clear if the DP will attend the rally but bishop Maina said Ruto had confirmed attendance at the event likely to be attended by a coterie of politicians allied to him.

Ruto has emerged as the face of modern harambees, donating huge cash in churches and public fundraisers in what has attracted sharp criticism from his political rivals, who have questioned the source of his money.

However, Ruto on Wednesday came out guns blazing, saying he will continue to worship his creator “both in soul and substance” in a veiled response to ACK archbishop Sapit.

“Since Sunday school we learned to kneel before and worship God that's the only reason we stand before men. We will continue to worship Jehovah with our hearts and substance. We are unashamed of our God and unapologetic of our faith. We are Christians first other title after,"he said in a post in his social media accounts.

Harambee has its origins from Kenya’s coastal Swahili-speaking people, who used the word ‘halambee’ to mean ‘Let us all pull together.’

After independence, harambee was used as a rallying cry by the first President Jomo Kenyatta to unite Kenyans for the hard work of forging an independent nation after the long and bloody struggle against the British colonial regime.

It expresses ideas of mutual assistance, joint effort, mutual social responsibility, community self-reliance and has been successfully used in funding or providing labour for building schools, hospitals and churches.

The country is littered with churches which have made use of the fundraising power of harambee to build projects and ministry programs.

But given that harambee has proven to be a good opportunity for politicians to be seen as being generous, a local harambee, even one sponsored by a church, will often attract a galaxy of invited politicians with wards of crisp notes to donate.

Eliud Kibii and Elizabeth Ngigi contributed to this report

Ole Sapit wants offerings to be given out quietly without announcing the amount.
News
3 years ago