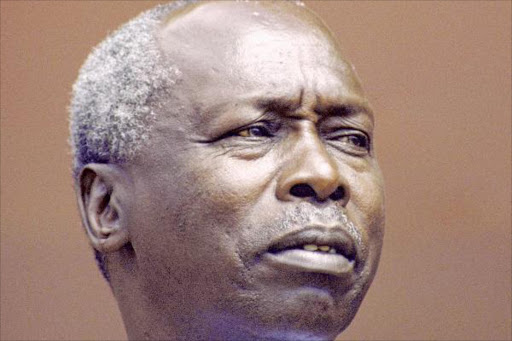 PROFESSOR OF POLITICS: Daniel arap Moi, during and after the presidency. ‘Moi’s forte is politics, not statecraft, and he would fare better in Kanu, a purely political machine, which is also not captured by Gema. Kenyatta’s men had organised politically around Gema, a civil society organisation, rather Kanu. At its prime in the 1970s, Gema membership roughly topped three million. Gema had captured the state to serve its interests, breaking its social compact with the rest of the nation.’

In his twilight years, Daniel Moi remains a powerful totem that continues to bewitch the imagination of Kenyans. Few dispute that he was a political genius, a dictator, very lucky, and an awful economic manager.

Whether he was the devil incarnate or the messiah that tried to break Gema hegemony is what is contested, often silence. Either way, his rule in the 1980s is a moment of insanity when a nation was entranced by a secular god and his profane religion, Nyayoism.

The Moi-god, Nyayo, was born of a compelling epic. With Ronald Ngala, he established Kadu in the 1960s as a coalition of small ethnic groups to counter Kanu, seen as a monstrous alliance of the populous Kikuyu and Luo.

Made Vice President in 1966, Moi would endure slights and humiliation from Kenyatta’s courtiers for 12 years, before rising to Presidency in 1978. He forgave his tormentors, and proposed to them a new milieu of peace, love and unity. Still, they would undermine him.

The 1982 coup is the significant moment when a cardinal sin is committed against the Moi-god. Charles Njonjo, who had been a favourite angel, had planned, but failed to destroy and supplant Nyayo.

Moi institutes a judicial process, the Njonjo Commission of Inquiry, to establish an offence, treason, but its real intent is to muddy Njonjo as a 'traitor’, before neutering him. The biblical undertone is deliberate. Njonjo is also the preeminent Kikuyu prince, and a proxy for Gema hegemony.

Their common formula was simple – a personality cult, an authoritarian regime, and brutal treatment to disloyalty. It provides the mould for Moi’s self-recreation as an all-powerful, omnipresent and jealous god that would save his faithful from Gema hegemony.

He calls an election a year earlier, wins a vote of confidence, which he deliberately misreads as a mandate to dismantle Gema’s economic and political hegemony. He then opens a multi-pronged assault on Gema.

The first defensive front is to revive Kanu. Moi’s forte is politics, not statecraft, and he would fare better in Kanu, a purely political machine, which is also not captured by Gema. Kenyatta’s men had organised politically around Gema, a civil society organisation, rather Kanu.

At its prime in the 1970s, Gema membership roughly topped three million. Gema had captured the state to serve its interests, breaking its social compact with the rest of the nation.

Moi response is an aggressive and mandatory Kanu membership registration drive, raising the party’s membership from a few thousands in 1978 to more than eight million in the mid-1980s.

A constitutional amendment to make Kenya a de jure one-party state earlier in 1982 protects Kanu from competition as it balloons into a colossus. The political question of who gets what, how and when is henceforth resolved within Kanu.

The state merely implements the party’s agenda. This is the new covenant between the Moi-god and its subjects; loyalty to Nyayo and Kanu begets development. It found a new secular religion, Nyayoism.

The second front is building a Nyayoist state. At heart a federalist, the centrist state is nevertheless expedient to underwrite Moi’s grip on power and drive his political agenda. Security institutions are essential to his plan.

He excises the armed forces, intelligence and the provincial administration from the bureaucratic chain-of-command and brings them under his direct control. He builds personalised relationships with key administrators and security officers who report directly to him. At the head of these institutions is an intellectually humble zealot, Hezekiah Oyugi.

Moi’s development policy is federalist. The District Focus for Rural Development brings it all together. He layers this with a spirited Harambee drive to raise money to build district headquarters and Nyayo wards in the country’s 41 districts. The provincial administration is appropriated to deliver decentralised economic development.

These are Nyayo bishops in the provinces. Nyayo neither discriminates against gentiles, or Jews. Kalenjins include Henry Kosgey, Jonathan Ng'eno, Sally Kosgey, Bethuel Kiplagat and Benjamin Kipkor

Kanu rank and file is packed with priests, while its youth wing chokes with the religion’s catechists. Simeon Nyachae, a man of modest education, sits at the top of the civil service as the de facto prime minister. Only Nicholas Biwott, who holds an MA in economics and boasts over 20-year experience in senior government roles is more preeminent.

The third front is dismantling Gema economic hegemony. Kenyatta had done little to change the colonial economy but to preside over the replacement of the colonial elite with his own.

In the 1980s, economic production was still concentrated in White Highlands, a green belt straddling Central and the Rift Valley provinces, where Gema held sway over its cash-crop economy. Moi left it to the ravaging vagaries of the international market.

But against the banking sector, Moi is in full offensive. He withdraws parastatal accounts from Kikuyu-owned banks and micro-finance institutions that flourished under Kenyatta. Weaned of state support, they collapse in succession between 1984 and 1986. His onslaught continues, shoving Kenyatta’s men out of parastatals and replacing them with his own. The point is vengeance, for Nyayo is a jealous god.

Unravelling the Kikuyu capitalist class leaves him with few options but to court Indian capitalists. They are good allies. They have no political ambitions and have beef with Kikuyus. They had been scalded by the Africanisation policy in the 1960s, which favoured Kikuyu merchants at their expense.

The fourth front is to bring the bacon home to Rift Valley. His credibility is in question here for his acquiescence to Kenyatta’s resettlement of Kikuyus in the region. He redeems himself by rolling out an unprecedented development plan.

Eldoret town, a sleepy, dusty, but sizable hamlet established in 1912 by Afrikaner refugees from the Anglo-Boer war in South Africa, is the epicentre of the region’s economy. Moi’s most iconic projects, the Sh8 billion Turkwell Dam, Moi University, the only Kenyan university built from scratch – the Moi Teacher’s Training College, Moi Barracks and later the Sh4 billion Moi international Airport, Moi Teaching and Referral and a low-profile bullet factory – are all located in the town’s environs. Eldoret swings into a long-term growth trajectory and is today Kenya’s fastest growing town.

Outside Uasin Gishu, Moi rolls out less spectacular but significant development projects including grain storage facilities in Kitale and Nyayo tea zones in Nandi and Kericho areas. He builds from scratch or upgrades existing schools in the region at a record scale.

Kabarak High School is Moi’s king project. The free school milk programme, supposedly born of Nyayo’s generosity, is in fact aimed at raising primary school attendance in arid pastoralist areas. Its cost grows from Sh169 million in 1978 to Sh600 million in 1988, or 20 per cent of the education budget.

The fifth front is a war against ideas. Here, the Moi-god is most menacing. Through his three-word (non) philosophy, which made him sound like bad copy of deputy Jesus, development is substituted with politics. All ideas are perfunctory. It is madness with a method nonetheless.

The Luo coup-makers of 1982 suffer from the same heresy as many of their insurgent counterparts across the 1980s Africa – socialism. Academics, public intellectuals, journalists, writers, clergy and other peddlers of ideas are its vectors. They must be fumigated, quarantined, destroyed or banished.

The unlucky are physically neutralised or detained without trial in bestial and unsanitary dungeons, naked, starved and losing their minds. Their lot conjures the biblical Nebuchadnezzar. The heresy would incubate before breaking out into a democratic epidemic. The tipping point is 1990, where heretic population surpasses the Nyayo faithfuls.

The last front is the performance of Nyayo’s power. It is a fraud. It needs ritual to prop it up. Public events become a praise and worship affair, complete with secular hymns that proclaim the wisdom, courage and legitimacy of Nyayo’s rule. He is exalted – Nyayo wapi? Juu juu juu kabisa!! Speeches are tedious, long and mind-mashing. The nation transitions from a political to a pentecostal milleau.

Madness itself is when Nyayo visits your village. Big, black, flying ‘escort’ cars breeze through rough dirt roads, sending free-range children and chicken flying. Stones are white-washed and the ugly black, red and green Kanu pedants hang from any post in sight.

The local notables are dressed in their Christmas clothes, and the provincial administrators in their full colonial regalia. Then Nyayo, in his full glory sticks out of the god-mobile’s sun roof, septre up, red shirt chocking his neck and a few paternalist words to the faithful. Only the mad man in the market notices his common predicament with Nyayo.

In 1991, against his guts, Moi repeals Section 2A of the constitution. The nation broke from its reverie, and slowly democracy staggered in. Stunned, we did not know what to do with democracy. Do we now?