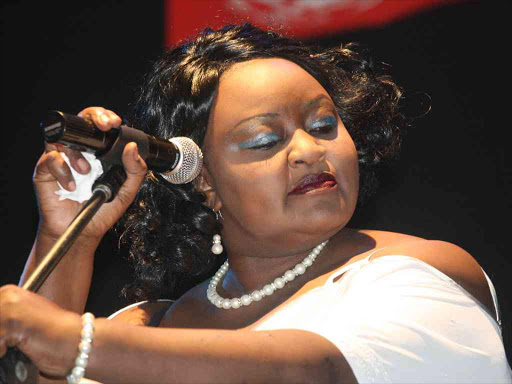 The late veteran Kenyan Afro-fusion singer Achieng Abura's son Prince has been sick for a very long time having been diagnosed with Sickle Cell Anemia at birth.

About five years ago, the situation got complicated when he was diagnosed with a chronic heart disorder that has kept him in crises and is now affecting other organs.

Before his mother died at the Kenyatta National Hospital on October 20 this year, she had started a fund drive to raise money for him.

She then got some assistance from a facility in London to treat him at almost no cost as the operation would be an expensive affair.

The funds that were being raised were meant to carter for other costs such as the airlift and recuperation requirements.

But after her death, Prince has had a number of complications, that have resulted in him being admitted at the Aga Khan Hospital.

Well, new reports state that two hospitals in UK have declined to admit him because he is not covered by National Health Services.

The fundraiser chairperson of Prince's M-Changa account disclosed the info stating, "Prince was discharged the day before his mother was laid to rest and traveled to Songhor for the funeral.

"After a procedure done at Aga Khan hospital a few days before, he has since stabilised and has been eating and sleeping well and regaining his strength.

"In the meantime, Lucie has been to the UK and been in contact with the two hospitals we were referred to by Achieng. Unfortunately it seems they will not admit Prince unless he is covered by the NHS (National Health Service) which could only happen if Prince was enrolled in college there.

"The cost of seeking Sickle Cell treatment without this coverage is beyond us."

With this, another alternative had to be found.

"We immediately set about looking for alternatives and have been in touch with the Indian High Commission to see if they have any leads that can assist us pursue treatment in India.

"Last Saturday we had a fruitful meeting with Princes family to deliberate on the way forward and will meet again later this month and they are also helping guide us on what's best for him.

"His Doctor in Nairobi Dr Riyat is also assisting to see if we can find an institution in India that can treat his condition. We wish to emphasise that there is managing his condition which can be done in Nairobi (even though it may be better managed abroad) and treatment which will mean he will be free of the debilitating conditions of sickle cell and able to lead a full and productive life.

"The latter is what we are seeking to do. We do also have a contact in America who is pursuing a few institutions there that specialize in Sickle Cell treatment."