• Sightseeing at the park presents a pleasant surprise 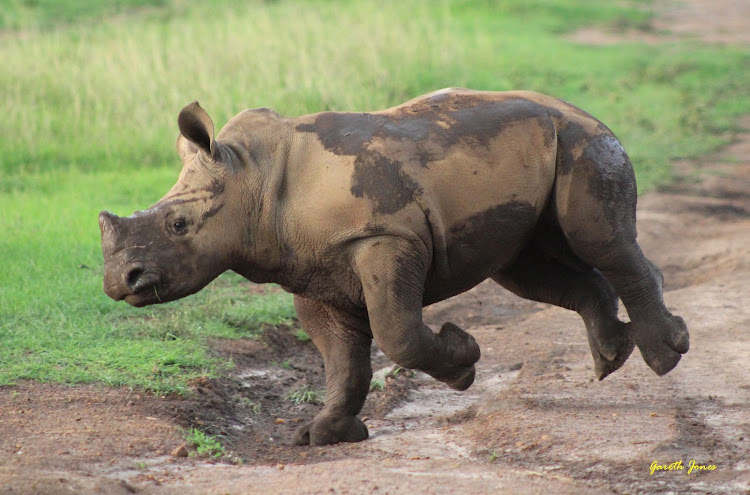 As I drove through the park late one afternoon, I noticed some movement in the small stream “lugga” in a valley. It was a white rhino with a small calf enjoying a wonderful mudbath.

The little baby almost comically copied his mother by rolling in the mud with all four legs in the air. I sat for some time, watching them as they peacefully bathed in the mud.

As I sat quietly, they approached quite quickly as their muddy wet bodies glistened in the late afternoon sunlight. Then as if “mum” said “Go play now!” the little one started playing.

No doubt the cool fresh air and the muddy moments appeared to stimulate the baby rhino to seemingly have endless energy. The baby began to run and run and run, all around “mom’ almost as if the legs had only just realised they could…. run!

As I watched, I silently cheered in my mind “Fun, baby! Run!” The enthusiasm of the tiny baby was such that even “mum” seemed to forget that she was an adult for a short time, as she joined in the fun.

It was indeed a rare and wonderful moment to observe and feel the free and wild mood of the white rhinos. I contrasted this special moment with the sober reality of the cruel world we live in. How could any sane minded person want to slaughter such gentle giants?

I hope and pray that future generations will have the awesome privilege to observe rhinos in the wild, and maybe also enjoy watching a “baby fun run” moment.

For more information on the park you can link to the following website: www.kws.go.ke

Post a comment
WATCH: The latest videos from the Star
by Gareth Jones Nature Writer
Travel
18 February 2022 - 03:00
Read The E-Paper