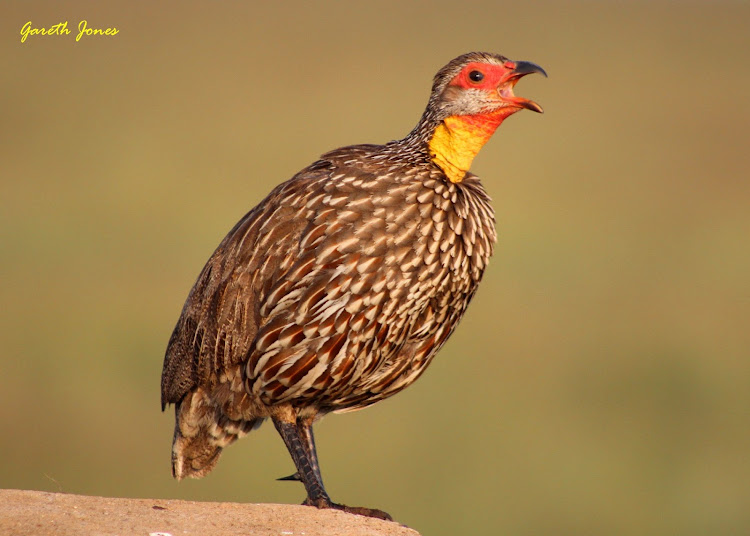 Lyn waited patiently as a new day dawned. It had been a very lonely night as Frank did not come home. Lyn became increasingly concerned at sunrise, and she began to search the area where she last saw him, and began to call out repeatedly in the hope that he would respond, “Kreaak…Kreaak… Kreaak.”

Wow, what a joyful moment of reunion. Lyn ran to be with Frank, she really seemed to be in a bit of a flap, and immediately asked him why he didn’t return the previous night. Frank then told her a scary story of how he very nearly become a Serval cats dinner.

Frank and Lyn were both relieved to once again be together, to face another day in the unpredictable bushveld. Their experience of surviving various predator encounters had drawn them closer together.

It is always good to imagine what sort of life some creatures like Francolins might be living. The name “Frank & Lyn” kind of sounds like the names of a happily married couple.

This species is named for the yellow patch found on its neck. Males of this species have been noted to have spurs on the back of their legs, that they use for fighting. Usually in pairs or small groups. It has been noted that yellow-necked francolins are most active at dawn and dusk.

Next time you are in the wild and you see a pair of yellow-necked francolin, just think of “Frank and Lyn”.