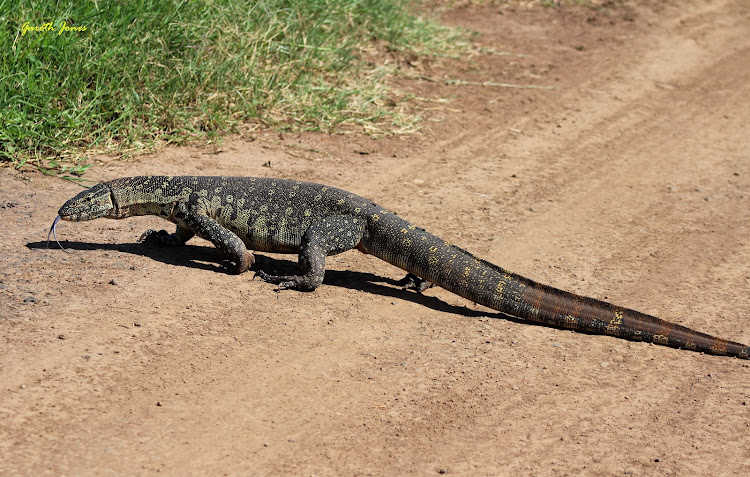 After a cold day, the sun finally came out giving some warmth. I drove down towards the Hyena dam, and I saw a fairly large monitor lizard, sunning itself on the side of the dam. It lay perfectly still, looking relaxed. The monitor turned its head slowly and looked around, with its tongue flickering in and out. After a while, it must have determined that I was not a threat, and moved away into the reeds.

Wow! It is not every day that you see such a sighting, they are not often seen. They prefer to frequent aquatic areas like rivers and dams with plenty of bush and reed cover. The species of monitor found in Kenya and many parts of Africa is called the Nile Monitor (varanus niloticus), interestingly they are the longest lizard species in Africa.

Nile monitors feed on fish, snails, frogs, crocodile eggs and young, snakes, birds, small mammals, large insects and carrion. To me their most fascinating and amazing feature is their extra sense of smell, To do this they use their long forked tongue, and the reason it flickers in and out is so that the Lizard can “smell” the air.

Monitor lizards, like snakes, have a pair of sensory organs located above the roof of the mouth called the Jacobson’s organs. The organs are used to detect scent particles within the air. These lizards continuously flick their forked tongues to collect these particles and to ‘taste’ the air; this extra sense is used mainly for hunting as monitor lizards are very active predators and are almost constantly foraging around for food.

During the breeding season, it is also used to help these usually solitary reptiles find a mate; the male will use his tongue to follow the scent of a female.

Watch out for these long lizard reptiles next time you visit the Nairobi park!

For more information you can link to the following website www.kws.go.ke