Their ties are somewhere between mutualism and parasitism 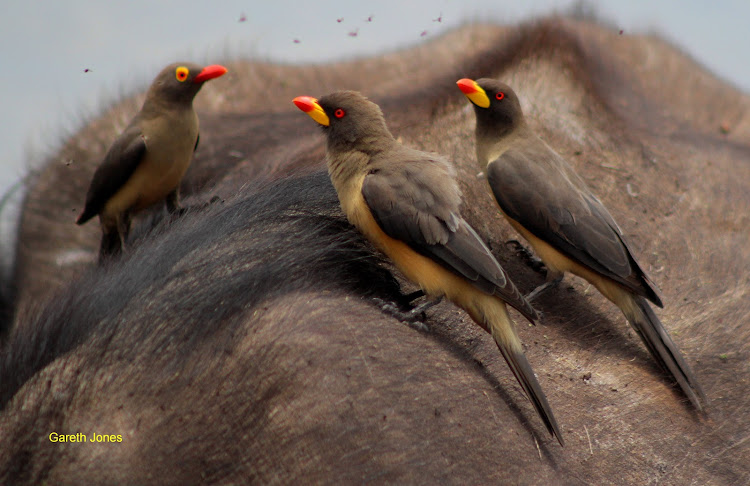 We observed a large herd of buffalo drinking water and wallowing at the Embakasi dam. However, I was fascinated by the presence of many of red-billed and yellow-billed oxpeckers.

As we sat quietly the oxpeckers moved all over the buffalo bodies looking for delicious parasitic snacks like ticks and lice. Ticks (suborder Ixodida) are parasitic arachnids that are part of the superorder Parasitiformes.

Along with mites, they constitute the subclass AcarI. Ticks are therefore not actually insects and are more closely related to spiders. Ticks are major disease-carrying pests particularly in many parts of Africa. There are two main groups of ticks, namely h the Ixodidae or hard ticks, and the Argasidae, or soft ticks.

A close ecological relationship involving two or more species that can benefit all parties is known as symbiotic mutualism. It can also benefit one party without affecting the others this is called commensalism or help one while harming the others called parasitism.

Red-billed and yellow-billed oxpeckers have long been thought to remove ticks from their hosts, to the benefit of both—the bird eats the ticks, and the host is relieved of blood-sucking, disease-carrying parasites. However, oxpeckers can also aggressively bore into wounds on animals to access blood.

A secondary benefit to a host from the tick-bird's presence is a sort of early warning system, since the birds make a hissing sound if they sight an enemy. This is of less benefit to the buffalo than to other hosts if the buffalo are in a large protective herd.

Next time you are in the park, look out for species that have interesting natural symbiotic relationships. If possible find a herd of buffalo and sit quietly as you watch the pests being removed by the peckers.

For more information link to the following website www.kws.go.ke