The camp under the AGCCI phase II will be held in Mbeya, Tanzania 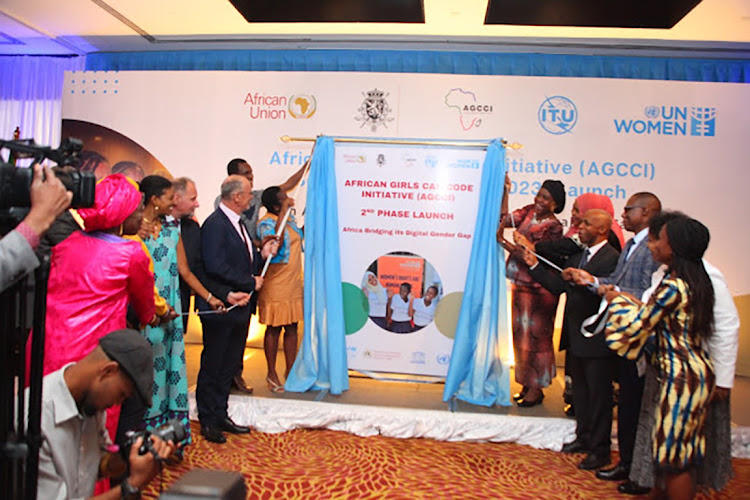 Stakeholders during the launch of the 2nd Phase of the African Girls Can Code Initiative (AGCCI) in Dar es Salaam
Image: COURTESY

The UN Women Tanzania has launched a call for applications to qualified girls to participate in the first coding camp to be held in Mbeya, Tanzania.

The coding camp under the African Girls Can Code (AGCCI) Initiative Phase II will run from February 27 to March 10.

The coding camps are coordinated in close collaboration with United Republic of Tanzania (Mainland and Zanzibar).

In 2022, UN Women and the African Union Commission launched the second phase of the AGCCI in Dar es Salaam, Tanzania.

This was in collaboration with the International Telecommunication Union, UNESCO, UNECA, and Unicef

The first phase of AGCCI which was implemented from 2018-2021 built the knowledge and skill of over 600 young girls from 32 member states, empowering them to pursue education and innovation in ICT.

The programme aims to empower and equip 2,000 African women and girls between ages 17-25 with digital literacy skills over four years, putting them on track for careers in the ICT sector.

According to statistics, globally, women make up 28.4 per cent of the workforce engaged in STEM and only 30 per cent on average in sub-Saharan Africa.

This is according to the Global Mobile Communication Mobility Gap Report 2019.

In Africa, the proportion of women using the internet is 24 per cent compared to 35 per cent of men.

The UN Women through a statement said that the lower levels of ownership and use of mobile devices by women not only reflect existing gender inequalities but also threaten to exacerbate them.

“If the gender gap is not closed, women risk being left behind as societies and economies become more digital,” the statement read.

It also said that affordability, literacy, patriarchy and digital skills, perceived lack of relevance, and safety as well as security concerns are the most common barriers to women's access to and use of mobile internet.

In the second phase, funded by the government of Belgium, the AGCCI aims to build on previous success to support two-week coding camps in 11 countries.

Over 1000 girls are expected to benefit.

It becomes the first Private School in Kenya to comprehensively implement such a coding curriculum.
News
3 weeks ago
Post a comment
WATCH: The latest videos from the Star
by MELINDA KIRWA
Technology
13 January 2023 - 12:20
Read The E-Paper