WhatsApp to show past participants of groupchats

They plan to roll out the feature on Android, iOS, and WhatsApp beta versions soon.

•WhatsApp says past participants will be removed from the list after 60 days.

•Currently, it is also working on the ability to silently leave groups without notifying other participants. 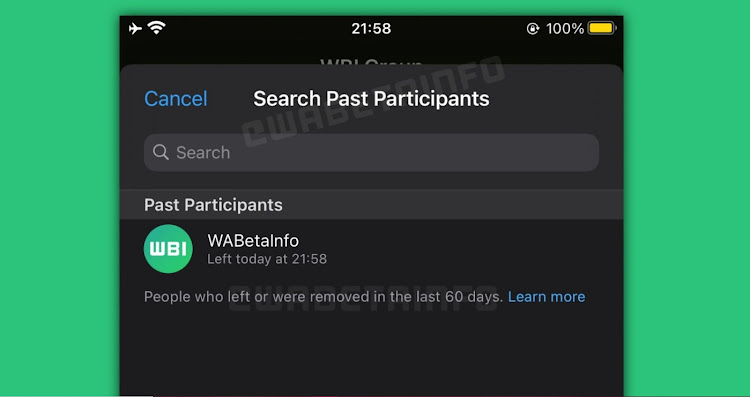 WhatsApp has announced that it is working on a feature that will let users see the previous and current members of groupchats.

All group members will be able to view who left the group in the past 60 days, by opening a new section that will be available right within group info.

WhatsApp says past participants will be removed from the list after 60 days.

“Thanks to this new option, it will be easier to keep track of who left a WhatsApp group. Unfortunately, it seems that this list will be visible to everyone in the group, not only to group admins,” WABetaInfo reported.

WhatsApp says the feature is still under development, and the way the feature works may change before the release.

They plan to roll it out on Android, iOS, and WhatsApp beta versions soon.

Currently, it is also working on the ability to silently leave groups without notifying other group participants with the exception of admins.

It now says that with the new feature, all group members will still be able to see who leaves the group by using a feature called “past participants”.

The release date of the feature is yet to be confirmed.

Currently, there is no way of storing messages in disappearing chats.
News
3 weeks ago

Our pets are capable of recognising emotions shown by certain facial expressions.
Sasa
3 weeks ago

The classification follows a worldwide upsurge in cases all over the world.
Sasa
3 weeks ago

Sex, wearing tight inner-wear; hygiene mistakes you are making on your period

Practices that put you at risk of infection and bacteria breeding during your period.
Sasa
3 weeks ago

Ideally, a three or four-minute shower with a focus on the armpits and groin is adequate.
Sasa
3 weeks ago

Easy Sunday brunch: How to prepare beef and minji stew

Cooking a proper beef stew for your family and friends is such a good way to bond over good food.
Sasa
3 weeks ago

WhatsApp: How to hide 'you viewed status' from your contacts

You must be ready to sacrifice who viewed your status. But there is a trick.
Sasa
1 month ago

The feature is still under development and may roll out soon.
Sasa
1 month ago

Make sure your new phone number can receive SMS or phone calls and has an active cellular connection.
Sasa
1 month ago

Users can also send messages to specific people while on a group call.
Sasa
1 month ago

Earlier, users could transfer contacts, messages, and calendars but not WhatsApp.
Sasa
2 months ago

WhatsApp lets users add up to 512 participants in a group

The feature has been released today and will be rolled out within the next 24 hours.
Sasa
2 months ago

It will available on WhatsApp for iOS, as well as the app's desktop version first.
Sasa
2 months ago