Qatar are hands down the best World Cup hosts

• From overnight sensations to historic wins, the Fifa fiesta has changed many lives Dancers perform during the opening ceremony before the Group A match between Qatar and Ecuador at the 2022 FIFA World Cup at Al Bayt Stadium in Al Khor
Image: XINHUA

One cannot deny that this has been the best World Cup we have seen in our lifetime! The games have been too tight to call, the stories from fans who visited Qatar have been inspiring and most importantly, the propaganda fuelled by the West has failed.

There have been no reported incidents or criminal activity. We can be almost certain there aren't any because if there were, the Western media would gobble up anything just to spite the peace in the Middle East.

Other than the sport we watch on live TV or news from the host city, which also happens to be the hometown of the biggest media organisation from the Middle East, Al-Jazeera, there is a lot of on-the-ground information being shared on social media.

Most Westerners are experiencing this kind of culture for the first time in their lives. I say Westerners because Africans, Asians and generally people from the East share cultural denominators.

This particular World Cup has shown us how the world has changed. How, in the blink of an eye, a person’s life can be changed overnight. So is the story of Metro Man, a Kenyan who works in Qatar. Metro Man’s job is to direct visitors to the nearest metro station, so he yells in his megaphone “Metro… this way!” Just that and… boom! The man goes viral on TikTok and becomes one of the most-known figures of the World Cup. 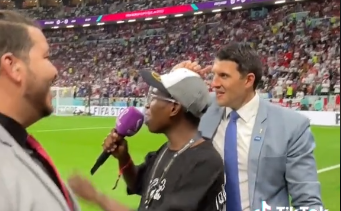 A young Qatari boy who went to watch the opening match of Qatar and Ecuador became an overnight sensation in China as a photo of him visibly upset from his country’s loss went viral. And just like that, the young man was the most famous person in the most populated country on earth.

To the old souls like myself who do not understand the importance of going viral in today’s culture, know this we live in the era of 15 minutes of fame, where pseudo-celebrity is the norm. A social media celebrity is more powerful than an actual celebrity from Hollywood. They control the masses with their huge following and social media reach. If the Metro Man and the “Qatari Prince” play their cards right, they can be among the top-most-followed people on social media.

As the World Cup comes to a close this weekend, think of all the extraordinary things that have come from the ordinary. How ordinary people became huge overnight sensations, how a small dry country in the Middle East wowed all the foreigners with its futuristic advancements, and how a small African country that has never gotten far in the World Cup beat the team with one of the best footballers of all time! What a way to make history, Morocco.

Whoever wins the 2022 World Cup is not the only winner out of this global event. Everyone who made the event a success is an MVP. All the people who fully immersed themselves in the culture while respecting the law of the country are the reason why this World Cup is one of the best events of the decade.