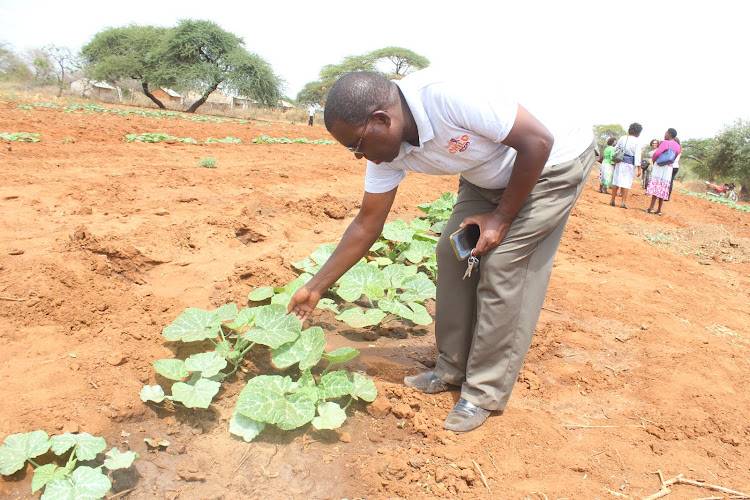 Alphonse Mbithi, a veteran local radio reporter, has ventured into pumpkin farming, a way of preparing for his retirement.

We toured his farm in Machakos county and found the 53-year-old taking round farmers from Meru, Embu and Thika, who had come for benchmarking.

Mbithi said it is his first time engaging in this type of farming as he has previously planted watermelons.

"A friend enticed me into this kind of farming and I found it cheaper than water mellons," he said at the farm in Thatha village, Kivaa ward of Masinga subcounty.

He uses manure (cow dung) instead of fertiliser, waters his crops twice a week and buys insecticides once he notices a change in the plants.

Farming is easier for him as he pumps water from a nearby earth dam that was sunk by the national government in 1986.

"This dam has been so pivotal to us as it never dries up," he said.

He is expected to harvest in two months.

"This type of farming takes only three months," he said.

He said the pumpkins are dried and processed, where the flour is used by people with different health conditions, such as diabetes.

He urged political leaders to ensure earth dams are sunk in most parts of Ukambani region to address famine and drought through farming.

"Ukambani is well known for its harsh climatic conditions, but with water, drought would be history," he said.

Irene Mwendandu, a farmer based in Embu who had come for benchmarking, said what motivated her is that one acre of pumpkins can yield up to a million shillings.

Mwendandu called on youths to embark on farming to address unemployment.

"As we all know, our country has very high unemployment rates, with the most affected ones being the youths. Farming can create employment because people will always eat," she said.

Farms lie idle as youth go to seek casual jobs
Post a comment
WATCH: The latest videos from the Star
by LINAH MUSANGI None
Lifestyle
02 September 2022 - 04:00
Read The E-Paper