They print posters, T-shirts on credit only to leave you hanging after polls

• One is left with promises of tenders and CDF projects despite practical, legal issues 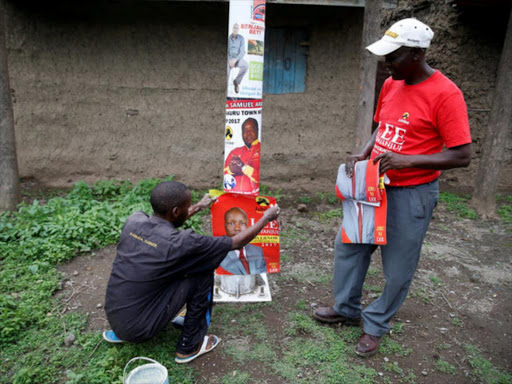 A man glues a campaign poster of a candidate for the local elections to a pole in the Barut ward, Nakuru, on July 27, 2017
Image: REUTERS

During the 2007 elections, George Otieno got connected to a big-name politician from his rural area. The politician wanted campaign posters and branded T-shirts. Otieno, who runs a printing business, thought he had struck the jackpot.

With the politician being a prominent national figure, payment would be no problem. At least that's what Otieno expected. He hurriedly executed the politician's order, hoping to impress the personality into bringing more business. Otieno delivered the goods, but the politician gave nothing but empty promises of payment.

“It was an important lesson in dealing with politicians,” Otieno recalls. “I know of many businesspeople claiming money for goods and services delivered to political aspirants.”

Politicians are known for their sweet tongues when seeking votes. This year is no different as we head towards the August 9 elections. Their powers of persuasion are not only directed at voters but at suppliers and financiers, too.

Are we hooked on the soap opera that is Kenyan politics?

People often get mesmerised when called to the home or office of famous political personalities to discuss business. Imagine sitting face to face with someone you regularly see on TV or in the newspapers. It’s that effect that gets less experienced entrepreneurs to believe that all prominent personalities are rich.

Politicians know how to exude affluence. Many of them live in posh homes but have not paid rent for several months. They drive luxury cars whose loan payments are long overdue. While meeting such a person, he or she is likely to talk on the phone with some other big shot in your presence. It's all drama meant to deceive the gullible.

Some politicians gunning for offices that control big spending budgets, such as governor and MP, are known to make unrealistic promises to campaign suppliers. Governor aspirants tend to entice supporters with promises of county government tenders.

The aspirants knowingly or unknowingly fail to mention that tenders are subject to a procurement process involving many competing bids.

MP aspirants will pledge to allocate National Government Constituency Development Fund (NG-CDF) projects to businesses demanding money for campaign materials. NG-CDF projects are run by committees and an MP may not have much say in awarding tenders.

Besides, even if a politician somehow manipulates the procurement system in your favour after winning office, there's a very strong likelihood you could someday be charged with participating in a corruption scandal.

The reality is that most aspirants in the forthcoming election will lose. They will have neither the opportunity nor the money to pay for goods taken on credit during the campaign period. Even those politicians lucky enough to get into office will not be easily accessible after the elections.

After getting his fingers burnt back in 2007, Otieno started insisting on upfront payments before delivering campaign material for politicians. “I would rather stay without business than risk printing for politicians who might refuse to pay,” Otieno says.