They don't work unless there are shared values and principles

• Having burnt their fingers in 'arrangements of expediency', parties are now cautious 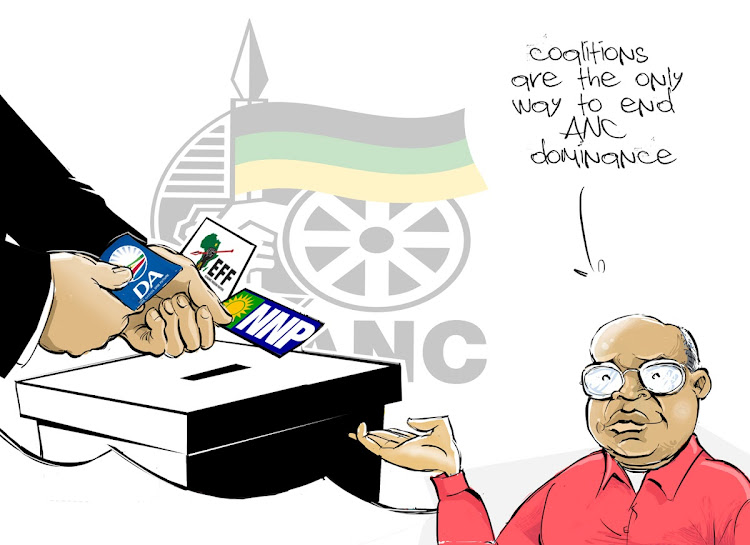 It is said that when doctors and police seem to grow younger, you are getting older.

Cape Town has just elected a 34-year-old as its youngest mayor since democracy in 1994. And being nearly 20 years older than him, I feel positively ancient.

The local government election here is done and dusted and the results have given the major parties a lot to think about.

The IEC reports that 325 of these contested this year's elections along with a good number of independent candidates.

The vast majority of these small parties do not enjoy representation in Parliament and were seeking to gain the trust of communities for the first time in their different wards.

Some already had a foothold among voters and used the opportunity to grow their support.

For instance, in the Western Cape, where I am based, the local government elections showed strong growth for secessionist parties and a clear political shift away from parties which favour a strong central government.

Support for parties which have formally adopted secessionist policies increased from 0.1 per cent in 2016, when the previous local government election was held, to 5.4 per cent this year.

Meanwhile, the historically low turnout of these elections didn't help matters much.

Among the big parties that now have to put on their thinking caps as they strategise for the general election in 2024 is the ANC, which got below 50 per cent nationally for the first time.

In the City of Cape Town, the ANC’s electoral support was reduced to a mere 18.6 per cent, which means they lost 14 council seats.

The main opposition Democratic Alliance, or DA, also did poorly nationally as well as in their strongholds of the Western Cape.

There are 30 municipalities, including the City of Cape Town, in the Western Cape.

The DA may still run the province and many of the municipalities, but they received a bloody nose from the voters, losing control of its majority in 15 municipalities that it won in 2016.

What this means is that in many municipalities, coalitions are going to have to be the order of the day.

As Kenyans, we know how tricky coalitions can be, and that's also an understatement.

Having burnt their fingers in coalitions that were stitched together hurriedly in municipalities across the Cape over the last five years, the ANC, DA and others are being cautious this time around.

They are done with what one politician I spoke to termed "arrangements of expediency".

Instead, they have hit on the idea of asking potential partners in any coalition to sign formal legal contracts negotiated by party leaders and not by individual councillors in smoke-filled backrooms in some small, remote town.

It is hoped that such contracts will ensure that stable arrangements are produced.

This will be an interesting development in South Africa's democracy project as it will be the first time that such systematic, structured agreements are negotiated at municipal level.

Could this be the way to keep each side accountable?

Will the threat of legal action for breach of contract be enough to stop the political bed-hopping that has characterised municipal coalitions so far?

I guess only time will tell.

But it did get me thinking about next year's elections in Kenya and the possibility of a close result.

We've been down this road before and while it wasn't completely satisfactory, it was probably the best we could manage in the circumstances.

That said, there is so much bad blood between the assumed leading contestants, who come with untidy baggage (another understatement), that it may be impossible.

An expert I spoke to told me that coalitions won't work unless there are some aspects in place first.

For instance, parties to the agreement must agree on shared values and principles to guide their coalition arrangement.

After agreeing on the coalitions arrangement, parties involved must agree on workable plans and programmes, short-term, medium-term and long-term.