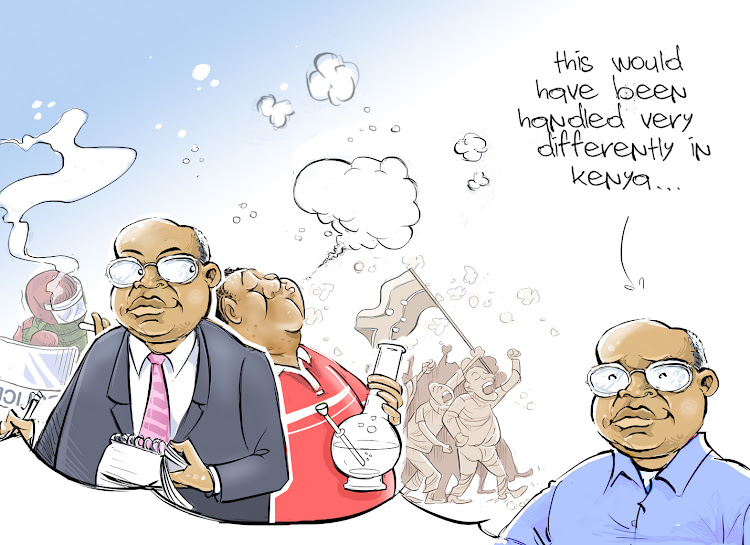 Being from Kenya and living in South Africa, I often catch myself making comparisons about the two countries, which I have come to find have more things in common than they have differences.

The people of both countries can be loud and opinionated, even if not at the same volume as our brothers and sisters from Nigeria.

We tend to think very highly of ourselves, though perhaps we are not quite in the same league as Ethiopians.

And then there's this point put across in a newspaper opinion piece by South African political activist, researcher-writer and lecturer back in March 2010.

Dale McKinley wrote: “As much as those of us who identify ourselves as social progressives would like to believe otherwise, the reality is that South Africa is a bastion of social conservatism.

“Indeed, one of the most glaring contradictions of South Africa’s post-apartheid ‘transition’ is that the widely acknowledged (and regularly celebrated) social progressiveness of the Constitution is, in large part, at fundamental odds with the beliefs and views of the majority of South Africans themselves.”

I honestly believe you could replace South Africa with Kenya in that quote.

As for the bit about the “post-apartheid transition”, in Kenya’s case, as far as I am concerned, it would be from the post-Kanu years from around December 30, 2002, though I can see why others might argue for August 27, 2010.

Then there’s the economy. South Africa may have a bigger one than Kenya’s, but when it comes to ease of doing business, Kenya wins hands down.

It’s a little late in the day, but I must alert you to my disclaimer here. I am neither an economist nor a social scientist, and these are just my unscientific and unmeasured observations.

However, this past week, I saw differences that stood out a mile. The first was in regard to energy.

While South Africa has not yet put in place the required policies and regulations, trade agreements and infrastructure needed to ensure it is able to use natural gas, I read a report that said: “Already a global leader in clean energy, Kenya plans to mothball or convert its oil-fired power plants to cleaner liquefied natural gas by 2030.”

Then there was the issue of cannabis and, for the purposes of this article, I’ll tack on the attitude of government ministers to public protests.

In Kenya, it is rare for protestors to get a chance to face off with a Cabinet Secretary or any senior government official. In South Africa, things tend to be different.

Let me explain: I was reporting on a protest by small-scale fishers who had gone to Parliament to present their memorandum of demands to the National Fisheries minister.

There were about 100 fishers outside Parliament, and on the other side of the barrier were about 10 to 15 uniformed police, the minister and her communications person.

The protest had gone well and, in fact, the march to Parliament was infused with a carnival atmosphere.

I found out why when I got close up, as there was the unmistakable smell of cannabis smoke in the air. I began to notice people sitting on the pavement with bongs or water pipes, treating cannabis like others might treat tobacco.

Even more interesting, the minister didn’t get on some high moral horse and preach to them about smoking bhangi, and the police were not running around arresting smokers. In fact, they were not paying the least bit of attention to them.

It was then that I belatedly remembered that recreational use of cannabis became legal in 2018. That was when the Constitutional Court decriminalised cannabis for personal consumption by adults in private.

There are laws that still prohibit the use of cannabis outside of one's private dwelling, and buying and selling cannabis still remain problematic in law, but not to the point that the police here would drop everything to chase tens of people who lit up in public at a protest march.

Bhang use spreads more than the cops can handle
by Mwangi Githahu Columnist
Lifestyle
07 November 2021 - 05:00