Banning of ‘I Am Samuel’ is a crying shame

LGBT community should start a religion to enjoy legal backing 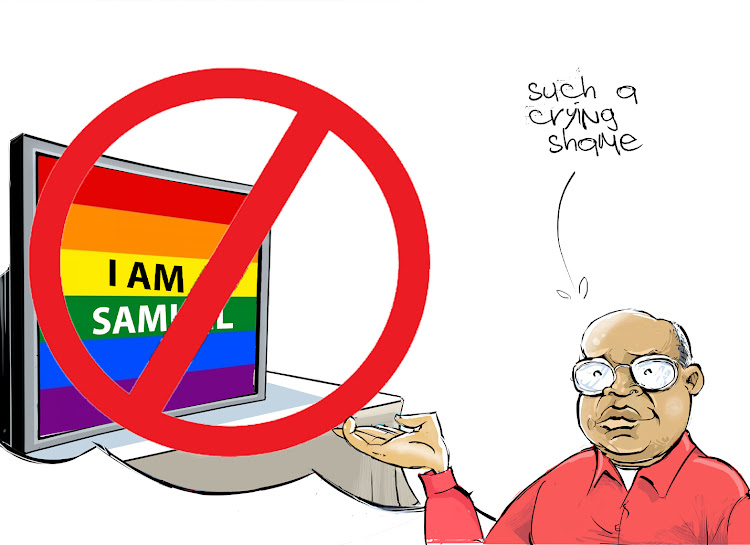 I was reading the Kenya Film Classification Board’s press statement explaining why they banned the film 'I am Samuel' and wasn’t sure whether to laugh or cry.

Acting chief executive Christopher Wambua said one of the reasons that the board banned the film was that it was “A clear and deliberate attempt by the producer to promote same-sex marriage as an acceptable way of life”.

He also says the film tries to “influence the viewer” into believing that views of Kenyans about homosexuality are changing and this is “an affront to Article 45 of the Constitution”, which defines marriage as being between two people of the opposite gender.

He said all these things are an affront (he really likes that word) to Kenyan culture and identity.

First of all, who died and made Wambua or the board the leading authorities on Kenyan culture and identity?

But I am getting ahead of myself. He was not done yet.

As well as basically being from the devil and using the powerful mind-bending force that is film in an effort to subvert Kenyan culture and identity, the thing about 'I am Samuel' that had Wambua clutching his pearls was that it had the gall to invoke the name of the Holy Trinity while conducting a same-sex marriage.

It appears Wambua and his board believe that anyone who does not believe in trinitarianism to be a heretic of some sort, which if it isn’t unconstitutional yet, should be made so immediately.

Isitoshe! The film is obviously the product of indoctrination by the evil foreigners and enemies of Kenya who funded it.

This last bit had me in mind of the days before President Moi bowed to pressure for multiparty politics from inside and outside Kenya.

Moi, whose government was constantly hat in hand to the World Bank and foreign donors, claimed without the slightest bit of irony that the opposition was foreign-funded. But why let the facts stand in the way of a good sound bite?

It would seem the KFCB sees itself as the “shield and defender” of the great Kenyan film-viewing public.

Clearly, they believe that this public, which can otherwise be trusted to decide who runs the country through the vote, who they marry, who they associate with, what religion or even denomination to follow or not, cannot be trusted to watch a film or documentary as that will absolutely change everything.

Of course, this is the same public that in May 2018 was found by one of the KFCB’s foreign partners, the search engine Google, to be fascinated with pornography. And that in 2019 was found to be the biggest consumers of pornographic videos in East and Central Africa, according to research conducted by Nendo, a local research firm.

Nevertheless, because it's impossible for rule-writers to foresee every reaction and interpretation of their laws, I think I may have found a loophole when it comes to the KFCB.

What I am going to say next may sound completely crazy, but hear me out before you dismiss me outright.

Last year, University of Oslo religious studies professor Dag Endsjø said, “The way the heartfelt beliefs of so many faithfuls include various degrees of religious monopoly and coercion means that, if this was left entirely unchecked, the rights of others would automatically be violated, not least, other people’s freedom of religion.”

In light of that, I think the LGBTQIA+ community in Kenya should start a religion. This would be the way to exploit the loophole in the Bill of Rights, which gives all Kenyans the right to freedom of conscience, religion, thought, belief and opinion.

This way, documentaries like 'I Am Samuel' and films like 'Rafiki' could be passed off as religious viewing, forcing the KFCB to find another way to address films that offend their delicate Christian sensibilities, and we could fight them in court.

‘Rafiki’ film opens the door for homosexuals to open up

“When I am around men, I feel insecure and vulnerable. I feel like they have bad intentions because of my past experiences with them. But when I am ...
News
3 years ago

How love letters got Makena suspended

Taken for therapy and prayed for, she eventually embraced 'unique' sexuality

It's a tough balance for gay men leading double lives