Under-fire LGBTIQ+ refugees are requesting urgent resettlement out of Kenya 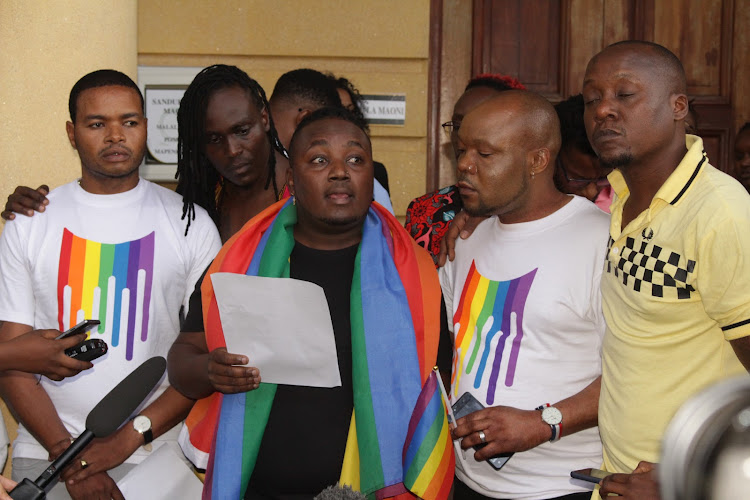 A section of LGBT members outside Milimani court on May 24, 2019, when the court declined to repeal sections 162 of the penal code, which criminalises gay sex
Image: COLLINS KWEYU

In the countries of the northern hemisphere, June is almost universally celebrated as Lesbian, Gay, Bisexual, Transgender, Intersex and Queer plus (LGBTIQ+) Pride month.

In brief, Pride month began as a commemoration of the Stonewall riots in New York, which started on June 28, 1969, when a routine police raid of a gay bar in that city sparked three nights of riots and, with them, the global LGBTIQ+ rights movement.

The Supreme Court in recent years has sent mixed messages on the conflict.
News
7 months ago

Over 50 years later, the battle for freedom and equality continues in many of the 69 or so countries where LGBTIQ+ rights are "really a non-issue", to quote President Uhuru Kenyatta’s words to President Barack Obama back in July 2015.

This year, I decided to mark Pride month with a focus on the situation in Block 13 at the Kakuma Camp in Kenya. That is one place where people like me can only dream of being somewhere over the rainbow.

For many, it is an interminable nightmare. In July last year, I wrote here about my friend Victor Mukasa’s GoFundMe page to raise relief funds for 137 LGBTIQ+ refugees on Block 13.

Refugees in Kakuma need help, if you can manage it

Michelle is my friend not wife, says Makena

In March, Makena made headlines after she came out as a member of the LGBTIQ+ community.
Sasa
7 months ago

Nearly a year later, I am writing to tell you that the attacks on the members of the LGBTQ+ community in the camp have not abated since last year.

Members of the community continue to be attacked and killed, while the UN and the Kenyan authorities don’t seem overly perturbed.

In mid-March this year, there was another horrific arson incident in which two houses occupied by LGBTQ+ human rights defenders were torched in Kakuma Block 13.

The incident left Ayesigye Jordan and Atuhwera Chriton with serious burns and in need of urgent medical treatment. Now Jordan is stuck with a sky-high hospital bill that Victor Mukasa is doing another GoFundMe for, while Chriton sadly did not survive.

The UN said in a statement after the incident: “Despite the challenges of life in a refugee camp, the overwhelming majority report to us that they have been able to live peacefully within the Kakuma community.”

However, they did admit: “This comes in stark contrast with reports of security incidents, including on social media, by a small group of refugees with an LGBTIQ+ profile residing in Kakuma, who are requesting urgent resettlement out of Kenya.”

The UN says there are now increased police patrols in Kakuma and that medical, legal and psychosocial assistance have been strengthened in the camp, but social media continues to be full of stories and pictures of attacks.

I shan't apologise for my belief that love is LOVE, she said
Sasa
1 year ago

I didn’t bother appealing to the Kenyan government for help in my last column on the issue as I didn’t really believe they would ever do anything to help that community.

Anyway, as we’ve seen numerous times, when it comes to refugees in general, the government appears to prefer to make regular threats about closing the entire camp down so they can be appeased and begged to keep it open with UN and other donations.

That said, it is a fact that Kenya remains the only country in the region to provide asylum to those fleeing persecution based on sexual orientation, gender identity or expression. Which I suppose is better than nothing, really.

Of course, it is not just in Kenya’s refugee camps where LGBTQI+ people are getting killed.

Here in Cape Town, there has been a recent horrifying spike in murders of LGBTIQ+ people that has seen at least 10 known individuals killed since February.

LGBTQI+ rights groups have urged the government to “fund, resource and restore entities that will address violence against LGBTIQ+ South Africans”.

The right groups are calling for the creation of dedicated LGBTIQ+ desks in each province to address the needs of LGBTIQ+ citizens, and for safe shelters to be provided for LGBTIQ+ people who are in crisis in each province.

We are nowhere close to being over the rainbow but for now, however, I take comfort in the lyrics from an old Donny Hathaway song: “Hey, just wait and see, someday we'll all be free.”

Artist and LGBTQ activist Kawiria laid to rest in Nairobi