The art of coping with climate change 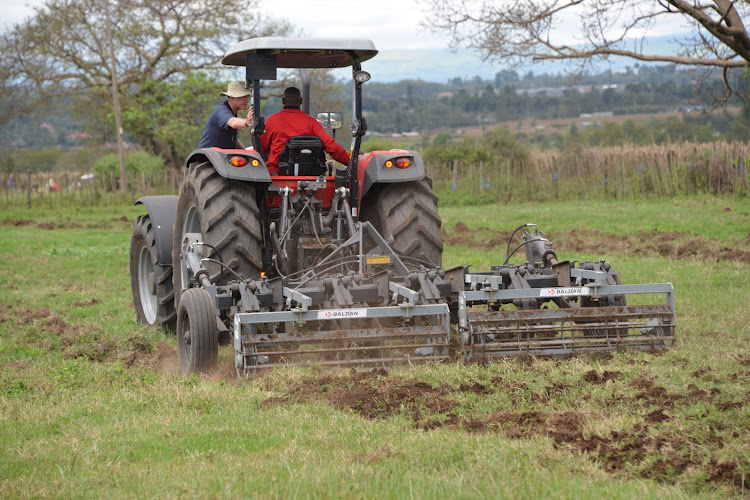 Preparing land for cultivation with a subsoiler (pictured hitched behind a Massey Ferguson tractor) preserves moisture in the soil for the production of crops by minimum tillage in dry areas
Image: HANDOUT

In a year like 2021, where the long rains in many parts of Kenya have been below average, farmers need to minimise moisture loss in the soil to counter the erratic rainfall caused by climate change. Among the measures that can be taken to reduce soil moisture loss through heat stress, the UN’s Climate Technology Centre and Network recommends minimum tillage.

This leaves crop residue on the surface of the soil, which helps reduce the evaporation and moisture loss caused by strong sunshine and wind. Furthermore, the reduction of soil disturbance from the practice of minimum tillage also preserves existing moisture in the soil, allowing crops to benefit from this during the dry periods.

Compared with the heavy cost of irrigation, minimum tillage involves moving from traditional three to four land prep activities to single passes with implements like a chisel plough or subsoiler with a crumbler roller to prepare land prior to planting.

Fergus Robley, the general manager of FMD, the Massey Ferguson distributor for East Africa, said, “The current traditional methods of inverting the soil with several passes of a harrow thereafter results in unnecessary moisture loss and soil degradation. The traditional method makes for a dry seedbed, with poor soil structure that results in crop yield limitations, especially during a year with uncertain rainfall volume and distribution.”

In contrast, preparing soil with a chisel plough or deep subsoiler protects moisture and preserves surface trash while providing the necessary aeration through a shattering action to the soil under the surface. This retention of valuable moisture is comparable to that of a forest floor with fallen leaves on the surface, which provides similar preservation of moisture by acting as an umbrella for the soil.

Preparing land for cultivation by minimum tillage using a chisel plough, or even better, a deep subsoiler helps to preserve moisture in the soil and allows for an economical one-pass cost, Robley says.

“This corrects the effects of regular use of disc ploughs and harrows over a period of years, which causes hard pans, soil structure challenges and does not protect the soils for future generations.”

The most promising boost in cereal output can be achieved by adopting minimum tillage (also known as conservation agriculture). This has been used in Brazil for years in areas with less rain than Laikipia to produce good harvests while preserving soil structure and moisture. This holds the prospect of expanding cultivating cereals to comparatively dry areas like Kitui, Makueni, Isiolo and Marsabit.

While minimum tillage cultivation is of great importance in dry rainfall areas, it is very effective for most farmers anywhere in Kenya. By preserving soil moisture, farmers in areas like Kambi ya Moto and Laikipia, which were previously thought to be marginal for arable crops, are achieving good results.

The equipment needed for minimum tillage consists of a good 4WD tractor, a subsoiler, a sprayer in sound working condition and a planter that is set up correctly to give the necessary plant population. Calibration of sprayers and planters are key for successful best farming practices.

The best land preparation is achieved using a deep tine to penetrate the soil to a depth of 18 inches (45cm) to overcome the mechanical hard pan that usually occurs at eight to ten inches below the surface, which results from years of disc ploughing and harrowing. The addition of using a crumbler roller on the back of the subsoiler provides a level and favourable seed bed for planting.

FMD East Africa is a leading machinery distributor providing a one-stop-shop for Massey Ferguson tractors and harvesters and Baldan, Jacto, Grimme, Nogueira and Enorossi implements. These premium products carry warranties. The Company provides dependable after sales service and stocks genuine spare parts at their facilities in Nakuru, Nairobi, Eldoret and Narok. FMD also has a countrywide network of dealers.