They used to cut down trees for charcoal, now tap gum arabic instead

• With water and pasture in decline, pastoralism is no longer reliable as a livelihood 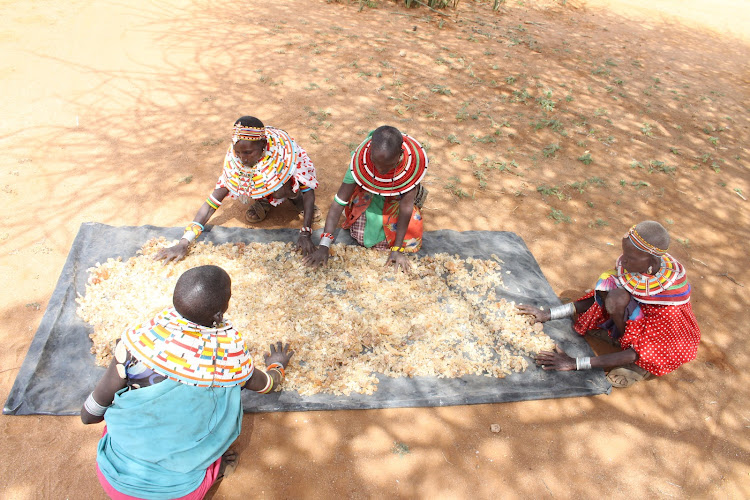 Amid thorny acacia trees and bushes struggling to green, a smaller plant defies the environment to bloom, tolerating the harsh sun and aridity that has suppressed other plants to sprout red flowers.

A hundred metres away from the special plant are seven women who, like the flourishing plant, are seeking to beat the odds to change their lives for the better.

This is Nkiseu village, Wamba ward, in Samburu East, and women are sorting out gum arabic, a product obtained from acacia trees, which grow in plenty in arid and semi-arid lands.

When the bark of the tree is bruised, it produces sap, which then dries up to form gum, a natural product that has existed for years in the wild but whose real commercial viability only started being exploited in recent years.

It takes four to five days for the sap to solidify on the tree, and you have to withstand the pain of thorns while going for the gum at the tree branches.

Tapping the trees for the sap and waiting is an exercise that requires a huge deal of patience, which only women are willing to undertake, and they are now reaping the benefits.

The seven women are gathering outside Nkiseu General Shop, owned by Julius Lekolii and his wife Carolyn, which doubles up as a collection centre for gum in the area.

After seeing a gum story on television, Carolyn, 27, decided to start tapping and collecting it, and recruiting other women into the business.

“Less than 10 women initially bought the idea, but we have now grown to up to 70 who collect and bring gum here,” she says.

She buys the gum from the women and sells it to Acacia EPZ at a profit.

“Our shop was initially one room, but now we have expanded the building to four rooms courtesy of the money from gum. My husband didn’t know of the business initially but now he supports me after seeing there is cash in it,” she says.

The mother of three, who is a Form 4 leaver, now intends to continue with her studies and pursue a nutrition course and help solve the puzzle of malnutrition in pastoral regions.

Her husband Julius admits more women needs to be empowered to support their families. 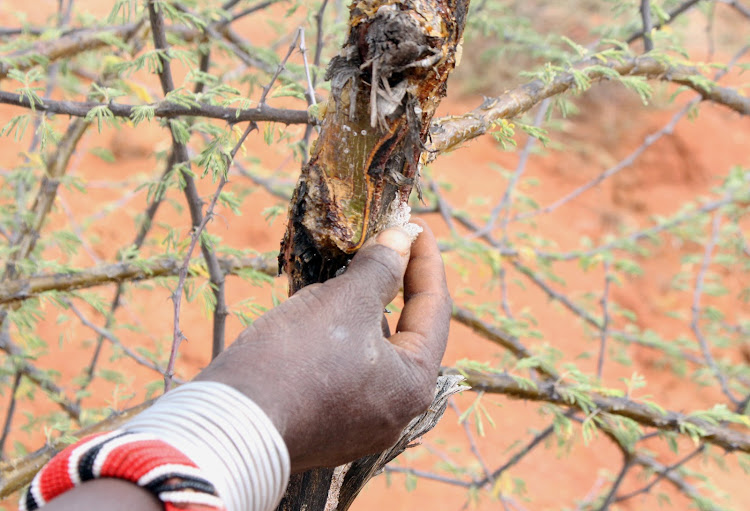 During high season, they both collect 35kg of gum in one week. They sell a kilo at Sh130 to Carolyn.

“All my camels were killed by lions in the wild. I don’t have to sell the remaining cattle as gum money sustains us during droughts, when the animals are too emaciated to sell,” Mpitaiyan, who started gum collection in 2018, says.

Sikon Lekodei, 30, fetches at least Sh6,000 from selling gum and uses the cash to buy and sell airtime scratch cards.

Her husband stays home while the children herd cattle.

“My husband sells goats, buys only cooking flour and drinks the rest of the cash. With my gum money, I buy other foodstuffs and pay fees for my daughter, who is in Form 2,” she says.

I’m conducting the interviews using a translator as the women haven’t gone to school and can only communicate in Samburu vernacular.

The women say with money, their husbands can now listen to them and consult them in the decision-making process.

In Ndikir village, Laisamis subcounty, Marsabit, Ngulisia Arabolia says she cannot allow her husband to marry a second wife, a departure from the past when men didn’t require a discussion with wives on whether to marry again.

With her newfound wealth, Arabolia has her husband’s ear and can make other decisions at home without consulting him.

For instance, from gum arabic proceeds, she has bought 15 female and five male goats after droughts decimated her herd from 100 to only 20.

According to the Marsabit County Climate Risk Profile report, compiled by The Alliance of Bioversity International and the International Centre for Tropical Agriculture, adult males make most of the production decisions on all the livestock types except chicken, where adult females dominate.

Now she has set up a shop inside her manyatta, where she sells sugar, rice, teal, cooking oil and other commodities.

“In the past, we only relied on milk and meat, but now I can afford to buy vegetables and fruits for my family,” she says.

She says with her newfound autonomy, she will make sure to educate her two girls, one who is high school and another in college.

With training she got from Acacia EPZ and other agencies, she has trained other women who have in turn formed groups to harvest gum arabic.

Lenguya now owns the only shop in the village. 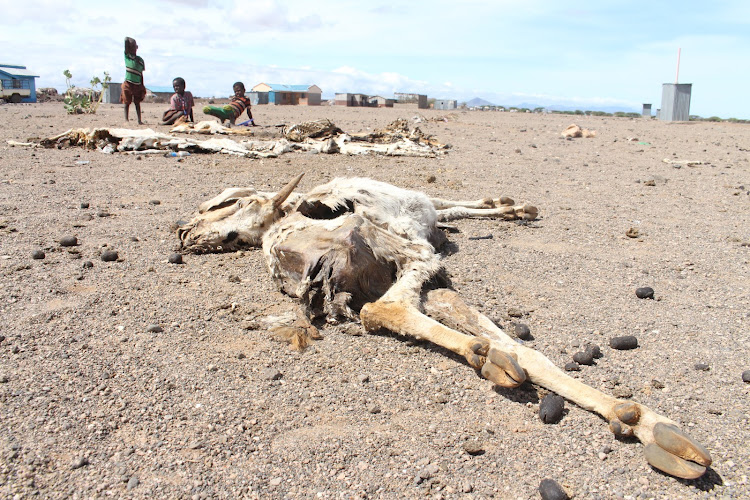 Carcasses of goats and their younger ones that died due to ongoing drought are seen at Bubisa village, North Horr, Marsabit county, on April 30
Image: ANDREW KASUKU

Kenya’s drylands, mostly found in Northeastern counties, host communities that have relied on pastoralism as the main source of livelihood for generations.

Droughts and lack of rains have seen communities between Samburu, Isiolo, Marsabit and Turkana clash in search of pasture and water for cattle, leaving both humans and cattle dead.

The CIAT report indicates that drought has resulted in losses of up to 60 per cent of the county’s livestock in recent years.

Analysis of temperature trends in the county over 25 years — 1980 to 2005 — showed that both first- and second-season temperatures have increased moderately over the years (approximately 0.5°C and 0.25°C respectively).

According to the UN, in Africa, female illiteracy rates were over 55 per cent in 2000 compared to 41 per cent for men. This, coupled with inaccessibility to resources and decision-making processes, makes women disproportionately affected by climate change.

All interviewees in Samburu West and Laisamis admitted to having lost cattle in droughts.

Most of them use the cash from gum to replenish livestock herds, killed by extreme weather conditions or stolen by bandits.

Kenya loses 2.0–2.4 per cent of its gross domestic product annually due to effects of climate change, such as drought and floods, according to a 2018 Kenya National Bureau of Statistics study.

Seitalo says before venturing into gum collection, she had cut down hundreds of trees for charcoal to sell and sustain her family.

Sam Nyamboga, founder of Acacia EPZ, says harvesting gum has given the community a reason to conserve the trees.

“When resource owners get more money, they are motivated to conserve. Effective conservation has to be incentivised conservation. You need to be able to give communities a reason to conserve trees, and an economic reason is the best,” he says.

Gum is used in the food industry as a stabiliser, emulsifier and thickening agent in icing, fillings, soft candy, chewing gum and to bind the sweeteners and flavourings in soft drinks.

It is also used as a binder in making paints and in the printing industry.

While there are many species of acacia, gum arabic is found in Acacia Senegal of variety kerensis.

Nyamboga says the main challenge in the business is getting the right quality of gum, and so his company and other actors in the industry have been training collectors on tapping and collecting clean gum arabic, sorting, storage and transporting the product.

Nyamboga's company has helped organise and register 16 groups in Samburu, four in Isiolo, 22 in Turkana and eight in Kitui.

“Together with Self Help Africa, we are doing decentralisation. We want most of the things done in the field so that what comes here in the EPZ is for advanced value addition. We want this labour to stay where the product is to make sure the collectors benefit more,” he says during an interview at his office at Athi River EPZ Centre.

Acacia EPZ is also distributing equipment to help collectors tap the trees with ease, and gloves to keep the hands from getting hurt by acacia thorns while collecting the gum. 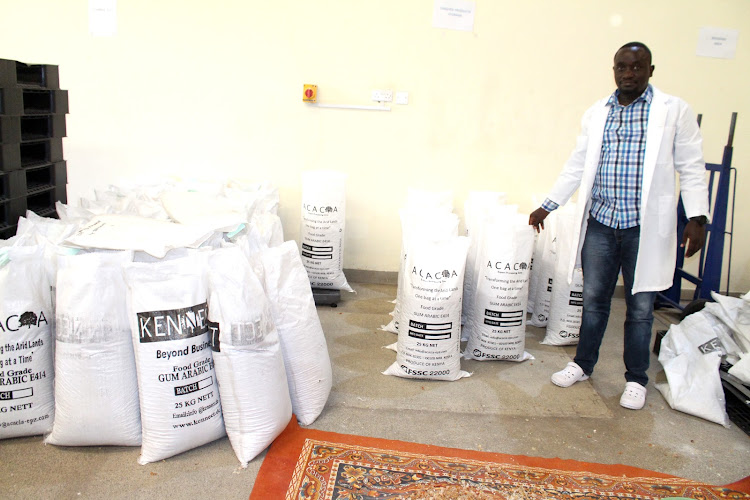 Acacia EPZ, which exports the product to Germany, is the main buyer at the Laisamis Gums and Resins Marketing Cooperative Limited, which has about 400 members.

Laisamis subcounty cooperative officer Irana Casmir says the centre, which started operating in 2015, came in as alternative source of livelihood for residents, especially women, who form three-quarters of the total membership.

Marsabit Trade executive Amina Challa says plans are underway to put legislations, embrace partnerships and set aside a budget to help communities benefit from the gum.

Self Help Africa (SHA), which gets funding from the European Union through its Agrifield Challenge Fund, is financially supporting small and medium agricultural enterprises to help them expand and achieve optimum results.

SHA seeks to address food security and nutrition challenges, and link farmers to markets through farming as a business approach, says Karaya Karugu, a portfolio manager.

He says SHA is seeking to create more than 10,000 jobs and linkages for more than 100,000 rural poor farmers and pastoralists in Kenya.

Partnering with Acacia EPZ, SHA plans to establish more than 70 bulking centres, which they intend to act as a ‘one-stop shop’ where gum harvesters can deposit their produce and at the same time purchase essential food, medical and farm supplies.

“By helping Acacia EPZ penetrate in harsh areas, it helps encourage investments, hence streamlines the value chain. By knowing where they can sell their gum, community members have an additional income stream,” Karaya says.

Kefri director Joshua Cheboiwo says Kenya has the potential to produce 24,000 metric tonnes of gum arabic per year worth Sh6 billion, which is yet to be fully exploited.