Marrying against the flow? Prepare for social backlash

• Society dictates what is acceptable, but a double standard exists regarding age gaps

• Stigma drives some couples apart, but should it be anyone's business who one loves? 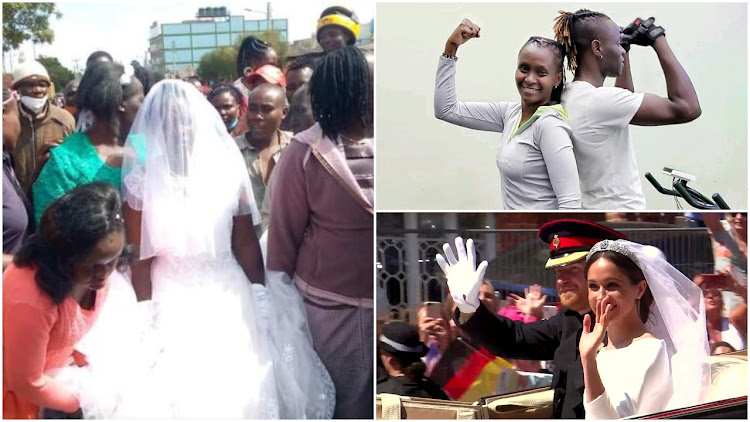 Elizabeth Nalem during her wedding at Chelengaa Gardens in West Pokot, Esther Musila and Guardian Angel, and Prince Harry and Meghan Markle at their wedding
Image: FILE

Society takes a very keen interest in romance and marriage; some would say it gets too involved in matters best left to the two individuals who have fallen in love.

Marriage and romance are sensitive subjects because they both dictate sexual behaviour, another controversial subject in its own right. Due to social interest in how people fall in love and with whom, society has created a set of written and unwritten rules to guide romantic relationships.

The written rules have to do with the law. For example, the age of consent in Kenya is 18. There is a minimum age of marriage, and there are laws to punish individuals who force or coerce others into sexual activities.

Unacceptable or unconventional relationships break the boundaries set by society. These include romance where the age gap between partners is very big, and relationships between a young man and an older woman. In some societies, romance across racial lines or social classes is discouraged. Relationships that go beyond social boundaries are not criminal by law, but they attract lots of attention.

Take the relationship between gospel singer Peter Omwaka alias Guardian Angel, 32, and Esther Musila, 51. The two got engaged in May after dating for a while amid concerns over the 19-year age difference between them. Musila also happens to be a mother of three grown-up children from her previous relationship. A lot of the criticism on social media centres on the rather low probability of Omwaka and Musila bearing children from their impending marriage. In Kenya, social expectations are that marriage and children go hand-in-hand.

One of my neighbours, a married woman, yelled at us from her second-floor balcony, telling us to find our agemates. It was crazy!

Andrew Ndwigha, 41, recalls a time in his mid-twenties when he dated an older woman and the trouble he got from society.

“I dated a woman five years older than me. I was 25 years old at the time and she was 30. I was in my first serious job. We met when I moved into the estate where she lived,” Ndwigha recalls.

“We had similar interests; we hang out at the same entertainment joints and had friends in common. It was our mutual friends who hooked us up because we were both single. However, I did not expect the resistance I would get from people around us.

“We would be walking in town normally, not holding hands or engaging in any public displays of affection, but people would make snide remarks and unwelcome comments about us.

“One of my neighbours, a married woman, yelled at us from her second-floor balcony, telling us to find our agemates. It was crazy! The societal pressure became too much and maybe that's why our relationship did not survive for long.”

Perhaps Omwaka and Musila can take comfort from the knowledge that at least some relationships between younger men and older women have succeeded. French President Emmanuel Macron, 43, married his former teacher Brigitte, now aged 68. The couple met in 1993, when Brigitte was teaching at the high school where 15-year-old Emmanuel was a student. Brigitte was 40 at the time.

Despite strong objections from Emmanuel's parents, the relationship with Brigitte blossomed. The two married in 2007, a year after Brigitte divorced her first husband. In remarks published in a Reuters article in 2017, Macron said nobody would call his relationship unusual if the age difference was reversed.

A good case in point is that of Pastor James Ng’ang’a, 66, and his younger wife Mercy Murugi, whom he met while she was a university student. 86 year old Jackson Kibor’s fourth wife is less than half his age. Brazil’s president Jair Bolsonaro is 27 years older than his wife Michelle de Paula Firmo Reinaldo. Former US President Donald Trump is 23 years older than Melania Trump.

Ethnic and racial differences have also been used to judge whether or not relationships are acceptable. As recently as 30 years ago, the apartheid policy of racial segregation in South Africa made it illegal for people of different races to marry.

Sixty years ago in the southern parts of the United States, a black man could be lynched for making suggestive looks at a white woman. In 2021, governments no longer enforce racial segregation, but romantic relations between races still attracts a lot of attention.

The ongoing saga around Prince Harry and his wife Meghan shows there still are negative views about interracial relationships. Meghan has African-American ancestry through her mother. During an interview with talk show host Oprah Winfrey, Meghan revealed that some members of the Royal Family were concerned about what skin colour her babies would have.

People don’t always get married to other people, there is a choice to marry a cause or an institution. Such marriages are not based on romance but signify a personal commitment to a higher calling. Catholic nuns were in the past considered as Brides of Christ because of their dedication to the Church, a dedication that demanded total abstinence from romantic relations.

Then there is sologamy or self-marriage, where an individual chooses to marry oneself. Sologamy was first reported around the year 2000 and has caught on across North America, Europe and Japan. Proponents of sologamy say it is about loving oneself but critics say it is nothing more than attention-seeking by desperate singles.